The US government has been accused of not giving access to information that is required to investigate the ‘white flag case‘.

In an interview with the Foreign Policy magazine, Steven Ratner – a professor of law at the University of Michigan and ex-member of a UN Panel that examined the commission of mass atrocities that occurred in the final phase of the Sri Lankan war, made this remark as he commented on the issue of Stephen J Rapp -the US Ambassador at large for war crimes, stepping down after five and a half years of service. 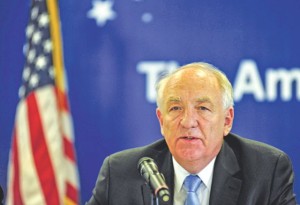 Rapp’s departure has not yet been announced, and the war crimes prosecutor did not respond to requests for confirmation. But several sources familiar with Rapp’s plans confirmed that he is leaving and that the State Department has formally launched a search campaign for a replacement, the Foreign Policy magazine said.

“Rapp had little success forcing American intelligence agencies to share information they’ve collected about human rights abuses abroad,” Ratner said as he recalled a visit to Rapp’s office during the time Ratner was investigating war crimes in Sri Lanka on behalf of the U.N. panel set up by the U.N. Secretary-General Ban Ki-moon.

He had been seeking information concerning allegations that were being levelled against the Sri Lankan officials about summarily executing senior rebel commanders after the United Nations brokered their surrender.

Ratner had heard a rumor that the U.S. Embassy had picked up some intercepts with information related to the case.

“They made it clear to us there were pretty strong constraints on what they were going to be able to share with us. . . In the end, they didn’t give us anything,” he said.

There are many accusations against the US government including pressing the case for accountability for crimes selectively and passionately and promoting the international prosecution of political rivals.

“In Sri Lanka, Rapp has conceded that it is unrealistic to expect that Colombo will assent to conduct investigations into mass war crimes by government forces during the bloody final months of the country’s civil war. But he has urged the government to at least exhume the bodies of victims in order to give their families some sense of closure,” the Foreign Policy magazine said.

Issuing a statement on his visit, the US Embassy Colombo last year said: “He heard about the progress made since the conflict, but also the Sri Lankan people’s continuing desire for reconciliation, justice and accountability.

“During Ambassador Rapp’s discussions, he listened to eyewitness accounts about serious human rights abuses and violations of international humanitarian law, including those that occurred at the end of the war. In that context the government of the United States encourages the government of Sri Lanka to seek the truth through independent and credible investigations, and where relevant, have prosecutions.

“The United States remains committed to working with the Government of Sri Lanka to promote greater peace and prosperity for all of the people of Sri Lanka. It is vital that all sides come to an agreement on events, have appropriate redress, and move forward as a unified country that upholds the rule of law and respects the principles of democratic governance.”