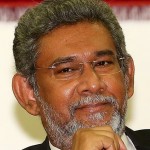 “It is my humble view Sir, if we are to progress as one Country with two nations…”  – (‘Your Excellency Our President, We Need One Country With Two Nations’- CV Wigneswaran, Colombo Telegraph, March 3, 2015)

It became known as the Two Nation theory. That was the basis on which Jinnah fought for and obtained the partition of India and Pakistan, with all the carnage that entailed. The two nation theory thus became a dirty word in neighboring India.

Chief Minister CV (“Genocide Judge”) Wigneswaran has just enunciated it in the presence of President Maithripala Sirisena on the latter’s first post-election visit to Jaffna. Of course, in order to be fair by Chief MinisterWigneswaran, it must be said that the Tamil political mainstream first articulated this claim officially, way back in 1951, a good five years before 1956 and Sinhala Only.

The Federal Party in its resolution at the first national convention held in Trincomalee in 1951 proclaimed:

“Inasmuch as it is the inalienable right of every nation to enjoy full political freedom without which its spiritual, cultural and moral stature must degenerate and inasmuch as the Tamil speaking people in Ceylon constitute a nation distinct from that of the Sinhalese by every fundamental test of nationhood, firstly that of a historical past in this Island (which is) at least as ancient and as glorious as that of the Sinhalese, secondly by the fact of their being a linguistic entity entirely different from that of the Sinhalese, with an unsurpassed classical heritage and a modern development of language which makes Tamil fully adequate for all present day needs, and finally, by reason of their territorial habitation of definite areas which constitute over one third of this Island, this first national conference of I.T.A.K (Ilankai Thamil Arasu Katchi) demands for the Tamil speaking nation in Ceylon their inalienable right to political autonomy and calls for a plebiscite to determine the boundaries of the linguistic states in consonance with the fundamental and unchallengeable principles of self-determination.” This was reiterated in and formed the conceptual basis of the explicitly secessionist Vadukkodai Resolutionof 1976:

“The First National Convention of the Tamil Liberation Front, meeting at Pannakam (Vaddukodai Constituency) on the 14th day of May 1976, hereby declares that the Tamils of Ceylon, by virtue of their great language, their religions, their separate culture and heritage, their history of independent existence as a separate state over a distinct territory for several centuries till they were conquered by the armed might of the European invaders, and above all by their will to exist as a separate entity ruling themselves in their own territory, are a nation distinct and apart from the Sinhalese and their constitution, announces to the world that the Republican Constitution of 1972 has made the Tamils a slave nation ruled by the new colonial masters, the Sinhalese, who are using the power they have wrongly usurped to deprive the Tamil nation of its territory, language, citizenship, economic life, opportunities of employment and education and thereby destroying all the attributes of nationhood of the Tamil people. And therefore…This convention resolves that the restoration and reconstitution of the Free, Sovereign, Secular, Socialist State of Tamil Eelam based on the right of self-determination inherent in every nation has become inevitable in order to safeguard the very existence of the Tamil nation in this country.”

If one is to understand Tamil politics, the North-South dialectics and the contemporary history of Sri Lanka, one must recognize that the Tamil Maha Sabhai was formed over a decade before SWRD Bandaranaikeformed the Sinhala Maha Sabha in the 1930s and that the Tamil claim of a separate, distinct nationhood and the right of self-determination, preceded what liberals have touted as the Original Sin, namely Sinhala Only.

Speaking in 1922, Sir Ponnambalam Arunachalam stated as follows at the meeting of the Ceylon Tamil League:

The historical record clearly demonstrates that Sinhala nationalism has always been reactive and one may argue, defensive, while Tamil nationalism has been initiatory, escalatory and politically proactive, even aggressively assertive.

Chief Minister Wigneswaran is thus well within the Tamil political and ideological tradition, but he is clearly stepping up the pace.

One may well ask “what is wrong in the claim of Tamil nationhood?” Probably nothing, except for the fact that the claim is made here in Sri Lanka. The Tamils may or may not be a nation, but if they are, it would be in Tamil Nadu, not in Sri Lanka. However, in Tamil Nadu they haven’t raised the slogan of a distinct, separate nationhood for decades now. In Sri Lanka, where one ethnic community amounts to almost three fourths of the population, only it can be regarded as a nation. Given the extreme asymmetry, no other community can be regarded as a nation, but only as a national or ethnic minority. The Sinhalese are a nation within a larger, potential or emergent nation, namely the Sri Lankan nation. The Tamils of Sri Lanka are an ethnic or a national minority.

As individual citizens the Tamils must enjoy rights equal to that of the Sinhalese. Indeed every citizen on this island must enjoy equality of rights, irrespective of ethnic, linguistic, religious, caste or gender affiliation. However, as political collectivities, as political communities, the Tamils do not and cannot have an equal status as the Sinhalese, not because one is superior to the other but simply because of the island’s demographic realities. In those countries that recognize more than one nation or nationality within them, there is a rough equivalence in size between those constituent communities. If every country on the planet were to recognize as nations, those communities that were under a quarter of the population, there would be enormous destabilization. There would also be complete confusion in terms of definition, because there would be no such entity as minority nationalities or national minorities!  If the Tamils of Sri Lanka are not a national minority, who is, where and why? And if the Tamils of Sri Lanka are a nation, who—which community– in the world is not? This is the path to what the late Daniel P Moynihan, writing on ethno-nationalist particularism and drawing from John Milton’s great poem, denounced as ‘Pandemonium’.

Chief Minister Wigneswaran made clear that in his view and that of the Tamil nationalist mainstream, the political solution to the Tamil Question is not and has never been the full implementation of the 13thamendment which issued from the Indo-Lanka Accord. In his latest speech he says: “Mr. Appapillai Amirthalingam and others including our present leader Mr. Sampandan on the 28th of October 1987 had foretold that the 13th Amendment could never be a solution to our problems.”

This makes it obvious that Tamil nationalism strives not to make the 13th amendment work, but precisely to supersede it. The political goal of Tamil nationalism lies at some unspecified point beyond the 13thamendment. We do not know, though we may guess, what the envisaged ‘final status agreement’ is.

What then is the solution to the conundrum? The Tamils of Sri Lanka, and indeed every citizen and community, must have institutional guarantees against discrimination of any and all forms. Constitutional amendments, laws and regulations must be brought in to ensure this. A powerful anti-discrimination Ombudsperson could be appointed. Something akin to the old Race Relations Board in the UK could be created.

That apart, there must be a continued commitment to limited provincial self-administration and self-rule, in the form of maximum devolution within a unitary framework. What this means is the full implementation, apart from Police powers, of the 13th amendment, with negotiation on the Concurrent List so as to make for balanced and equitable swaps in terms of powers.