So, we are just over halfway down the track in this 100-day sprint to keep our election promises. The public will remember that the coalition of forces determined to overthrow the Mahinda Rajapaksa regime came up with the sheaf of promises they said would be fulfilled in a hundred days. These promises included shaving off from the executive presidency all those extraordinary powers that the presidency had armed itself with, or at best, even abolish the executive presidency altogether.

Now fifty days plus, are those who voted in large numbers to oust the incumbent in the belief that the election promises would be met, satisfied with the progress and do they feel that all the rhetoric of the election campaign about ending obvious corruption and hanging the guilty from the closest kaju puhulang tree, metaphorical speaking naturally, would be kept?

Prime Minister Ranil Wickremesinghe announced the other day that a public survey was to be conducted to ascertain the views of the people regarding the progress made by the government in meeting its own deadline.

Well if the survey is conducted in an impartial and a transparent manner as it should be as has been promised by a government dedicated to transparency and good governance, and the public is to gain a more composite picture of progress made, then one would have some idea of the mood and thinking of the people.

Much would depend of course on what percentage of the populace will respond to the request to make their views known and how representative of the population they would be.

But leave the intended survey aside. The question that many people asked as the agglomeration of forces of diverse ideologies and views came together on a common platform, is how practical and practicable this 100-day programme would be. It included constitutional and election reforms and a host of other important legislation that was to transform the politico-social culture of the country which they claimed was steadily heading towards a rigorous authoritarianism. 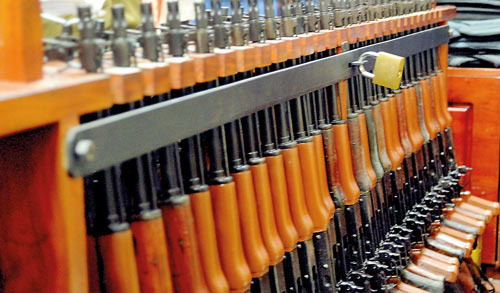 Whoever thought of this slogan must surely be a supreme optimist because the passage of all this important legislation before the dissolution of parliament which in some cases required a two-third majority, depended on factors other than the complete, united effort of that agglomeration of forces but also those outside it or on its periphery.

How confident were the slogan manufacturers that they would be able to rustle up all that support to push through the promises they had made? The fact that there is growing public criticism not only of the snail-like progress made with regard to one of the main promises about bringing the corrupt officials and politicians to book is surely a sign of the emerging public disillusionment.

One might argue that dealing with corruption issues in a manner that will eventually stand up in court if the expectation is that the guilty should pay, is not an easy task. There must surely be evidence that is acceptable and conclusive which will lead to the punishment the public expect.
But it is not just sections of the public that seem to feel it has been let down. There are more than mere grumblings among those who helped shape this assorted coalition and gave it initial leadership to be able to produce a common candidate.

The other day the Ven Maduluwawe Sobitha Thera whose organisation first took the leadership to bring disparate forces together clearly expressed his disappointment at the way things are moving. The metaphor he used was one that was locally telling. If an English equivalent is sought then it would be strike while the iron is hot.

A university don Nimal Devasiri who was very much on television screens during the election campaign arguing in favour of the common candidate himself appears to be much less enthusiastic about the direction the Government is taking.

The JVP which was not a part of the coalition but lent its support indirectly as it had as its goal the ouster of Mahinda Rajapaksa, is also becoming disillusioned especially at the slow progress made in investigating the series of allegations it has made against the Rajapaksa family and corrupt officials. The interviews give by JVP front runners and the observations they make clearly indicate their feelings.

This is the view of the Government from outside. But what of the assessment made from within the government and those who took a leading role in putting the administration together? Current Minister of Health and Cabinet spokesman Rajitha Senaratne who quit the Rajapaksa Cabinet along with Maithripala Sirisena is reported to have said the other day that he was disappointed the Government has not punished the corrupt as promised. He is said to have added that he will reveal all the culprits before the forthcoming general election.

Dr. Senaratne is also reported to have said that a private security firm has offered Rs. 300 million to a prominent minister to halt investigations into the floating armoury. He is said to have remarked that the minister refused the bribe and if the investigation into the floating armoury fails to make satisfactory progress he would reveal all the details to the public in two weeks.

It is not clear who is to make this revelation, whether it is Senaratne or the minister concerned.

Not to put too fine a point into all these goings on, one would have thought that had a bribe been offered to an individual to do or not to do something, then it is an offence under the law. The person who offered the gratification should have been promptly reported to the law enforcement authorities. Why does the minister concerned have to wait two weeks before disclosing the details of this illegal act? Surely to provide all the unsavoury details immediately would only help the investigation and not retard it?

Some days later Lakshman Kiriella, leader of the house, told parliament in reply to questions raised by the JVP leader, that the two security firms that have been very much in the news these days had paid their taxes etc, etc indicating that they had acted properly. So then what about the bribe allegation? Is it not the right time to expose this? Kiriella said nothing about the weapons that were stored at the BMICH turning an international conference hall into a part arms store.

The question that many people ask today is whether the political class is covering up for their own and the businessmen and donors who bridge the political divide.

One of the problems this government faces is that too many of its ministers and deputies are all trying to get into the act. Some seem to be looking for publicity and are speaking freely to the media, on occasion contradicting themselves because they are unaware of what others have said. There have been several such instances including on taxes following the mini budget and the controversial Colombo City Port.

This scramble for publicity especially by new comers to positions of power reminds me of the end of term concerts in boarding school. Every student in the dormitory wants to participate and even if it meant simply walking from one end of the improvised stage to the stage it is treated with such reverence and a possible academy award winning performance.

But bickering among those within the administration and the differences between the Government and what is called an opposition are causing stresses and strains among the coalition leaders though they try not to show it.

There are those who feel that attempts are being made to take President Sirisena for a ride by Colombo’s cosmopolitan set that are frontliners in this government, in the belief that he is not sophisticated enough to see the dangers ahead and avoid the pitfalls.

Moreover, some of the appointments being made to various institutions and government entities are raising genuine concerns. Last Sunday this newspaper stated that an individual calling himself Nirj Deva who is actually Niranjan Devaddtiya, has been appointed as the director of SriLankan Airlines. Those who have lived in the UK for many decades have heard of Nirj Deva who has been member of the European Parliament for some years. Those who guffawed most on reading about this appointment were those in the travel industry who wondered what a person who lives partly in the UK and partly in Brussels attending the European Parliament could do on the directorate of SriLankan Airlines operating from Colombo, except arrange for free flights to attend board meetings and accumulate air miles.

Also floating around is a story that a former secretary to the Treasury who functioned during President Premadasa’s time and was living abroad for many years has also made an appearance and been given an official position in an important ministry.

The question that is being asked is whether the country is lacking in capable and knowledgeable individuals that others should be imported to fill positions.

But one can feel that both within and outside the administration there is now a feeling that this 100-day stunt was foisted on the public more to attract the votes of a jaded and disgruntled people than as a feasible proposition.

This feeling might well be summed up in the words of Robert Frost who ended his poem “Stopping by Woods on a Snowy Evening” with the lines:
“But I have promises to keep,