Human rights defender Balendran Jeyakumari has been released on bail by the Colombo Magistrate Court a short while ago. 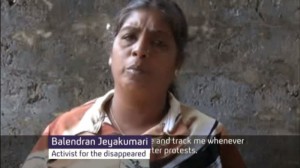 When she was granted bail, the Magistrate had imposed strict conditions, which included a ban on foreign travels and has been ordered to report to the Police each month. It was just a few weeks ago that Jeyakumari’s daughter Vibhooshika wrote to President Sirisena pleading for her mother’s release. Colombo Telegraph reported earlier this week that the government is considering her release to coincide with the Indian premier’s visit by the end of the week.

Jeyakumari (50) who was an avid human rights defender, was arrested last year in March under charges of harboring Gobi – an individual whom the previous government claimed was attempting to revive the LTTE in the country. She was thereafter detained in the Boossa camp without any charges filed against her while her young daughter was handed over to the care of the Probation department. She has been released after 362 days since her detention.