The Gazette notification on the 19th Amendment to the Constitution has been published today. 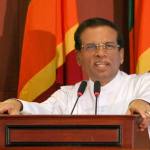 Last Sunday the cabinet decided against the complete abolition of the Executive Presidency as promised in the election manifesto, and instead decided to gazette a diluted pruning of Executive Presidential powers.

The decision was taken at the meeting of cabinet ministers this evening with the participation of President Maithripala Sirisena.

Exclusive: Abolition Of Executive Presidency Comes A Cropper; Powers To Be Pruned

By Sumanasiri Liyanage – Once again I have to depend on the legal draft of the 19th Amendment published in the Colombo Telegraph. Moreover, I am forced to assume this is authentic document although Sri Lankan press has yet to come out with the full document. There is a Turkish poem the authorship of which has been […]