Carl Sandburg – the Pulitzer winning biographer of Lincoln Carl Sandburg once noted that a politician should have three hats. “One for throwing in to the ring, one for talking through and one for pulling rabbits out if elected”

Soon after the Presidential Election Mr. Ranil Wickremesinghe threw his first hat into the ring. On Monday March 17th he used the second to speak through.

No doubt if elected Prime Minister, he will use his third.

Besieged by growing demands for accountability in the Bond trading fiasco Prime Minister Ranil Wiskremesinghe decided that attack was the best form of defense. Sadly his use of bombastic banalities as cluster bombs has not helped him to diffuse the crisis. The charge of ‘Ugly’ governance persists.

His parliamentary performance was intentionally made in English. A few concise amplifications made in Sinhala with colloquial appellations were meant to earn the headlines in the Sinhala press. 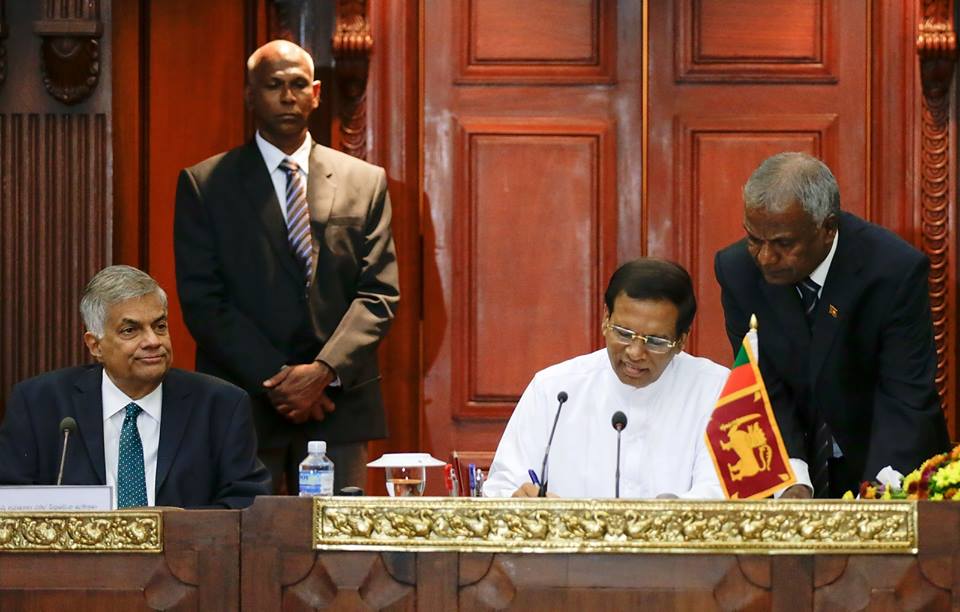 Given the furor of the storm he managed a long rambling delivery with hardly an interruption. In our parliament speaking in English is as safe and as effective as the American drone attacks over the Khyber. Hardly effective and definitely counterproductive. It also makes the fundamental error that ‘Gamaralas’ have no idea of bond trading while it may be home turf in fifth avenue Colombo and Manipay Jaffna.

He started off with a moral without a fable – Article 148 of the Constitution. “Parliament shall have full control over public finance.”

In the style of a meandering Moses quite undecided when and where to part the sea he began with the tiring terminology of the Rajapaksa Regime. The Ministry of Highways of the Rajapaksa administration had made commitments and signed contracts totaling over Rs 100 Billion, without any monetary allocation. Funds were needed urgently to meet these payments.  It was decided that Rs. 15 Billion would be required urgently. It was then decided to raise a part of these monies through an auction of Treasury Bonds.  By then, the Central Bank had already advertised the issue of Rs. 1 Billion Treasury Bonds. He was fortunate. None in the opposition dared to ask ‘Hey, if Parliament has full control over finance, why didn’t you ask us before advertising the issue of Treasury bonds?

Mr. Wickremesinghe knew his audience. Hands clasped behind his back, he bent over and surveyed the house 360 degrees. In the style of Mister Micawber he asked  “Do you know about bond trading? Does anyone here know about Bonds? The sullen silence that our Mr.Micawber was more than macabre.

In moments of naked despair the old literature can be hilariously healing. “Gentlemen,” returned Mr. Micawber, “do with me as you will! I am a straw upon the surface of the deep, and am tossed in all directions by the elephants- I beg your pardon; I should have said the elements.”

The Bull Elephant went on the rampage. He made a specific reference to two heads of private banks and asked how they received the patronage of political personalities. Ranil Wickremesinghe the crusader for good governance asked a no holds barred question. How can Mr. so & so head a Bank given the large number of surveillance referrals made to the Colombo Stock Exchange?

Now that was taking the Bull by its nose string. It demonstrated the zeal of the Prime Minister in cleansing the corporates. Yet doubts linger.

Mr. Dinesh Weerakkody his newest advisor, son in law of Mr. John Ameratunga was elected Chairman of the Commercial Bank some time ago. It was well known at the time that it was with the active support of Defense Secretary Gotabaya Rajapaksa whose loyal aide Lakshman Hulugalle was then an influential member of the board of the Commercial Bank. Mr.Dinesh Weerakkody is now a director of the Access Group which was and still is a major player in the Road Development projects of the Rajapaksa regime. Bad as they are, they need to be continued.

The criticisms leveled were ill-informed and malicious in intent. Justifying the nomination of three Perry Masons or Kavanagh QCs to probe and report he elaborated on their credentials.

One was an Attorney at Law with 27 years of experience in the bar experienced in the administration of several companies with foreign collaboration. The next was a criminal lawyer. The third was a lawyer who had assisted the then Finance Minister K N Choksy regarding Parliamentary Consultative Meetings. Next came the pathetic Lichchavi declaration which he hoped would amount to a papal bull. “I have selected lawyers who will not compromise their principles and not be got at. They also are respected in the community”

Questioning the competence of the tribunal he said was a deliberate campaign of vilifying the government he asserted and indulged in his own vilification of his detractors and named them with no interruption from the chair. Being Prime Minister has its privileges.

Anybody who has reservations about the panel could seek further details from the Bar Council.

He explained why the probe had to be made by lawyers and only lawyers. Who else could determine whether the bond in question was a transgression of the law? With that brilliant argument that would disarm a Disraeli he confined the ‘Affair Arjuns’ to a matter of legality and not of propriety. The three members of the Panel were respected members of society. They were knights of Siri Kotha.

Then emerged the epochal man. Ranil in the role of Robespierre!

“This is the age of the people –“Mahajanaya.”  I will listen to the “mahajanathawa” not to the “Maharajahs.”  No doubt he knows the common man. Malik Samarawickrema is the quintessential common man whose whispered wisdom he relies on. Then there are other common people. Some of the common people have been appointed to the board of directors of Sri Lankan Air Lines facilitating their travel to the mother country from distant London and Auckland! The concerned Prime Minister speaking on the Bond business lamented loud. “We do not even own a single aircraft. The airline requires 125 million US Dollars to settle Ceylon Petroleum Corporation dues as well as its loan from the Bank of Ceylon.”

The ‘Affair Arjun’ inflamed the gospeller in him. “Take the case of John Keells” he pointed. “The Government’s decision to cancel the casino licenses has resulted in shareholders dumping their shares. This is the only way to show their protest against questionable choices by the management” he intoned in the manner of an ascetic Calvinist. It seemed that Götterdämmerung – the twilight of the gods was at hand for some conglomerates.

Then came an absolutely uncharacteristic piece of double Dutch. He suggested that his detractors in the fourth estate should watch the film Citizen Kane. Even at the time it was made, few got to see it but the discourse that followed helped the legend of Orson Wells. Randolph Hearst refused to see the film and banned its mention in any of his papers. Both Hearst and Wells were egoistic titans. It was feud that neither claimed victory. That said it needs reminding that Hearst assault was largely successful. It was a quarter century later that Citizen Kane was revived and Welles was acknowledged for creating a cinematic masterpiece. In condemned neither man. It entered history as a chronicle of its time. Says producer Thomas Lennon “The fight that ruined them both was thoroughly in character with how they’d lived their lives.”

The irony lies elsewhere. Citizen Kane – the film is now owned by Ted Turner the pioneer of 24 hour TV news.

The Prime Minsters performance in the house is sure to be remembered. “Politicians are like warts on the body of society.” The only thing worse than warts are lawyers!