The Supreme Court hearing on the 19th amendment to the Constitution concluded today during which the Attorney general informed the SC that the amendment can be passed by a special majority in parliament without calling for a referendum as it does not interfere with the basic structure of the constitution. 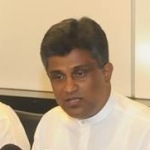 Meanwhile Acting Foreign Minister Ajith P Perera speaking at a media briefing today said if the SC verdict, which would be delivered tomorrow instructs a referendum to be held, they would be omitting the sections that call for a referendum before taking it up for debate on Thursday and Friday (April 9 and 10).

The Minister said prior to taking it up for the debate and voting, they would take into account the Supreme Court verdict on 19 A.

“Accordingly, we will be convening a party leaders’ meeting during which the SC verdict will be discussed,” he said adding,”We are of the opinion that 19A does not comprise of any sections that warrant a referendum. However if the SC calls for a referendum sections which call for it will be omitted before presenting it for debate in the parliament,” he added.