Earlier, Police Headquarters issued an official statement under the spokesperson’s name. Headlined “CULPRITS WHO DEFRAUDED FUNDS FOR TSUNAMI HOUSES ARRESTED”, the statement said two persons from a State agency that functioned before have already been arrested. The agency is Reconstruction and Development Agency (RADA), of which Mr Alles was Chairman. It functioned directly under former President Mahinda Rajapaksa and dealt with post-tsunami reconstruction work in the then Tiger guerrilla dominated North and East. Mr. Alles has admitted that he dealt with the guerrilla leader who went by the nom de guerre Poovannan. The statement said: “A company entitled RADA (Reconstruction and Development Agency) was founded under the approval of the Presidential Secretariat, in 2006, to build houses for residents of North and East who lost houses during the tsunami. The chairman of the organisation was MP Tiran Alles. ”Under Treasury budget line 803, the Treasury has issued money to RADA through the President’s office.

“Two companies to build the houses were also established. One of these companies — the BMK Holdings — has been registered using fraudulent documents, and the other company, Everest Civil Engineering, has not been registered at all. Addresses of both the companies were fraudulent. ”The money given to the organisation called RADA through the President’s Office has been diverted to a company known as Oomps Textile Limited. The Managing Director of Oomps Textile is also the Managing Director of BMK Holdings cited above: a person known as Shanti Kumar Gajan Kumar. The board of directors in the company comprises his mother and siblings.

Investigations have revealed that the money received by Oomps Textile has been taken by MP Tiran Alles and former LTTE member Emil Kanthan. ”Although the Treasury has given an amount of Rs. 645 million to RADA, not a single house has been built. It has also been revealed that Rs. 125 million of the money has been defrauded via nine cheques. ”The RADA organisation was closed down in 2006. Shanti Kumar Gajan Kumar and his mother Anandi Shanti Kumar have been arrested and were due to be produced before the Magistrate Courts. The Fort Magistrate court has imposed a travel ban (impounded passports) on five members of the Directorial board of RADA including MP Tiran Alles. The complaint was lodged by the Anti-Corruption Front to the IGP and the investigations are conducted by a special unit on financial fraud of the police headquarters.”

No sooner the statement was issued, Mr. Alles summoned a news conference to deny the accusations against him. He later accused Minister Champika Ranawaka of “implicating him in a false case.” Asked at a news conference on Friday, Minister Ranawaka hit back saying; “We have information that Rs. 800 million of the State funds had been fraudulently transferred to the LTTE when our war heroes were sacrificing their lives. Persons responsible for this should be punished without taking into consideration their social status. We are not worried about personalities, but action should be taken against those responsible for such acts. We will continue our campaign and we are not scared of threats made. The legal course of action will be followed. The people who funded terrorism should be punished. They are traitors. They are not do-gooders.”

A source at the Prime Minister’s office confirmed that representations were made to Premier Ranil Wickremesinghe to obtain his assistance on behalf of MP Alles. “He checked from different state agencies. When he learnt that the issue related to dealings with the Liberation Tigers of Tamil Eelam (LTTE), he flatly refused to intervene in the matter,” the source added.

Swaminathan misreads misdeeds
D.M. Swaminathan, Minister of Resettlement, Reconstruction and Hindu Religious Affairs, has written to the Sunday Times over a report in these columns titled “New leaders hand over Jaffna lands – with ex-President’s message.” Mr. Swaminathan who claims “this is an attempt to mislead the public” states  in his letter that “the headings and the news items carry the erroneous news that the new leaders of the government namely Maithripala Sirisena, Prime Minister Ranil Wickremesinghe and former President Chandrika Bandaranaike Kumarasinghe (sic) had handed over lands released by the Army…… with the messages of former President Mahinda Rajapaksa and former Lands Minister Janaka Bandara Tennekoon.”

He adds “Apparently, the former GA Jaffna at a completely different function held at the Kachcheri on March 24 had handed over Land Grants to some recipients of lands which contained the former President’s message and his photograph…… Action to deal with the former GA for breach of his duty is being taken.” Jamis Banda adds: Mr. Swaminathan has got his dhoti in a twist, it seems. Apart from mixing up the former President’s name, he has not understood what was written.

Should he read it again, and again, nowhere in my report did I say the Deeds bearing messages from former President Mahinda Rajapaksa and his Lands Minister Janaka Bandara Tennekoon were handed over at a ceremony on March 23 by the three leaders. The report referred to the troika – President Sirisena, Premier Wickremesinghe and former President Kumaratunga (not Kumarasinghe) – participating in a ceremony. The exact words were; “there, they only handed over the lands to those who possessed the Deed – with the messages of both former President Rajapaksa and former Minister Tennekoon. The total extent of land was 425 acres.”

They only distributed the lands – not the Deeds. The accompanying picture was that of the Deed that contained the former President’s and former Lands Minister’s messages. It is clear Mr. Swaminathan has not understood what has been reported. It meant the recipients of the land were already in possession of the Deeds. I’m told the Minister is also a lawyer.
Obviously, as he says, “”action to deal with the former GA for breach of his duty…” is after my report. In fact the GA has been transferred out. There you go, Good Governance. Bring in the 19th Amendment, Mr. President, Mr. Prime Minister and protect the public servants, quickly. 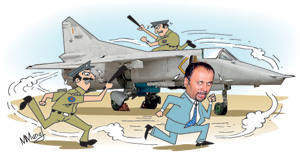 Police plan passport trap for Udayanga
Unable to track down Udayanga Weeratunga, Sri Lanka’s former Ambassador to Russia, to question him on different deals, the Financial Crimes Investigation Division (FCID) of the Police is now examining a number of measures. One such move is to ascertain whether his Sri Lankan passport could be withdrawn. Earlier, the division succeeded in having the diplomatic passport issued to Mr. Weeratunga being withdrawn.

Police sources say such a move, they believe, would leave Weeratunga with only his Ukranian passport. He is unable to use it since the Ukranian Government is seeking his arrest for allegedly supplying weapons to pro- Russian rebels fighting in that country.

Mr. Weeratunga is wanted for questioning by the FCID over ongoing investigations into the procurement of MiG-27 ground attack aircraft for the Sri Lanka Air Force (SLAF). Investigations have revealed that the former envoy to Russia was directly involved in the deal and had visited Colombo on several occasions to push it through. Police also want to question Mr. Weeratunga on the death of Noel Ranasinghe, a person described as his business partner. The body of Ranasinghe, flown to Sri Lanka and buried in the Attanagalla area, was exhumed on a magisterial order after the family complained of foul play. A second magisterial inquiry is now pending.