The clear and undisputed loser is former president Mahinda Rajapaksa. Since his defeat in the January 2015 presidential election, he has been contemplating the idea of a reentry. Because the two-term limit has been reintroduced, he certainly cannot return to power as the president. The door has been completely shut on him in this regard. Encouraged indirectly by the former president himself, his supporters have been demanding his appointment as the prime minister. The prime minister’s office has not been empowered as originally intended and the president will remain as the executive leader with almost all powers conferred by the 1978 constitution. This author does not believe that Mahinda Rajapaksa is interested in a nominal position. He wants real power. Therefore, the successful enactment of the 19th Amendment means the end of the road for Mahinda Rajapaksa. He may however, continue his present political maneuverings to protect his personal, family and supporter interests.

Opposition Leader and Sri Lanka Freedom Party (SLFP) MP Nimal Siripala de Silva is being talked about in the political arena very much these days and the newspaper cartoons too depict him very often. The Sunday Leader spoke to de Silva on the 19th Amendment and the role of the opposition in the present political context in the country

Q: Let us start with your role today, what is it like?

A: I have to act an extraordinary role which was not experienced in the entire political history of the country. This is because the president Maithripala Sirisena who came into power from the United National Party (UNP) became the leader of our party Sri Lanka Freedom Party (SLFP), a group of our MPs took ministerial portfolios and crossed over to the government. But we decided to be in the opposition. This is very crucial situation. When the president is from our party, we have taken the role of the opposition. We agreed to back the 100 day programme because only in this way we can make effective 19th and 20th Amendments. Policy wise we don’t have any barrier to support the 100 day programme……………….  READ MORE

How Mahinda benefits from 19A

The 19th Amendment to the constitution is now officially in force. Yet we have still not seen a complete copy of the Amendment. Not even the MPs who passed the Amendment really know what they passed into law. What happened last Tuesday was an example of how not to pass legislation. As the whole parliament sat as a committee to do the last minute changes to the 19th Amendment, we saw dozens of amendments being proposed and being approved by the assembled MPs. The usual procedure is that after the whole parliament sits as a committee to consider a bill, the chairman of committees is supposed to present a report to parliament and a copy of this report is supposed to be distributed to every member. Besides, the Amendments made to the Bill are supposed to be certified by the attorney general to the effect that they are consistent with the constitution and with any Supreme Court ruling on the Bill. It is only after this that the third reading takes place and the final vote is taken……………….  READ MORE

The Colombo Telegraph today learns that the meeting sought by former President Mahinda Rajapaksa with President Maithripala Sirisena is to inform Sirisena that he would not contest the upcoming parliamentary elections. 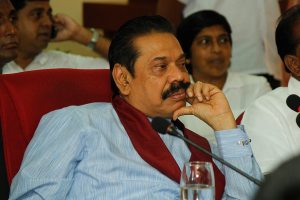 The reason for the decision is the losing of priviledges that a former President enjoys, informed sources said.

The coalition of parties which have repeatedly called for the nomination of Rajapaksa as the Prime Ministerial candidate, are set to field Gotabaya Rajapaksa the former Defence Secretary as its main candidate.

The meeting which was first scheduled to be held in the first week of March was postponed due to non availability of Sirisena owing to foriegn engagements.

The brokers of the meeting, which include Kumara Welgama and Reginold Cooray earlier said the meeting was postponed due to official engagements of Sirisena.

Cooray however, last week said that dates have been provided and the meeting between the two would be facilitated forthwith.

If Rajapaksa were to contest the upcoming general election, he would lose all privileges accorded to a former President.

The recent passage of the 19th amendment and the shift in political popularity also may have cause the former President to concede contesting the general elections, sources said……………………….  READ MORE