“According to some of the people we’ve been working with, they feel that the assets that have been siphoned off from this country by the Rajapaksa family at large may amount to 18 billion dollars” says the Minister of Foreign Affairs, Mangala Samaraweera. 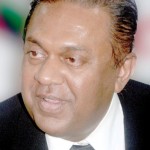 “In fact, we have done a little better than the Libyans and the others because at least we know where 2 billion is, but it is not an easy task and we are getting help and support to negotiate and get access to these funds.” Samaraweera further said.

Minster Samaraweera made above remarks today at Siri Kotha.

The spreadsheet below compares the budgets of several key ministries to the sum of stolen assets. Notably, 18 billion is equal to the annual Samurdhi budget X 42 i.e. its equal to 42 times the Samurdhi budget. 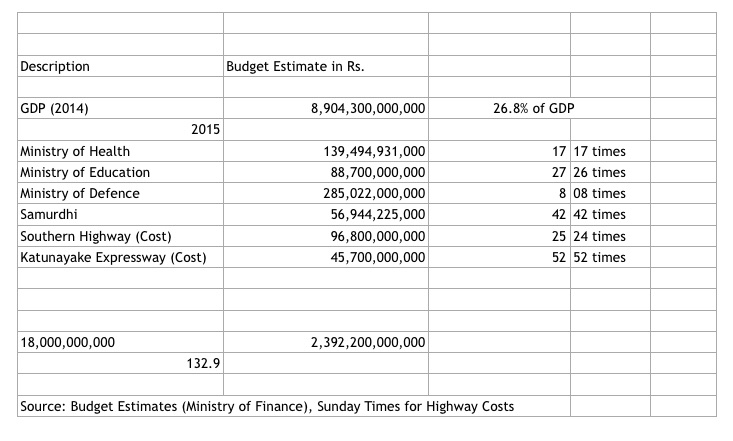 Elections: “I believe that President Sireisena has also given an assurance to the SLFP and other members of parliament that he will also see through the 20th amendment to the constitution that will introduce a new electoral system. And the UNP is very supportive of the idea but we have to ensure that the new electoral system does not marginalize the small parties and the other ethnic parties which are now represented in Parliament. Their ideas must also be taken into account. We hope that by next week we can come to some sort of agreement, and then present it to parliament as soon as possible and then go for the general elections, dissolve parliament, perhaps on the same night that we pass it (20A) in Parliament.”

Domestic mechanism: “If you look at section 93 of the 100 day programme we promised the people a domestic mechanism to look into human rights violations. This is not something we are doing out of the blue. We told them even before hand during the election, we told them during the stages. I talked about it on the stages in the deep South in Matara. Section 93 states:

“Since Sri Lanka is not a signatory to the Rome Statute regarding international jurisdiction with regard to war crimes, ensuring justice with regard to such matters will be the business of national independent judicial mechanisms.”

And now we are in the process of doing so, and we will come up with this mechanism and with of course international technical assistance and I’m sure we’ll be able to salvage the good name of our country and our armed forces by doing so.”

Domestic mechanism timeline: “We do have a timeline (for the domestic accountability mechanism). We are working according to a timeline even now. I think we will be able to meet the timeline. All I can say is that, we will have a domestic accountability mechanism in place in time when the 30th Sessions commence in September. And the OISL report that will be tabled can be referred to the Sir Lankan mechanism. They have not given us any kind of requirements, but it is our duty. This is a promise we have made to the people of this country, and we want to stick to the timeline as much as possible.

I doubt the FCID gazette will be repealed: “That is an intrinsic part of the mandate given to us by the people of this country. To look into all these allegations of wide-scale corruption which existed during the last regime. The very fact that they want it done shows that they are guilty. Because, with due respect, half of those accompanied former President Rajapaksa to meet him (President Sirisena) all have very serious allegations. It is a race against time to somehow get these investigations stopped, we have total confidence in the President that he will live up to the mandate given to him by the people of this country.”

China projects: “some Chinese projects are going, others are being reviewed. We expect the reports soon.”

Ukraine arms: we are organizing a team of people, two police officers and one official from the Ministry to go to the Ukraine, I got the Ambassador who is now in Delhi to come down about two weeks ago. He is now arranging for them to go to the Ukraine. He said any dates after the 9th which is the end of this week and once all the appointments are complete especially with the public prosecutor of the Ukraine who is I believe is aware of this deal. Moment those appointments are through will go through. (Inaudible) I have to report to Parliament when its done, lets wait till the report is out. We have now suddenly received the heavy luggage of Mr Udayanga Weeratunga to the foreign ministry. He has sent various people to collect it without any power of attorney. We have not released it. Then I beleive last week he appeared in Tehran out of all places and gone to the embassy and requested his luggage to be released. But now we have informed the investigators and the police and we are getting their advice with what to do with the luggage. The luggage is here in Colombo.

There is no warrant for his arrest. Its far too early, until investigations. Obviously his guilt his making him hide, he has become an international fugitive. This is the caliber of our former ambassadors.