Power and Energy Minister Champika Ranawaka threw a challenge at a recent ministerial meeting — expedite investigations into the cases he mentioned within a week or he would go public and name those behind the delays. The meeting was chaired by President Maithripala Sirisena.

The cases he identified, where investigations are now underway, are the floating armoury case involving Avant Garde Maritime Security Limited, the onetime Reconstruction and Development Authority (RADA) and the Bond Issue at the Central Bank.
Prime Minister Ranil Wickremesinghe promptly interjected on the bond issue by the Central Bank. “Ey issue ekay varadak nehe (there is nothing wrong on that issue),” he declared.

Minister Ranawaka’s comments came during a discussion on a Cabinet memorandum presented by Finance Minister Ravi Karunanayake. He had sought approval to increase foreign bonds from US$ 1,500 m to US$ 2500 m.
Minister Ranawaka said there should be transparency in such bond issues, and went on to speak about the three other investigations. He complained that there had not been positive action so far. He said he would publicly reveal the names of persons who were trying to stall the investigations. Two days ahead of the weekly ministerial meeting, President Sirisena (last Monday) chaired a meeting of the UPFA parliamentary group at the Presidential Secretariat. There, different MPs raised various issues. Bandula Gunawardena (Colombo District) accused United National Party (UNP) members of humiliating their UPFA counterparts. Referring to the passage of the 19A, one had said, “balu kukko vagey chandey dunna ney (you all voted like little puppies).” Former Navy officer and Ampara District parliamentarian Sarath Weerasekera protested over the nomination of Radhika Coomaraswamy to the Constitutional Council under the 19A. Sirisena replied that such issues could be resolved by talking to those concerned.

There was a humorous moment when Bandula Gunawardena asked President Sirisena to join his ranks to stand together. Mr. Sirisena replied that he and the others should join him and stand together.  Another question raised by Mr. Gunawardena was over an amendment to a Gazette notification setting up the Financial Crimes Investigation Division of the Police. This was to delete a provision that said that Prime Minister Wickremesinghe would chair the anti-corruption subcommittee that oversaw the FCID. Mr. Sirisena replied that he had raised the matter with the Prime Minister and would follow up on it.

Cutout craze comes again with all the boast 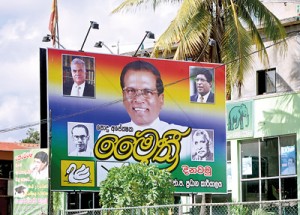 The “cutouts” season ahead of the parliamentary elections has arrived. If President Maithripala Sirisena directed that no cutouts of him be used during the January 8 presidential election, it was a different story this time. Just last Monday when he addressed the Sri Lanka Freedom Party (SLFP) district level leaders at the Vihara Maha Devi open air stadium, cutouts were placed around the park and its environs.

It carried a large portrait of Mr. Sirisena and an appeal in Sinhala which exhorted that the 20th Amendment to the Constitution be passed. In the Colombo North area, there were different cut outs. All of them carried large portraits of Finance Minister Ravi Karunanayake – and of President Sirisena and Premier Ranil Wickremesinghe. The additional segments surrounding the large portrait delivered some strong messages.

One boasted that it was the Finance Minister who had lent the money for housing projects. So, Samurdhi and Housing Minister Sajith Premadasa could not have built those houses if not for the money that was granted by Mr. Karunanayake’s largesse.
That was not all. Another claimed that the Finance Minister had brought down fuel prices, commodity prices and other items. So, casting collective responsibility to the winds, ministers are not only firing broadsides but also claiming credit for matters done by a Government as a whole.

Dwindling CWC turns to the deities
Senior members of the Ceylon Workers Congress (CWC), the largest but fast dwindling plantation sector trade union, were on a religious tour to the North this week. The team included CWC General Secretary Arumugam Thondaman. They worshiped at the Nallur Kandasamy Kovil and Nayinathivu Amman Kovil for blessings and for better prospects at the upcoming general elections.

The group consisted of the formal leader Muththu Sivalingam, and Senthil Thondaman, a provincial council member. The group met the Indian Consulate General in Jaffna for a brief discussion. There was a surprise inclusion in the group. That was Nuwara Eliya district parliamentarian Sri Ranga, who is reported to be wanting to contest on the CWC ticket.

Rajapaksa loyalists  seeking SLFP nominations
Political parties are preparing their nominations for possible Parliamentary elections. The Sri Lanka Freedom Party (SLFP) too is busy with the process.  One of the issues remaining has been whether those who are known to be supporting former President Mahinda Rajapaksa will receive nominations from the SLFP.

At a news conference this week, a journalist asked this question from Government Spokesman Rajitha Senaratne.”They may be shouting on other stages, but all of them have sought nomination from the SLFP,” he said.He was asked whether the former President’s son Namal Rajapakasa too had asked for nominations. He said he too had made an application.

Another journalist pointed out that the group supporting the former President had said there was no transparency in the selection of the candidates. ”If they want they can set up their own Nomination Board and sit before them. Then there would be transparency,” Dr Senaratne responded.

Rajitha scoffs at Mahinda’s antics
Backers of former President Mahinda Rajapaksa have been lamenting over inadequate security for him.
Last week, one group lodged a complaint at Police Headquarters over the issue and demanded that his security be enhanced.
This week, the issue was raised at the weekly news briefing by official spokesperson and Minister Rajitha Senaratne.

“We have not given him security to climb up on a wooden box (Pakis-petti) in every junction and have meetings,” he remarked. He said the Government could not provide the same security as that of a sitting President since it would amount to maintaining of another President.

Dr. Senaratne had more advice for the former President. “The best he can do is stay at home and practise his religion,” he said.
“He (the former President) seems to be now thinking if he can’t become a Mahanayaka, he can at least become a lay attendant at a temple,” he declared.

Hidden hand in Jaffna protests
Were members of a group helping an intelligence arm of the state also responsible for the recent incidents in Jaffna? This included the attack on the Magistrate’s Court after the rape and murder of a schoolgirl.

A top level investigation is now under way to determine the role of the group which had in the past years obtained financial benefits.

VIP security for liquor tycoon
Along the old Ja-ela Road, there is a mansion that belongs to a multi-billionaire businessman who operates one of the largest distilleries in the country among many other enterprises. This man has his mansion well secured with a high rise wall and steel gates not to mention the private security personnel stationed within the premises.

But if that is not enough, he has also persuaded the local police to prevent any motorist from parking alongside his main entrance and near the wall. What has happened here is that the traffic police with the endorsement of the area’s Senior Superintendent , SSP, have placed two glaring sign boards that prohibit the parking of any vehicle in front of the mansion gate or even alongside.
A senior retired traffic police officer said such public notices could only be endorsed by the local authority and not by the police.