Punguduthivu Island, 20 kilometres southwest of Jaffna, was the scene of a gang rape and murder of a teenage student, Vithya Sivalohanathan, on May 13 that triggered mass protests in the war-ravaged north of Sri Lanka. The demonstrations spread to the eastern province as well.

The protests reflected widespread anger over the horrific crime, as well as the unbearable social conditions and de facto military rule in the north. This repressive situation has continued since the end of nearly three decades of war by successive governments against the separatist Liberation Tigers of Tamil Eelam (LTTE). The LTTE was militarily defeated in May 2009.

On May 25, President Maithripala Sirisena flew to Jaffna and met with the murdered girl’s mother and Northern Provincial Council Chief Minister C. V. Wigneswaran, a leader of the bourgeois Tamil National Alliance (TNA). Main aim of Sirsena’s visit was to deflect the anger among workers and poor, and prevent the eruption of broader social struggles.

After a major protest erupted on May 20, police arrested around 130 people, accusing them of stoning the courts. Sirisena and his United National Party (UNP)-led government then unleashed a major police crackdown. About 40 of those arrested were kept in remand and 30 more youth were arrested. Police criminal investigation division (CID) teams sent from Colombo have questioned and followed youth who were released after being detained for nearly two years after the defeat of LTTE in May, 2009 as “terrorist suspects.” This witch-hunt is aimed at instilling fear and intimidation. However, many people who spoke to the WSWS expressed seething anger about the repression. The TNA and most other political parties have openly branded protesters as saboteurs or disrupters, aiding the police-government repression.

Punguduthivu is a clear example of the devastation caused by the war. It is one of the islands around the Jaffna peninsula, connected to the island of Velanai by a 4.8-kilometre causeway. Punguduthivu is a centre for tourists to take ferries to other islets, such as Nainathivu and Delft. 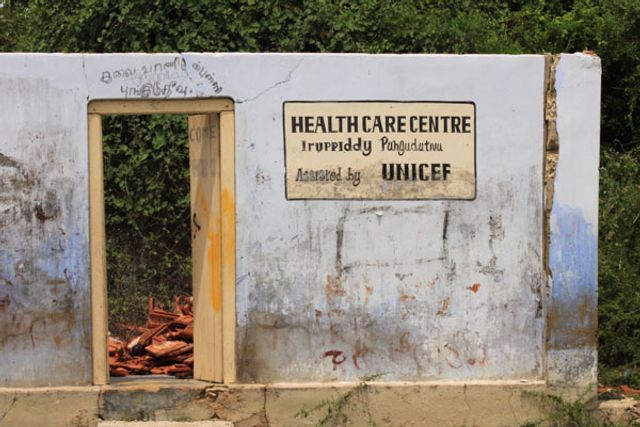 Remains of a health care centre

The navy occupied the northern islands during the war, instilling constant fear by killing alleged “LTTE cadres” and ordinary youth. The navy, as well as the army in Jaffna, worked closely with paramilitaries run by the Eelam People’s Democratic Party (EPDP). Navy camps and checkpoints remain at the entrance and the end of the narrow causeway to Punguduthivu.

From the outset of the war, which was launched by a United National Party (UNP) government in the 1980s, Punguduthivu was severely affected by the domination of separatist groups, the military and associated paramilitary groups.

One young person told WSWS reporters about the EPDP’s tyranny during the war: “The EPDP erected a camp in a school at Velanai and detained people from Punguduthivu, Velanai and Kayts for more than a year. Then they sold tobacco leaves, electronic goods and spare parts of vehicles owned by the people. Only the EPDP cadres were allowed to do deep-sea fishing. They monopolised the fish trade, compelling fishermen to sell their produce to them.”

The EPDP was notorious for vote-rigging during elections. In 1994, the group won nine parliamentary seats by alleged rigging. In 2010, its numbers fell to 3. The EPDP became a coalition partner in successive governments and its leader, Douglas Devenanda, was a government minister until President Mahinda Rajapakse was defeated in last January’s presidential election.

In 1987, under the Indo-Sri Lanka accord, the so-called Indian Peace Keeping Forces (IPKF) landed in Sri Lanka’s north to disarm the LTTE. The Eelam People’s Revolutionary Liberation Front (EPRLF), today a major constituent of the TNA, functioned as a proxy for the IPKF. Hundreds of youths were killed in the north and east in the name of hunting down LTTE cadres, until the IPKF was withdrawn. Punguduthivu villagers witnessed the collective punishments and crimes of the IPKF against women and youth.

Rapes of girls and women were part of the military repression. In December 1999, Saradambal, a young mother of three children, was gang-raped and murdered in Punguduthivu. To deflect widespread anger over the crime, President Chandrika Kumaratunga’s Sri Lanka Freedom Party government transported Saradambal’s body to Colombo and buried it there, following an official investigation. Navy soldiers arrested for brutal crime were acquitted on the grounds that the victim’s brother failed to recognise them in a court identification parade .

In December 2005, Darshini, a young girl who disappeared near a navy camp, was found dead in a well. When people demonstrated, blaming the navy, soldiers shot at them and injured one person.

Over the years, hundreds of Tamil people were arrested, abducted, disappeared and assassinated. On March 22, 2007, Socialist Equality Party (SEP) member Nadarasa Wimaleswaran, 27, and his friend Sivanathan Mathivathanan disappeared while returning from Punguduthivu to Kayts. An SEP investigation proved the involvement of the navy and the EPDP in the incident. 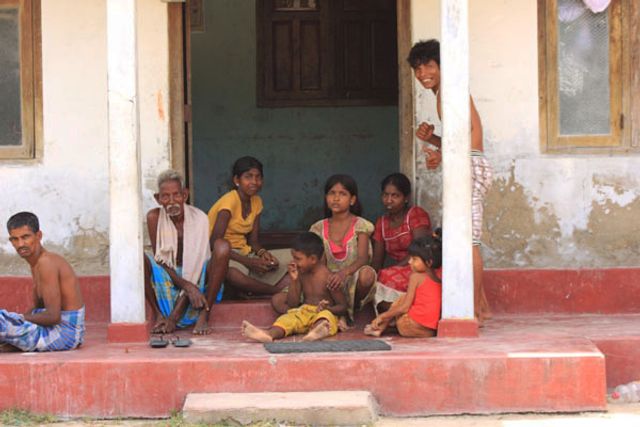 Much of Punguduthivu now looks like a no-man’s land. Just 6,000 people live there, with 17,000 displaced since the military captured the islets from the LTTE in the early 1990s. The flight of people from Punguduthivu increased after President Rajapakse resumed the war in 2006. Only a few families resettled after the war ended.

The debris of houses, schools and community and health centres remain as icons of the civil war. Abandoned houses and cultivable lands have been overtaken by jungle growth. Some families live in thatched houses. Inadequate water supply has forced residents to pay for water provided by bowsers.

On both sides of the causeway, poor fishermen set nets to catch prawns and fish—the main means of subsistence. Public transport is only available on the main road with other roads reduced to gravel from war damage and the lack of maintenance.

Vithya and other members of the Sivalohanathan family explained their experiences. Vithya’s father, Sivalohanathan, was a salesman in Colombo before he fell ill. His son had to abandon his studies and find odd jobs, such as painting and wiring.

Along with other northern people, the Sivalohanathan family fled the fighting after 1991, seeking refuge in various places, including Puthumatalan where they were trapped by devastating Sri Lankan military attacks against civilians and LTTE cadres.

The Sivalohanathan family escaped the heavy military bombardments which resulted in the deaths of about 40,000 people across the north in the final months of the war. They were among about 300,000 civilians from the war zone who were incarcerated in military-run “welfare” camps before being “resettled.” Like many others, they discovered their ruined home after returning to Punguduthivu. The family found shelter in a house owned by a relative. 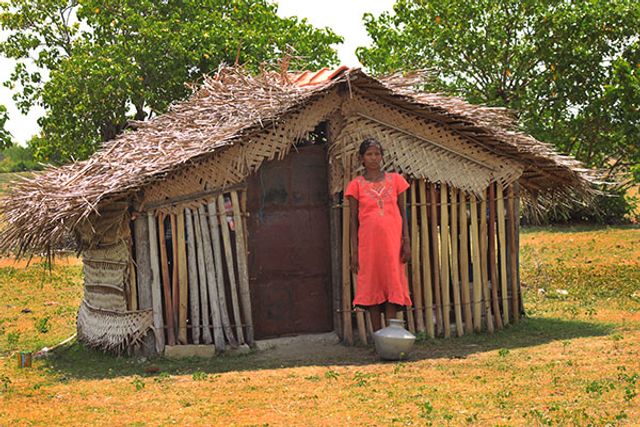 A resettled woman in front of her new thatched house

A teacher spoke with WSWS reporters about living conditions in Punguduthivu. Students often dropped out of school after ordinary level or even earlier, he said, due to the lack of facilities.

“Only 9 schools are functioning here out of 15. A few of them have ordinary level classes. Just one school has advanced level classes but limited to art subjects,” he said.

To study other subjects, students must travel to Velanai or Jaffna. Some have to walk three or four kilometres while others ride bicycles to attend schools. Teachers preferred not to work in Punguduthivu because of the high travelling costs, he added, but the lack of teachers meant that students failed exams, usually in maths, science and English. The teacher said that only a quarter of the 11 students passed the ordinary level at his school.

“Most of the people here are poor,” the teacher explained. “They do not own homes but live in other people’s homes or in temporary huts. Many students depend on kerosene oil lamps for light and they don’t have proper sanitation facilities. Moreover, their parents don’t have permanent jobs. Some children come to school with empty stomachs.”

Punguduthivu residents depend on fishing, masonry work, caring for homes owned by displaced people or selling coconuts from abandoned properties. Some gangs produce illegal liquor. People accuse the security forces and police of having close connections with some gangs and the paramilitaries.