UPFA Anuradhapura district candidate Weerakumara Dissanayake, a key ally of Wimal Weerawansa, is now under investigation as the Police have found nearly 3000 posters of the candidate being transported in a vehicle that had a fake army number plate. 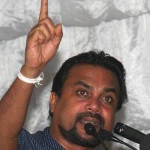 Police are conducting inquires to find out whether this had been done with the knowledge of the candidate.

Dissanayake, a stalwart of the National Freedom Front, was a deputy minister of former President Mahinda Rajapaksa government.

Police Spokesperson ASP Ruwan Gunasekara told media yestersya that two individuals were also arrested with the cab. The rear number plate of the vehicle was forged as an Army number plate, Gunasekara said.