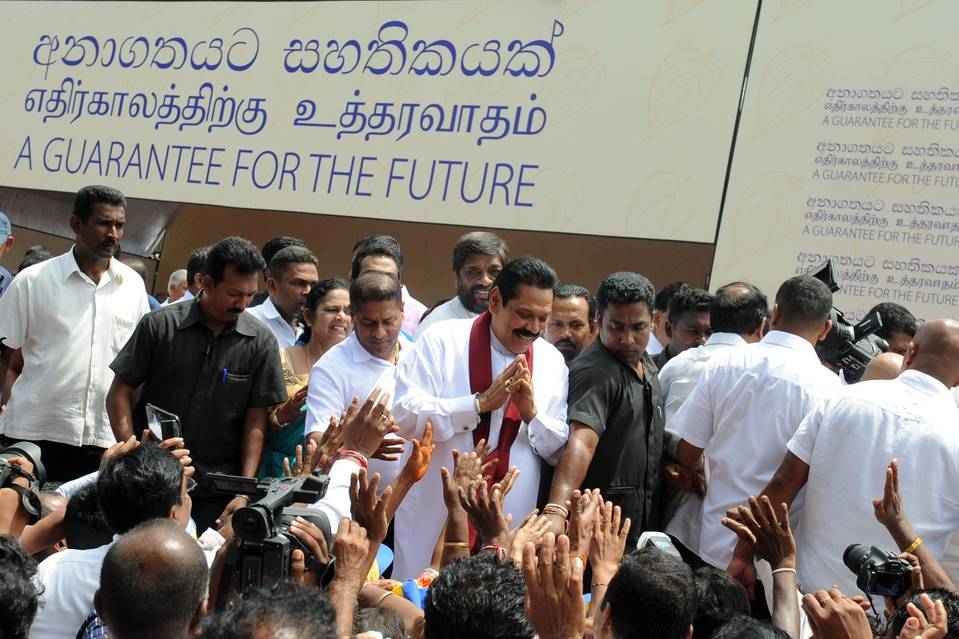 The 69-year-old politician, ousted by voters earlier this year, is seeking a return to office—this time as prime minister—in an ethnically charged campaign mixing economic promises with warnings of resurgent terror by minority Tamils, defeated six years ago after a long civil war.

If Mr. Rajapaksa and his allies win next month’s parliamentary elections, he has vowed to tighten internal security and restore strong ties with China, which wants to boost its influence in the Indian Ocean region and was a major funder of development projectsundertaken by the ex-president.

Lionized by the Sinhalese Buddhist majority for his government’s crushing 2009 defeat of the Tamil insurgency, Mr. Rajapaksa saw his support erode in recent years after what his critics painted as a turn toward authoritarianism, corruption and family rule.

A broad opposition coalition, led by people who used to be some of Mr. Rajapaksa’s closest associates, defeated him in a January presidential election, after pledging to probe human-rights abuses and graft, restore rule of law and promote reconciliation. The new government under President Maithripala Sirisena has also moved to reset the foreign policy of the island nation, which occupies a strategically important spot south of India, strengthening ties with the U.S. and other Western powers as well as India.

That is a sharp shift from Mr. Rajapaksa’s embrace of China, which extended billions of dollars in loans for Sri Lankan infrastructure projects and reaped geopolitical benefits: Last year, Chinese submarines made two port calls in the Sri Lankan capital, Colombo—a move that raised concerns in New Delhi and Washington.

Mr. Sirisena’s government has cast doubt on the wisdom of some of the projects, such as a port and airport in Mr. Rajapaksa’s hometown in the country’s south. It has suspended a Chinese-backed development project that involves creating a massive landfill in the ocean off Colombo.

There is little independent public-opinion polling in Sri Lanka, making it hard to predict who will win.

A Rajapaksa victory would be a political irony.

After his ouster, the new government, seeking to trim the powers of what they had come to see as an imperial presidency, amended the constitution to weaken it and strengthen the hand of the prime minister, now Ranil Wickremesinghe.

For the ex-president, the election battle “is a fight for political survival,” said Paikiasothy Saravanamuttu, executive director of the nonprofit Centre for Policy Alternatives in Colombo. “Rajapaksa Inc., the dynastic project, can’t stay out of power too long or it risks destruction.”

When Mr. Rajapaksa was president, a younger brother, Gotabaya, served as defense secretary; another, Basil, was minister of economic development. Mr. Rajapaksa’s older brother was speaker of Parliament and a son was a national lawmaker. Both are seeking re-election.

Gotabaya Rajapaksa is under investigation by anticorruption authorities. Prosecutors have charged Basil Rajapaksa with corruption-related offenses. He was jailed for weeks before being released on bail.

Both men have denied any wrongdoing. “What they have done was take political revenge,” said Gotabaya Rajapaksa. “There are so many investigations” of allegations against the Rajapaksa family, he said. “All are baseless.” Sri Lankan Foreign Minister Mangala Samaraweera said Colombo is working with World Bank investigators and other nations to trace “billions” of dollars that he said had been “siphoned off” during Mr. Rajapaksa’s term. He said the process is time consuming and arduous.

“It’s a lot of money, especially for a small country like ours,” Mr. Samaraweera said. But, he added: “We have to make sure due process takes place.”

Results of another investigation into the conduct of Mr. Rajapaksa’s government, by the office of the United Nations High Commissioner for Human Rights, which probed alleged war crimes and rights abuses during the last phase of the civil war and its aftermath, are due to be released in September.

Mr. Samaraweera said Sri Lanka is working out the details for a domestic mechanism to weigh the U.N.’s findings and “take action accordingly.” He added: “Those who suffered in the war also expect justice.”

Gotabaya Rajapaksa, the former defense secretary who oversaw the final campaigns of the war, said the U.N. investigation process is “very, very unfair” and relied on evidence from biased parties. “How can you say they are credible when we can’t cross-examine them,” he said.

“There may have been certain instances,” involving troops, the ex-defense secretary said. But “you can’t generalize and say the whole military is involved in war crimes.” People need to realize “what kind of enemy we were facing,” he said.

Among other things, Tamil militants used suicide bombers to assassinate Sri Lankan leaders. Thousands of government soldiers died in the war. A U.N. report estimates that up to 40,000 Tamil civilians were killed as the conflict ended, a figure the Rajapaksa government said was significantly exaggerated.

Gotabaya Rajapaksa said he and his brother, the former president, support postconflict reconciliation and worked toward it while in office. But he said it would be a mistake to ease up on precautions. “You can’t say, ‘our emphasis is on reconciliation, not security.’ That is wrong.”

“Within a five-year period, you can’t expect everyone to be de-radicalized,” he said. He said some Tamil politicians, many of whom are seeking greater autonomy for the Tamil community in Sri Lanka’s north, were saying things that could “encourage radical elements.”

“If you relax these things, you are asking for trouble. You open up a window for people who want to create trouble,” he said. “Intelligence agencies, the police, the military must be given freedom, with a legal framework, to do their work,” he said. In the central Sri Lankan city of Kurunegala, the war remains fresh in voters’ minds. “A lot of people will vote for” former President Rajapaksa, said G.M. Siriyalatha, 35. “He did many great things. He ended the war,” she said. One of her brothers was a soldier killed when his post was overrun by Tamil guerrillas in 1998. Another was seriously injured in a different attack.

Others are more focused on what came after. “People were scared. They were scared of the white vans”—vehicles human-rights groups say were used by security forces to abduct opponents of the government, said Abeysiri Pallemalla, 62. “It was like a dictatorship. Now there is law and order.”

—Uditha Jayasinghe contributed to this article.

Write to Gordon Fairclough at gordon.fairclough@wsj.com