The UN General Assembly has adopted the following definition of child poverty, on 10th  January, 2007 – “Children living in poverty are deprived of nutrition, water and sanitation, access to basic healthcare services, shelter, education, participation and protection, and that while a severe lack of goods and services hurts every human being, it is most threatening and harmful to children, leaving them unable to enjoy their rights to reach their full potential and to participate as full members of the society”. As the definition points out, measuring child poverty can no longer be lumped together with general poverty assessments, which often focus solely on income levels. It is also necessary to take into consideration, the access to basic social services, such as education, healthcare facilities, safe drinking water and sanitation, proper housing, etc.

To get a broader picture of child poverty, this article provides a brief analysis that looks at not only the children (under 5 years and under 18 years) living in Income Poor (IP) households, but also those living in multi-dimensionally poor (MDP) households.  Multi-dimensional Poverty Index (MPI) is an index of acute multi-dimensional poverty that has three dimensions: health, education and living standards. These are measured by 10 indicators, which cover most of the aspects included in the above definition of child poverty, except the last two on participation and protection. Measuring MDP is too complex to be explained in a brief article of this nature (HDR Technical Notes, provide details on the latest methodology, recommended by the UN to measure MDP). According to the UN recommendations, only the people / children living in households facing a weighted sum of more than 33.3% of a combination of the deprivations are considered to be MDP. Households facing 20% to 33.3% deprivations, out of the 10 deprivations, are considered to be “Near poor”.

In this analysis only the former is considered due to the limitations in the length of the article. However, in addition to the children living in IP and MDP households, the analysis also looks at non-poor children (those not living in IP or MDP households), but who still face some of the deprivations, such as, not having access to safe drinking water/ sanitation facilities, not attending school, etc., to draw the attention of the relevant authorities to the fact that there are children in the non-poor groups also, who are deprived of certain basic needs.  This article will only look at the total picture of incidence of child poverty at national level. However, as there are considerable regional variations, which need the attention of planners and policy makers, an analysis showing the regional picture will be published later. 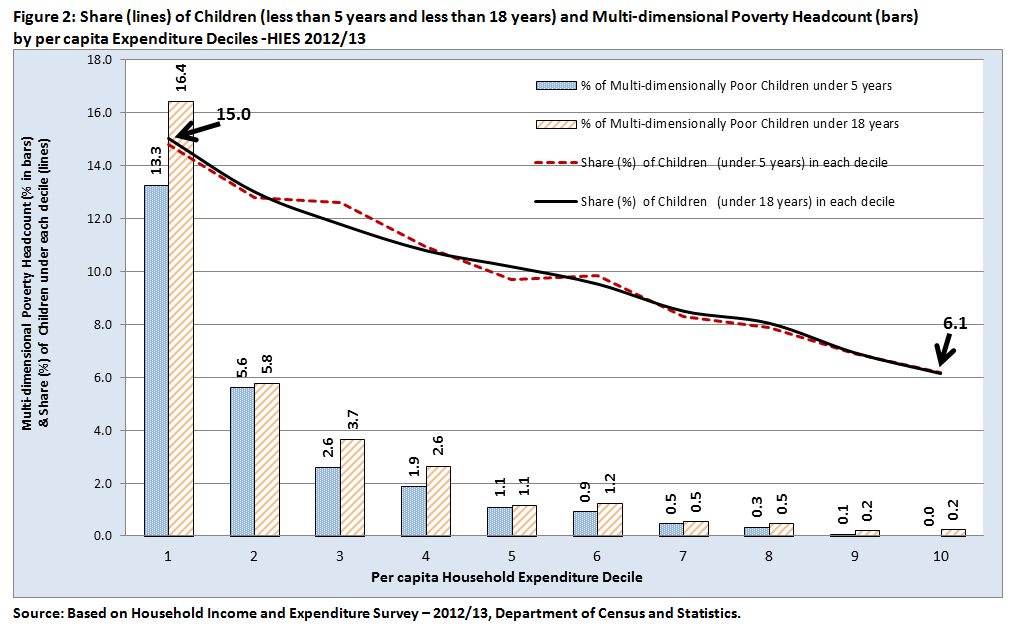 Who are the Poorest Children in Sri Lanka?

It is important to identify, children belonging to what types of Socio-Economic Groups (SEGs) are most vulnerable and poorest. For this purpose, the households were classified into 12 Socio-Economic Groups, based on the occupation or the activity of the head of the household (as given in Figure 3). The children in households affected by “IP, MDP or both IP and MDP”, were considered together (in-order to make the analysis simpler), to identify the SEGs to which the poorest and most vulnerable children (under 18 years) belong. 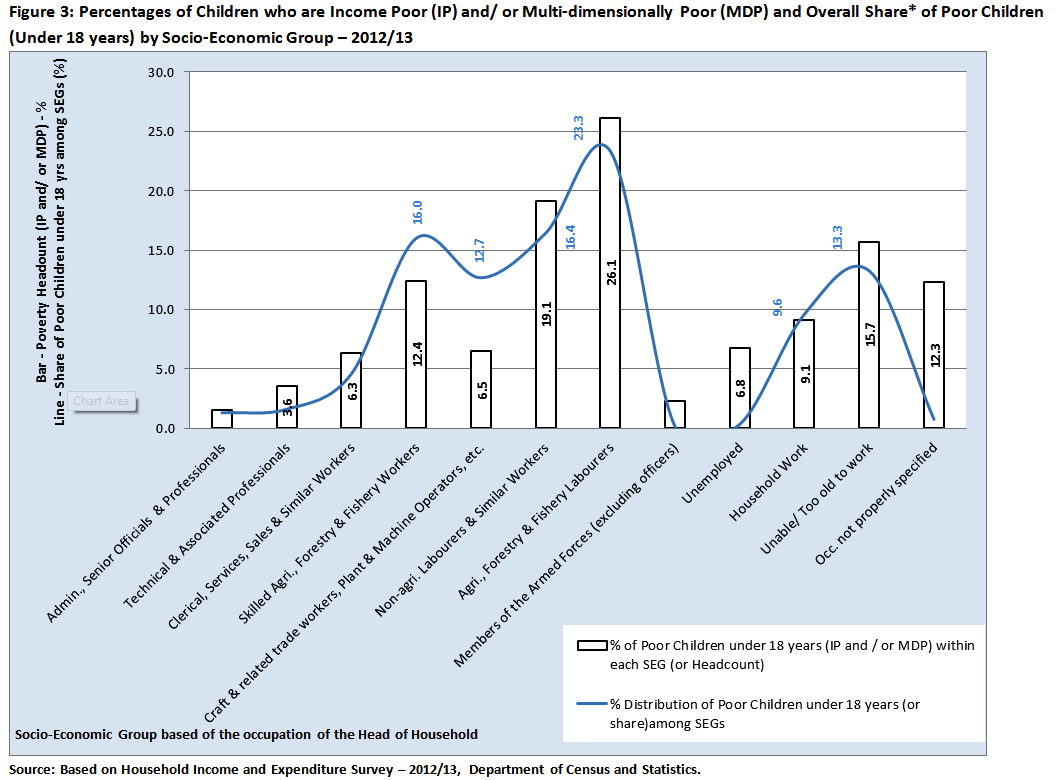 Children not attending school: Sri Lanka has almost achieved Universal Primary Education, net enrolment rate reaching 99.7% and almost 100% of pupils who enter Grade 1 reaching Grade 5. In addition, more than 98% of the children aged 11-14 years are also attending school, confirming the effectiveness of making education compulsory for children up to the age of 14 years.  However, it is observed that after the age of 14 years, some children are dropping out of school education and that they do not attend any other educational institute, as well.  Overall, 152,000 (or 16.0%) of the 984,000 children (15-17 years) are not attending school or any other educational institute. The percentages (within each SEG) of children (15-17 years) not attending school are high in five of the SEGs:  Children in households headed by (i) “Agricultural, Forestry & Fishery Labourers” (26.0%); (ii) Skilled Agricultural, Forestry & Fishery Workers” (19.7%); (iii) “Those engaged in Household work” (19.6%); (iv) “Non-agricultural Labourers & Similar Workers” (18.2%) and (v) “Those who are unable to or too old to work” (17.5%).  Out of all the children not attending school in this age group, 71.3% are from these five SEGs. In addition to this, another 16.8% are from households headed by “Craft & related trade workers”, Plant and machine operators”.