K’gala campaign: Between the rock and hard politics

After nine years at the helm as President of Sri Lanka, Mahinda Rajapaksa, paradoxical enough, is at the crossroads in many aspects. One is geographic but the others are political.

This rock city, the capital of the North Central Province, lies at the cross roads between Kandy to Puttalam and Colombo to Anuradhapura. The paddy farming district has just seen a bountiful harvest. With money in hand, the people throng the town. To attract them, candidates have paid premium amounts to hire shops paying premium prices. They have converted them into party offices to showcase their claims for votes at the parliamentary elections of August 17.

However, the political aspects are more telling. As Nishantha Wijebandara, a paddy cultivator, pithily described it in Sinhala, here was an “uncrowned king” fighting his rivals to become a “commoner” in Parliament. That a one-time President was making a bid to become a Member of Parliament from this district was not lost on him. As for becoming Prime Minister if he wins, he says “eka mata kiyanna beha” or he cannot say it but adds, “eyata prashna thiyanawa” or he has problems. However, J.K. Punchihewa, a businessman in Kurunegala said Rajapaksa should have gracefully retired when he ceased to be President.

That no doubt has placed Rajapaksa on a bigger political crossroad. Even if he has not been named the campaign leader by President Maithripala Sirisena, who heads the Sri Lanka Freedom Party (SLFP), he is playing that de facto role and it is taking him to most districts and electorates countrywide. Thus, a good part of the campaign in this district has been left in the hands of his brother Gotabaya Rajapaksa, the former Defence Secretary.

Together with a group of supporters, he is busy conducting ‘pocket meetings.’ The venues are mostly temples and the crowds are usually a hundred or two. The thrust of his speeches are two pronged. After recounting his years serving as an Army officer in Kurunegala, Gotabaya says the country would face bigger security threats if the UNP is voted to power. He refers to the ‘uneasy’ conditions that prevail in the North. He also delves at length on the Central Bank bond scandal. Gotabaya has also addressed groups of businessmen and professionals from community centres in the area. He has emphasised that for business to thrive security is a crucial factor. An important meeting in the coming week would be one with the soldier families.

Like in most parts of the country, the on-going polls campaign is less visible, thanks to the Commissioner of Elections Mahinda Deshapriya. Yet, there are cutouts and posters in some areas. Some of them are in the party election offices. One large cutout of Rajapaksa greets those travelling to Wilgoda, just a kilometre away from the town. Similarly there is a cutout of UNP candidate Akila Viraj Kariyawasam. 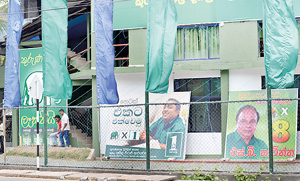 A location that has drawn UPFA crowds is the office of S.B. Nawinna. This time it is adorned with green flags. He joined the UNP and is contesting on their ticket.  Youth who supported the former President Mr. Rajapaksa at the presidential election in January this year are now backing Mr. Nawinna. Outside the office several youth were getting ready to set out on the campaign.

The campaign of the United National Party (UNP) is varied with different candidates making a bid for preference votes for themselves while campaigning for the party. Ashoka Abeysingha, a former MP re-contesting for the UNP in the Kurunegala district said the party’s position has strengthened since the start of the campaign.

“People who voted for Mr. Rajapaksa in January have turned to us. I daily have 30 to 40 SLFP members joining our party,” he says. The UNP, in addition to focusing on the main meetings is focused on pocket meetings where the candidates have been explaining to the voters about the corruption that took place during the previous government’s tenure.

“At the Presidential election, President Maithripala Sirisena whom we supported was defeated by 85,000 votes,( in this district) but this time we hope to win with a margin of 100.000 votes,” he said. The UNP campaign in Kurunegala has spread out into the villages. 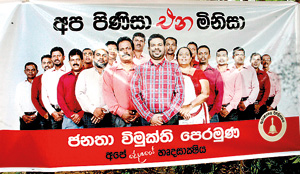 “For the first time after several years the UNP has been able to put up its strongest campaign under the elephant symbol and the green flag. This has added to the enthusiasm of the party supporters. This will result in more of our supporters coming out to vote,” Ashan Cooray, a UNP activist in Ibbagamuwa said.

He said, both at the 2010 and 2015 Presidential elections some party supporters were reluctant to vote as the UNP told its supporters to vote for the Swan symbol. But this time it is going to be different as the party members know that they are on the winning path,” Mr Cooray added.

The UNP’s campaign has been strengthened by house-to-house canvassing where groups of supporters have been distributing printed propaganda material. The campaign by UNP provincial council member, J.C.Alawathuwala appears to be gaining prominence among other candidates.

The scale of violence and election related offences in the district have been low compared to previous elections.
“We feel that one of the main reasons for the low scale of violence between rival parties and even supporters among candidates of the same party is due to the strict implementation of the laws related to display of posters,” Aruna Mallwaarachchi, 43, a resident of Wehera, Kurunegala said.

He said that even in interior areas the respective police stations were strictly enforcing the laws regarding cutouts and posters.
Businessman Ananda Pathirana said that in contrast to previous elections there is no overt distribution of goods and dry rations to be seen. The city too remains clean, he said.

Candidates instead have opened the maximum number of electoral offices permitted in the district to make inroads. Grocery shops, garages and houses have been turned into electoral offices of candidates where preference numbers and cutouts are displayed. Meanwhile former President Rajapaksa’s decision to contest in the Kurunegala district and his presence in the area for the campaign has created interest among the UPFA voters in the district. Mr. Rajapaksa met the business community last week as part of the campaign while the final UPFA meeting, next Friday, is to be held in Kurunegala town.

“The presence of Mr Rajapaksa has activated the campaign which otherwise would not have been too interesting. However, some of the leading members of the SLFP believe that their preference votes will be reduced by the former President contesting in their district,” a UPFA supporter, Anuruddha Jayasinghe, a trader from Wariyapola says.

In contrast to the previous elections government employees including senior officers have not been forced to get directly involved in the campaign. “We were forced to write letters to invite officials and the public for various meetings which were actually unofficial campaigns during the last presidential election. However, this year we feel that there is no such pressure on us,” an officer attached to an AGA’s office said.

He said that in some cases they were forced to give false promises to the public as a means to attract them to meetings.

The Kurunegala district, remains crucial for the main political parties as it returns the third highest number of MPs – 15 to parliament and has 1.2 million registered voters.

Besides Mr. Rajapaksa the UPFA has several former ministers and deputies such as Anura Priyadharshana Yapa, Johnston Fernando, T.B.Ekanayaka, Shantha Bandara and Salinda Dissanayaka in its list in addition to Chief Minister Dayasiri Jayasekara who quit the UNP and joined the UPFA.

The UNP in its list has ministers Akila Viraj Kariyawasam, Gamini Jayawickrema Perera and S.B. Nawinna while former MPs Nalin Bandara and Ashok Abeysinghe are also contesting. In addition several ex-provincial council members are in the running.

JVP
The JVP which is also set to make an impact in this district is led by Namal Karunaratna, a former provincial council member, the National Organizer of All Ceylon Farmers’ Federation and a Member of the Central Committee of the JVP.

At the 2010 Parliamentary elections the UPFA returned 10 members while the UNP gained five seats gaining 64 per cent and 32 per cent of the votes respectively.  Both, the main parties have expressed confidence of victory in an evenly fought battle in the Kurunegala district, but the outcome will be known only by August 18.