Bankrupt Mahinda and his politicos eat humble pie trying to secretly enlist TNA to form Govt.- TNA tells them off ! 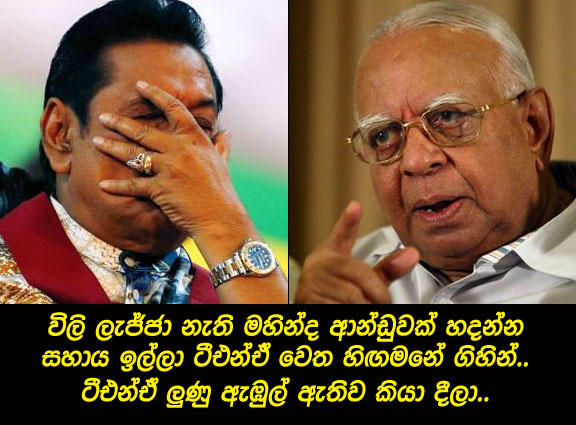 (Lanka-e-News- 21.Aug.2015, 3.25PM) A most disgraceful , deplorable and disdainful   attempt had been made by Kurunegala district M.P. Mahinda Rajapakse the notorious most bankrupt politician in recent times ,after discarding the people’s mandate to enlist the assistance of the TNA to form a government .

Unfortunately for him this conspiratorial move was  rejected in toto by the TNA, based on reports reaching Lanka e news.

The dejected and defeated  group comprising Mahinda Rajapakse , Vasudeva Nanayakkara ,Dallas Alahaperuma, Wimal Weerawansa ,Tiran Alles and Dinesh Gunawardena in a desperate attempt like a drowning man clutching even at a straw had met with TNA parliamentarians Marvai Senathiraja, M.A. Sumenthiran , M. Saravanabavan and TNA leader R. Sampanthan and said , if they help them form a government, the politically  bankrupt group led by Mahinda will in return grant  administrative powers  to the TNA that will be equivalent to a federal administration. The most contemptible and traitorous part of this overture is , this is absolutely running counter to the UPFA  election manifesto .

It is no secret that Mahinda Rajapakse group of the UPFA during the general elections carried on a vicious campaign against the UNP , and were openly anti Tamil following racist policies .

Hence , the sordid media coolies trying to conceal these latest  most shameful moves and maneuvres of the Rajapakse brigands who would not only sell their souls but even the nation if those could only propel them to power is most reprehensible .

The media that should reveal such treason ,  treacheries and perfidies in the best interests of the people and the country , instead descending to the lowliest   level even worse than that of the latrine coolie is unpardonable and inexcusable. Even the ink in their pens would curse them for using the saliva instead to lick the evil powerful choosing the best  places where their  stench is worst.

Marvai Senadhiraja rejecting the request in toto had told directly and categorically to machiavellian Mahinda and his crooked group  that , though it might be the habit and hobby of the Rajapakses to let down the Sinhala people and the country , the TNA does not belong to that ilk , and they  will never stoop to that level –not for all the world ! The TNA will never betray the Tamils under any circumstance even in a dream , he had pinpointed.

The TNA representatives had also made it abundantly clear to these unscrupulous bankrupt bunch of politicos led by notorious machiavellian Mahinda , the TNA  conducted its politics in the north during elections without exerting any pressures or influence whatsoever on the politics in the south nor join in that , while Mahinda and his group were engaging in politics of racism instilling communal hatred among  the Sinhalese against the Tamils. Therefore nothing can be more ridiculous ,ludicrous and even traitorous than this present effort of the main political groups led by Mahinda to seek the TNA support to capture power at this juncture, the TNA representatives have pinponted.

The Mahinda Rajapakse led group was thrown out of power on January 8 th on a people’s mandate , and it was a verdict given by all communities standing together. Hence , the TNA cannot take any decision that goes against that verdict , the TNA had pointed out clearly to ex president Mahinda Rajapakse.

Mahinda and Dinesh Gunawardena were obviously enraged at these exposures even though those  enlightened them on the true picture and opened the minds of these culprits , who having no answers to give had left the venue crestfallen , yet   full of fury . Some who saw the sad spectacle of humiliated Mahinda and his group of culprits departing  were of the view , they left as  sadder but wiser men after all the conseling .

By -T.Jayakumar
Translated by Jeff