Mahinda Rajapaksa (MR), his posse of crooks and gangsters and the cohorts of racist rabble rousers incited by Wimal, Gamanpilla, Dinesh and heaven knows why Vasu, have been seen off. MR energised the UPFA campaign but his presence steeled an opposition that ensured its downfall. Every Muslim in Lanka voted him down; the Negombo, Colombo North and West and Nuwara Eliya results illustrate total consolidation of anti-MR sentiment in the Catholic and Tamil communities; the liberal middle classes vomited en mass. A nightmare has been averted but the next step in Lanka’s voyage has not begun. The way ahead is daunting and dimly lit but it would be wrong to greet the new government with cynicism. We must step forth in a positive frame of mind but at the same time not be naïve or have illusions about obstacles on the way. First I have to pause and congratulate the champions who won landslide victories. Mahinda Deshapriya and his Elections Department staff, by recent Lankan standards, were exemplary. Recall the fate of independent Chief Justices under MR or JR, or the previous constraints on Deshapriya himself. Congratulations also to the police and a multitude of government servants whose commitment is worthy of praise. Given freedom from political interference Lanka’s public service can rise to the occasion and give us confidence of continuing improvement. Let us remember to back public servants against errant politicians; when next you see a moneybag or a wayward politico harass a policeman or a public servant, speak up and intervene in support an officer doing his duty. Build direct trust between citizens and public servants and bypass this breed of political middlemen. 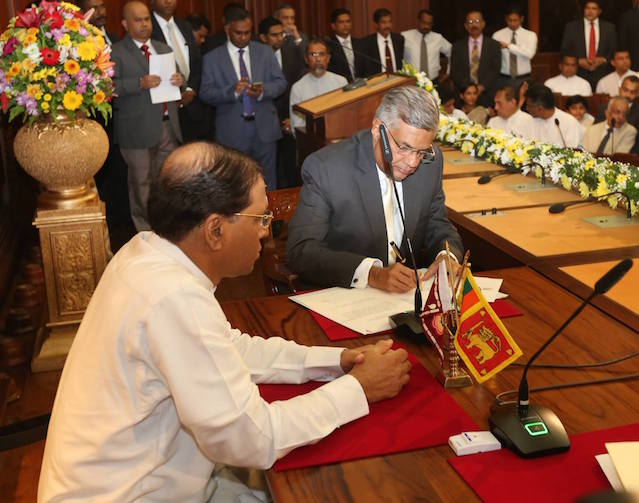 To prepare for a journey one must make prudent prior judgements about what to expect along the way. Expectations may prove wrong, too optimistic or pessimistic and entail midstream course correction, but there is no way to face the “What shall we do” challenge except by first asking “What is the likely trajectory of this government”. Who is the ‘we’ that I refer to? It is a wider throng than leftist like me; a large multitude came together to defeat Rajapaksa – democrats, leftists, civil society activists, religious groups, artists and plain citizens – that is my ‘we’. The ‘they’ who ‘we’ have to relate to are the political leaders, policy makers and of course the bourgeoisie and the bureaucracy who call the shots. Thankfully M&R types of bourgeois democratic states are susceptible to ‘our’ pressure.

Three dimensions of the RW–MS government need exploration; the Democracy Question, the Economy Question and the National Question. Quick, useful judgements are not difficult. Ranil-Maithri (R&M) will be better than the Rajapaksa alternative on the National Question, that goes without saying, but it will also be agreed by the ‘we’ that the minorities will see improvement not only in relative but also in absolute terms. For example though federalism will be rejected, harassment and the climate of fear will ease and land and resettlement related matters will advance; this despite Wigneswaran and Gajendran’s truculence – futile truculence that the Jaffna voter yet again rejected. The Muslims for their part see their leaders well ensconced on the inside track.

[Observe I use R&M or M&R interchangeably as appropriate. Taking account of political realities Ranil more than Maithri is the source of power at this moment, so mostly it’s R&M. However, and this is imperative for stability, I envisage a continuing smooth working relationship between them]. Concessions to the Tamils on territorial and devolution matters will be constricted by fear of a Sinhala backlash – the defeated ghouls have nothing to disrupt the government with but rabble rousing. What is one to make of a public that can be led by the nose into communal epilepsy over and over again for 60 years? I am truly troubled by this perhaps unique instance of unremitting mass ethno-hysterics. That is an aside; the point here is that though RW and the current UNP government are not chauvinist, neither do they have the political clout or moral courage to stand against communalism. Right now it is President Sirisena’s missive to MR demanding an end to inflammatory racism that is more inspiring.

The big risk now is on the other foot: Will portions of the UPFA racist rump that survived the 17 August debacle attempt incitement? President Sirisena, both as SLFP leader and as head of state, has his work cut out for him. His strategy, welcome by RW, prepares the ground for a national government. This is one motive for Sirisena’s albeit questionable machinations within the SLFP. The other motive is a long overdue cleansing of the Aegean Stables of Rajapaka muck and toadies within the SLFP and UPFA. On this matter Sirisena must be unrelenting and ruthless, or he will rue the day he softens his resolve.

The JVP though no longer as Tamil-averse as before is unlikely to assist in making concessions to Tamils, but it will be helpful about soothing the Muslims. R&W may be stuck between a rampaging UPFA, a pleading TNA, a truculent Wigneswaran and an unhelpful JVP, if it were to appease Tamils. Taking everything into account a plus ½-point award on the advance-expectations scorecard in respect of the national question is in order.

Democracy, good governance, less corruption, and law and order will see improvement. In the long run however be alert because the GG name notwithstanding, the UNF will have its share of crooks. Aggressive public, civil society and media intervention, more aggressive than in recent months is needed. Though some analysts assumed the UNF-JVP trade-off was be a zero sum game (a seat for the JVP would be one less for the UNF) as I foresaw in last week’s column it was quite different. The JVP campaign hugely damaged the UPFA and accounts for the decline in its votes much more than hapless police inquiries and anaemic legal interventions.

RW surely will not trample on democratic rights and misuse police and judiciary, at least in the first instance, to the extent the Rajapaksas did. I hope future governments will take note of the bloody nose MR was given, twice, 8 January and 17 August, and never again venture on the ghastly path of abuse and intimidation. But let us not store too much trust in personalities, RW included. The Batalanda horrors are shrouded in fog, so I suppose RW is entitled to the benefit of the doubt until something definitive is revealed by RW himself or by others. Nevertheless let us stay on guard as under stress this government too may lean to authoritarianism. I awarded ½-point on my advance-expectations scorecard for the national question; to be consistent I will have to mark the government at ¾-point on the democracy-cum-GG item.

I am disappointed that my call for a tactical vote for the JVP in selected districts failed to win converts or get prominence in print though it did get attention in the electronic media. The JVP garnered an impressive 540,000 votes but managed a total of only six seats; not enough to make an impression in parliament and not consonant with the huge responsibility that now devolves on its shoulders and the proven ability of its leaders. The rejection of Rosy is another example of Lanka’s voters making wrong (soda bottle) preference choices.

The riffraff in the UPFA preference choices is a consequence of its election strategy – Rajapaksa at the top, Tiger-behind-every-cadjan-fence racism, nomination of deplorable candidates and a photocopied-from-somewhere programme. The UPFA brought back into parliament stuff like Johnston, Arundika Fernando, Keheliya, Ratharan-Hora Rohitha, Mahindananda Aluthgamage and Nimal Lansa, and what a pity it threw out Mahinda Samarasinghe. And my god the UPFA’s batch-toppers in Colombo were incendiary rabble-rousers, Weerawansa and Gamanpila. This turnout of buffoons is all of a piece of what has happened to the UPFA and portends a raucous parliament, particularly if MR decides to enter the chamber and allow his presence to be the focal point of a vermin cluster. This makes Sirisena’s intervention to clean out the SLFP doubly important before the habits of the next parliament become set. The RW government will pursue pro-business policies, that is foreseeable, but it cannot adopt blatant neo-liberalism as JR did. There is no room for rank neo-liberalism either internationally or within the domestic balances of power. There will be privatisations, some necessary to improve efficiency some to sweeten the gravy train for businessmen. The Arjuna Mahendran case and an attempt in the 1990s as Minister responsible for BOI to the bully then Director of Telecoms and push through a price inflated duopoly (SLT was already a licensee) telecoms system with Singapore’s Call-Link company as an investor reveals RW’s stubborn streak. I don’t dispute that he is financially clean but he has an inclination to stand by friends even when they are wrong. Checks and balances are always been essential in politics, more so now given RW’s clout in this government. We don’t want an MR again, not even an uncorrupted one; and no thank-you a for 21-st Century Lankan Lee Kuan Yew either.

Political necessity and the nature of coalition government will ensure populism in economic policy; those who envisage a tough austerity programme are barking up the wrong tree. RW’s 60-month programme is all well and good but has to be guided by intelligent directive principles. We have to wait to see the ideology behind this coalition government’s directive principles. On the investment there will be balance between China, the West and India. Hence on the Economy Question an award of ½-point is in order, bringing the total to one and three-quarters out of three in respect of my three advance-expectations.

This government won’t be a monolithic UNP animal, it will be a mish-mash; it will be a UNP-SLFP national government with SLMC and Champika partnership, some left and upcountry Tamil input and under obligation to a variety of civil society pressure groups.

It will reflect a Sirisena presidency and a RW PM-ship. Stabilising support will come from the TNA. It will be malleable and there will be space for independent activity, influence and manoeuvre. This is the crucial point that tips the scales in favour of affirmative engagement. At the same time I believe that in the long run the force for change on the left will be the JVP, but that’s a topic for another essay.