My August 16th column headlined “Beware of Blair bearing fibs” appeared two days after the Blair family– or some thereof — arrived in Sri Lanka for a two-week stay.  In retrospect I think it would have been more accurate if I had said Blairs instead of Blair to include Cherie in the Blair bundle. The sales pitch she made while supposedly on a private holiday is admitted in an exclusive interview she gave and published in this newspaper last Sunday.

“I would always be delighted to help, particularly a country like Sri Lanka,” the wife of Tony Blair replied, when asked whether she had offered assistance to the Government. Pressed on whether she had directly indicated this, she laughed and said, “Obviously……”

It would appear that she has been more aggressive than her husband Tony in trying to peddle her wares to the Sri Lanka government, though dear Tony has not been far behind though more circumspect. He said at the tail end of his Lakshman Kadirgamar Memorial Lecture on peace and reconciliation that he was excited and hopeful about the future of Sri Lanka and “can’t wait to come back.” For another holiday or with a sheaf of proposals on how Tony Blair Associates or one of his numerous business ventures could help boost our tourism or bring reconciliation. 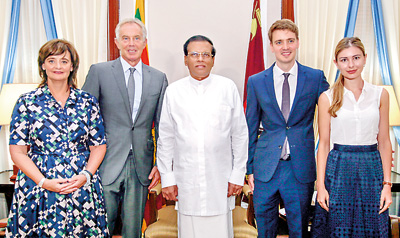 If his contribution to peace in the Middle East or the development of the Palestinian economy which was his mandate as the Middle East peace envoy of the ‘Quartet’ is any indication of his success in the last seven years (as peace envoy not as money-maker par excellence) then Sri Lanka can well do without a little bit of help from these new-found friends. Where were they, when we needed some Blair support?

The Colombo audience perhaps did not know that as Blair was virtually patting himself on his back for his achievement in Northern Ireland in making the Good Friday Agreement work, the power-sharing executive was not only on the verge of collapse but even the diplomatic arrangements that held the agreement together were under threat.

Violence in Northern Ireland continues and last month’s murder of an alleged ex-IRA assassin is proof enough, with the chief constable there also stirring the pot. While dear Tony would love to come back Mon Cherie will doubtless be even more eager and “delighted to help, particularly a country like Sri Lanka.” Not to make too fine about language since there are far more important matters involved, would it not have been more sophisticated linguistically, not to mention correct, to say a country such as Sri Lanka rather than a country like Sri Lanka because it is difficult to think of another country like ours, what with the poisonous miasma that has made life there difficult for decades.

So with Blair’s (Tony that is not Cherie) Northern Ireland venture in some disarray with the IRA still operating 17 years after the Good Friday Agreement, the Middle East to which he turned his attention as peace envoy after leaving office glad to see his back except for Israel perhaps, he wants to return to Sri Lanka.

After all did not the last government spend millions of dollars secretly extracted from the tax-payers to pay several lobbying firms in the US apparently to clean up our image as this newspaper exposed months ago. After that financially disastrous non-starter, the Blair duo probably saw easy pickings in Sri Lanka what with a westward-looking and rather obsequious foreign policy makers now installed in Colombo.

Mr. Blair must have learned a few things during his years in the Middle East even though he produced negligible results as a peace maker but made considerable headway as a money-maker and contact man for the international glitterati and less reputable types.

One lesson would surely be about the camel and the tent. As nomadic Arabs learnt if you let the camel poke his head into your tent before long he will get his whole body into it.  So before the Blairs emulate the camel it is best to say thanks but no thanks for their offer of help which would no doubt come with some financial accoutrement.

The double pitch of the Blair pair -one obviously so, the other more convoluted- raises some questions. If the Blairs came on tourist visas then there are restrictions on what any visitor on such a visa is permitted to do. They are not permitted to engage in any activity other than tourism.

But let that pass. Much more noteworthy is why the Foreign Ministry would only say that the Blairs were on a private holiday and were evading the fact that Tony Blair was to deliver the Kadirgamar lecture. Why was it kept under wraps? Is it because it did not want to disclose the fact too early fearing a political fallout if it was known that one of the principal aggressors who invaded Iraq causing the deaths of a million or more people and continuing havoc in that nation by radicalizing young Muslims across the globe and brought terrorism to the UK itself, is to give the memorial lecture.

Was this newspaper able to provide enough space one could relate report after report from the UK media that not only calls Tony Blair a war monger who should be dragged to the Hague for the crime of aggression but also to Cherie Blair’s deals with authoritarian regimes accused of human rights violations.

The latest of such consultancies to have attracted international attention and an outcry in the Maldives is the one Cherie Blair’s legal consultancy Omnia Strategy signed with President Abdulla Yameen’s government on “democracy consolidation”.
The irony is how to consolidate democracy when there isn’t any, where dissent has been suppressed, and the former elected president was forced to resign at gunpoint.

“Ms. Blair and her husband Tony, have been repeatedly criticised for signing lucrative business deals with autocratic governments. Omnia’s other clients have included Kazakhstan and Gambia,” said The Independent newspaper reporting the June deal.

Wish we had space for more tales from the Blair lair.