Kumaratunga’s Chief of Staff Justin Navaratne said today that Kumaratunga will function as the SLFP organizer for Attangalle with immediate effect.  The post of Attanagalle SLFP Chief Organiser had remained vacant during the recent past. Arjuna Ranatunge who was appointed as the SLFP organizer of Attanagalle vacated the post after a brief stint to contest the last parliamentary polls under the UNP ticket. 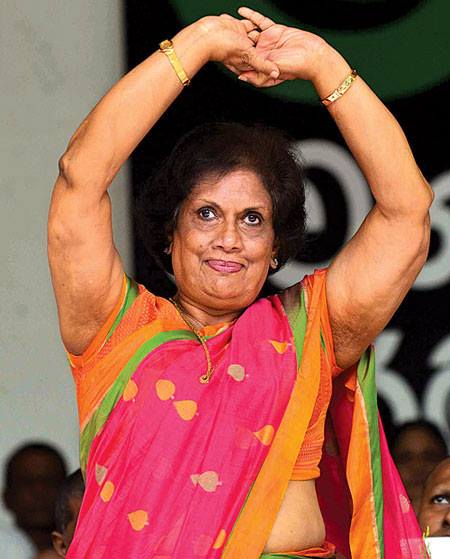 Kumaratunga however has been playing a very active role in politics in the recent past and is considered as the main protagonist in convincing Sirisena to contest the last Presidential polls.

Quite alive to the threat posed by CBK Rajapaksa who was President at the time had went on to say that it was not Ranil or Sirisena who posed a threat to his throne but CBK.

According to reliable sources within the SLFP, President Maithripala Sirisena and CBK will jointly conduct the party’s campaign at the forthcoming provincial council polls, slated to happen at the end of the year or early next year.

A SLFP MP said that some reports appearing in the media that Sirisena and former President Rajapaksa will lead the SLFP campaign was false. The SLFP MP said that the Sirisena – CBK combine was another attempt to keep Rajapaksa out of SLFP politics.

Already the new SLFP General Secretary Duminda Dissanayake has said that the SLFP will contest alone under the “Hand” symbol while leaving the coalition UPFA.

In this backdrop other UPFA leaders such as Wimal Weerawansa, Dinesh Gunewardena, Vasudeva Nanayakkara and Udaya Gammanpila are planning to create a separate political entity. They are to be supported by group of SLFP MP’s who are loyal to Rajapaksa.

However, what stance Rajapaksa will take on this new political development is not yet clear. The SLFP MP said that Rajapaksa has not yet given a definitive answer to a request made by his loyalists to lead the new coalition.

Both Sirisena and CBK have been accused of dividing and weakening the SLFP. However, according to the SLFP the duo this time will make a significant effort to build a strong SLFP and mount a significant challenge against the UNP.