Sri Lanka: What are You Babbling, Mr. Marapana?

Like other subjects, maritime affairs are the country’s assets, not the boggy man trick to plunder the national economy. The Avant Garde case must be investigated in detail, at the least from the date that the United Nations security council came up with very  sensitive statement against Sri Lanka on the based on slanders of… 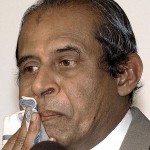