A planned hartal in the Batticaloa town organized by the Tami National Alliance in protest for not releasing Tamil political prisoners in jail still, has forced President Maithripala Sirisena to cancel his scheduled visit to the East Coast city today. A source close to the Presidential Security Division told Colombo Telegraph that the State Intelligence officials had advised President Sirisena against making his scheduled trip to open the new cancer ward in the Teaching Hospital, ceremonially open the re-furbished court house and his visit to a Buddhist temple. 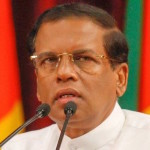 It is reported that state intelligence officials had been scouting the East Coast for the past week to gather information pertaining to the safety and security of the President’s visit.

Over 250 law enforcement officers who were also brought in from Colombo to provide additional security for President Sirisena had left back for Colombo last evening.

The entire city of Batticaloa is expected to be a ghost town today with public and private sector companies, banks and schools all receiving instructions from the TNA to put up shop.

The Sirisena – Wickremesinghe led yahapalanaya government’s toying with the release of Tamil political prisoners is said to be the reason for this planned hartal.