President Maithripala Sirisena has said that with judges of the calibre of one of the world’s most eminent jurists, C.G. Weeramantry, among us, he saw no reason for Sri Lanka to import judges — an apparent reference to the United Nations Human Rights Council resolution in Geneva. 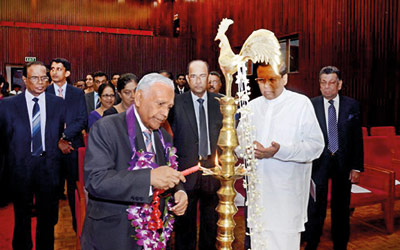 Making the keynote speech at a BMICH felicitation ceremony to mark the 50th anniversary of the appointment of Justice Weeramantry as a judge, the President said an independent judicial service was one of the time tested pillars of democracy.

Speaking in the presence of Chief Justice K. Sripavan, the president of the Court of Appeal and other judges, the president said he had since coming to office in January not interfered with the independence of the judiciary and there would be no interference as long as he was the President.

The President said that in future the appointment of President’s Counsel would be on the basis of seniority and merit and not influenced by any political connection or affiliation.

He requested the Bar Association of Sri Lanka (BASL), the organisers of this ceremony, to appoint a committee to recommend lawyers for appointment as President’s Counsel.

Justice Weeramantry making the concluding speech said that during his time as a judge from 1965-1972, Sri Lanka’s judicial service and especially the Supreme Court were widely regarded as the best and most independent in the Commonwealth.

He said he hoped its image and status were being restored and consolidated soon. Justice Weeramantry said that enlightened values of major religions — Buddhism, Christianity, Hinduism and Islam — could serve as powerful guidelines for the judicial service to become a selfless and sacrificial vocation on the lines of the priesthood.

During the past few weeks, the Sunday Times has published Justice Weeramantry’s comprehensive articles on the influence that religious values could have on reviving the independence and people-friendly spirit of the judicial service.

Copies of the Sunday Times articles were printed by the BASL and distributed to judges, lawyers, and others at Tuesday’swell attended ceremony.

Justice Weeramantry who began his law practice in 1948 was appointed as a judge or the Commissioner of Assize in 1965. Two years later at the age of 41, he was appointed as the youngest-ever judge of the Supreme Court.

He could have gone on for about 25 years – but in 1972 he decided to retire and take up a high academic post in the prestigious Monash University in Australia.

Later he became the first Sri Lankan to be appointed to the International Court of Justice (ICJ) in the Hague. He rose to be the senior vice president of the ICJ till his retirement in 2001.

During his seventy-year career in the legal profession, judicial service and the academic field, Justice Weeramantry had the rare distinction of having written about 25 books.

Chief Justice Sripavan in his speech quoted from the “Tirukkural”, part of Hinduism’s holy scriptures written by Thiruvalluvar, to show how the judicial services could be inspired by the guidelines of religious values.