The formation of the ‘Council of Tamils’ a new non-political group consisting of civilians of eminence, religious dignitaries, and members of some political parties did not shock many but caused some ripples among the Tamil leaders.

The council is spear headed by NP’s chief minister C.V. Wigneswaran with whom TNA’s leadership is at loggerheads on several issues like genocide, international investigation, relationship with present dilly dallying government, etc.

The council appears to be generating wide support among Tamils including diaspora and even from some TNA members of parliament. Wigneswaran’s handling of politics as a judge expressing views forthrightly and frankly surely is an irritant to professional politicians in TNA who are now adopting a humble and pleasing approach to the inactive Maithiri-Ranil government which is performing no better than the previous government’s in relation to problems of Tamils and promises made earlier. 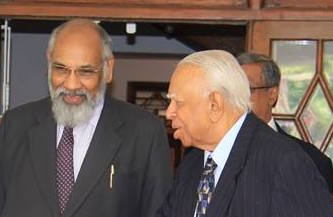 Wigneswaran plunged into politics as a request of Sampanthan and other well-wishers. R. Sampanthan was keen to rope in Wigneswaran to strengthen the TNA with a person of high calibre and repute. Vigneswaran becoming an ardent activist found, the opening and has now also become a strong voice for the Tamils, Solely for his unwavering stand and honest politics.

Wigneswaran and Sampanthan are now on different routes, and Sampanthan could not succeed in his meeting with Wigneswaran asking him to fall in line with TNA. Besides Sumanthiran, a confidante of Sampanthan openly passed strictures on Wigneswaran without TNA’s backing, which further aggravated the situation all of which exposed the disunity of TNA.

The fallout and the formation of the ‘council of Tamils’ became inevitable and many reasons can be attributed to this bold step.

The council has to advance its activities with the backings of TNA and not with any confrontation. Sampanthan has given his blessings for this council provided it does not target TNA or engineer any split.

The council is also well advised to keep and maintain a respectable image with members with clean hands and repute. Opportunistic politicians should not be allowed to tarnish and spoil the birth and prevent a rapid growth.

The council though it is said to be non-political, question is it will have to make it political to face and deal with parliamentary politicians. However, the council and TNA should have to work shoulder to shoulder without rubbing or trying to out beat or outscore each other for the sake of personal prestige or party interest.