[TamilNet, Monday, 11 January 2016, 23:05 GMT]
Northern Provincial Councillor M.K. Shivajilingam on Monday urged the public to attend a protest in Jaffna on Wednesday expressing their opposition to the deceptive politics being staged by the Colombo regime, particularly its leaders Maithiripala Sirisena and Ranil Wickramasinghe, who are scheduled to visit Jaffna in just another PR stunt on Friday, when Tamils across the globe mark the secular festival of Thaip-Pongkal. Mr Shivajingam said there has been no progress at all on five important fronts: release of 200 political prisoners, establishing the whereabouts of 20,000 missing persons, de-militarisation and releasing lands seized by the occupying military in the North and East, internationally mediated negotiations to resolve the national question and investigations on crimes against international law including the genocide.

Releasing a single political prisoner while 200 Tamil prisoners were struggling for their release and releasing a few acres of lands at Valikaamam while seizing more lands for military cantonments elsewhere in the North and East are only propaganda stunts for the consumption of foreign media and the international community, the NPC Councillor said. 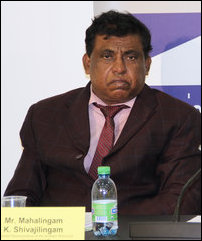 Mr Shivajilngam is a political leader of the Tamil Eelam Liberation Organisation (TELO) which is a constituent party of the Tamil National Alliance (TNA). The hierarchy of the TNA is collaboration with the regime in Colombo according to the whims and fancies of the external powers that are seeking geo-political strategic foothold in the island, according to the critics of the TNA hierarchy comprising ‘Opposition Leader’ R. Sampanthan and ‘elected’ parliamentarian M. Sumanthiran.

“Colombo is seizing lands at several locations to expand the Sinhala military cantonments. Why do you need such military installations? Do you want to fight with a foreign country or do you want to serve as a slave military for a foreign State?” Mr Shivajilingam questioned.

20,000 people are reported missing in the past. Of these, 8,000 people are reported after they were taken away inside the SL military controlled Vadduvaakal at the final hours of the genocidal onslaught on Vanni in May 2009, the NPC councillor said. “They were taken away with their families, with children and family members who were non-combatants. One year has vanished after the regime change in Colombo. Nothing has been revealed,” he told media in Jaffna.

Calling the scheduled visit of the duo on Friday as a mere deception, the NPC councillor reminded the Tamils that they had already seen far-advanced versions of deceptions such as the so-called ‘peace dove’ Mrs Chandrika Kumaratunga in 1994.

Mr Shivajilingam was a driving force behind the process of NPC passing a landmark resolution demanding international investigations on genocide against Eezham Tamils.