Vaithilingam Lingarajan spent the war years plying the seas off the northern coast of Sri Lanka in his small fishing boat. It was only once the conflict ended that he decided to flee the country, making a failed bid for Australia that has left him destitute and facing possible criminal charges.

Lingarajan is one of more than 1,400 asylum seekers who have returned since 2009 because Australia rejected their applications, according to the Sri Lanka’s Criminal Investigation Department. Another 4,310 Sri Lankans who did not apply for refugee status were sent back when the Australian or Sri Lankan navy intercepted their boats before reaching Australian waters.

Many returnees face crippling debt after spending large sums to pay for the journey, and they can be fined 100,000 rupees ($700) for attempting to emigrate illegally. Some left Sri Lanka for economic reasons, while others, like Lingarajan, planned to claim asylum in the dangerous aftermath of the civil war.

Ethnic tensions exploded in Sri Lanka in the early 1980s when the Tamil Tigers began fighting for an independent homeland for the Tamil minority, which had suffered discrimination under the Sinhalese majority. The conflict finally ended in May 2009 after the Tigers were routed from their last stronghold in Mullaittivu, where Lingarajan lives.

He had managed to escape being pulled into a conflict that even spilled into ocean, where the Sea Tigers, the rebels’ marine division, staged audacious attacks on government naval vessels. But after the war, security agents began searching Tamil communities for anyone with connections to the defeated rebel group. Some people were simply questioned, while others disappeared.

One visit from security officers in 2013 was enough to persuade Lingarajan to make a life-changing decision to take a boat to Australia. As a fisherman, he said he wasn’t afraid of the perilous ocean journey. The worst part came later, after the Australian coastguard intercepted the boat and sent the passengers to a processing centre on Manus Island in Papua New Guinea where he was locked up with hundreds of others.

“It was terrible,” Lingarajan said. “There were people who could not think of anything other than being returned home. They were so scared, they had nightmares.”

Lingarajan came back to Sri Lanka late last year and has begun fishing again, but this time as a labourer on someone else’s vessel. He sold his own boat to pay for the trip, as well as his nets and his wife’s jewellery. He gambled on being able to work in Australia and build a better life for his wife and four children. Instead, he owes the 500,000 rupees ($3,500) that he borrowed to make the trip. 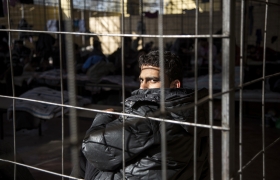 Is migration the elephant in the room?

Australia is keen to convince others that they will meet a similar fate if they try to make the same journey. In December 2013, Australia launched Operation Sovereign Borders, intended to ensure that no one arriving in Australia by boat without a visa would be allowed to settle in the country.

In Sri Lanka and other countries, newspaper advertisements and large billboards started appearing, containing messages in local languages such as: “You will not even get a chance to step on to Australia… Think twice before you waste your money. Don’t get fooled by people smugglers.”

Australia also began providing assistance to Sri Lanka’s security forces, including the gift of two patrol boats in July 2014. Australia’s Minister for Immigration and Border Protection Scott Morrison “commended what he described as ‘very close cooperation’ between Australian authorities and Sri Lanka’s police and navy towards preventing illegal boats carrying asylum seekers,” according to a Sri Lankan government statement at the time.

Of the 53,000 “illegal maritime arrivals” between 2009 and 2013, more than 10,000 said they were Sri Lankan citizens, according to information provided to IRIN by Australia’s Department of Immigration and Border Protection via the Australian High Commission in Sri Lanka.

“Since OSB began in 2013, every Sri Lankan boat that has attempted to come to Australia illegally has failed,” said the department, which requested that IRIN quote an unnamed “spokesperson”, but provided no rationale for anonymity.

In addition to trying to convince Sri Lankans to stay at home and sending them back if they reach Australia, the country has directed more than 100 million Australian dollars ($71 million) since 2009 for reconstruction in areas affected by the civil war, the department said.

The relatively small amount of aid provides little comfort to Lingarajan, who is now trying to eke out a living in Mullaittivu, where the government waged a final assault on the Tamil Tigers back in 2009.

“My main concern is paying off my debt. Every cent goes into that,” he said. “It is afterwards that I can think of anything else.”