Disappearance of Prageeth Eknaligoda on 24th January 2010 has captured the attention of the media and the international Human Rights Organizations to such a scale due to the determined effort of Prageeth’s wife Mrs. Sandya Ekneligoda. For the past six years, she has with relentless determination and in the face of unimaginable pressures, pursued justice over her husband’s disappearance.

The now ousted semi-Gestapo regime of Mahinda Rajapaksa in a dastardly manner silenced questions, but could not dissuade Sandya Ekneligoda from pursuing her mission for justice.

Despite facing a stream of abuse, insults, intimidation, threats etc., etc., she continued her campaign fearlessly. She battled her way through with sheer determination that even reached the corridors of the United Nations. Armed with steely willpower, she campaigned and used the much discredited legal system operating under Mahinda Rajapaksa to file a Habeas Corpus application to unearth the truth about her husband’s disappearance. 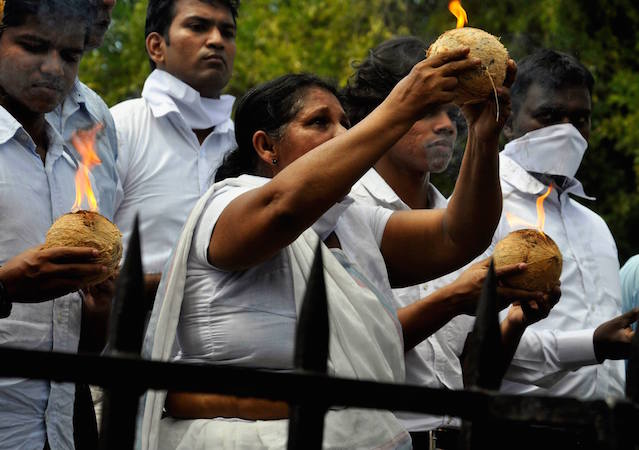 Even the bloody murder of the Sunday Leader editor Lasantha Wickrematunge allegedly killed by the state intelligence operatives did not receive as much interactive engagement from the immediate family members. Conditions were created by the State for all those associated with Lasantha to leave the country or their voices were silenced with death threats, intimidation and fraudulent legal maneuverings. Under the present government, Lasantha’s case too is receiving considerable attention like seeking the truth about the disappearance of Prageeth Ekneligoda.

If Sandya Ekneligoda had succumbed to the menacing pressures of the Machiavellian Rajapaksa regime, her husband’s likely murder would have remained unknown and with time forgotten like many hundreds of thousands of unaccounted disappearances and killings in Sri Lanka.

The change of government permitted Sandya Ekneligoda to pursue her campaign further. According to latest news, the probe has reached the final stage with several soldiers and officers being arrested. If not for Sandya Ekneligoda, the investigation would not have reached this far.

The worst of her experience was when she was confronted by the insolent monk of the extreme right wingBodu Bala Sena (BBS) Galagoda Atte Gnanasara at the Homagama Magistrate’s court two days after the 6th anniversary of the disappearance of her husband. BBS and Gnanasara Thero are the tools deployed by the Rajapaksa regime to whip up communal hate as a political tool. They tried to test their limits with the new government that has given the freedom to the judiciary to dispense justice in accordance with the law. The judiciary too responded in kind to assert its judicial authority.

Even the cold blooded murder of the Tamil Congress leader Kumar Ponnambalam in January 2000, who was carrying out a vituperative campaign in the media during Mrs. Chandrika Kumaratunga’s presidency, did not get the much needed pressure from his family that has made a name in the legal field . Their legal standing from grandfather to the grandson, along with their immense financial resources was stalemated. The initial outright effort of the family came to naught because of gossip about Kumar Ponnambalam’s extracurricular activities. These were attributed to his killing at Ramakrishna Road, in Wellawatte. In fear of humiliation, no pressures were put on the government to investigate. Investigations and pursuance of judicial process were stalemated whilst the killers are still at large without paying the price they deserve for the killing Kumar Ponnambalam.

Gajan Ponnambalam groomed by his slain father to become a barrister, did not feel an inquiry on his father’s brutal death is worthy of pursuance. He compromised his feelings for his father and his legal training at the altar of social and political expediency. Whatever may be the reasons, justice should have been sought and made to prevail. Kumar Ponnambalam’s murder is a major blot on his family’s sense of justice and Sri Lanka’s commitment to law and order in days, hopefully relegated to the past. This case must be reopened too. I hope Gajan Ponnambalam will get this process rolling.

When I think of the current efforts in the UK to go after famous BBC’s Jim, former Prime Minister Ted and many other acclaimed personalities who are either dead or in the dying stage over allegations pedophilia or rape, I wonder when the day will come for Sri Lanka to seek justice for all those who were murdered or maimed in a cold blooded manner by agents of the government.

This is why I hold Mrs Sandya Ekneligoda in high regard for her relentless effort to seek justice – a woman who deserves the highest recognition for her inspirational standing to find the whereabouts of her husband and seek justice on behalf of all of us and for us.