Thiruwana stone (not gem) given as guarantee and loans taken by Rajapakses and henchmen – daylight robbery at Lanka Putra bank ! (video) 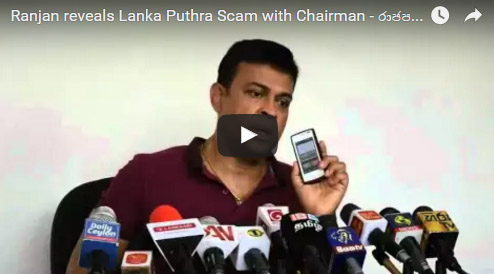 (Lanka-e-News- 23.Feb.2016, 9.00PM) How the state bank- Lankaputra bank  was allowed to be robbed without let or hindrance during the Mahinda Rajapakse corrupt brutal reign by his henchmen and lickspittles was revealed at a recent media briefing by minister Ranjan Ramanayake while having the chairman of Lanka putra bank as witness via the phone.

It was disclosed that during the corrupt and criminal reign , Rs. 5 billion was released as loans to political henchmen , and out of that sum , Rs. 2 billion could not be recovered. That is the borrowers have defaulted payment with impunity . It is impossible to recover the loans because spurious  guarantees have been  given. This information is most rudely shocking , it was pointed out.

Believe it or not , it is Gamini Senarath , the chief of staff of ex president Mahinda Rajapakse who had exerted pressure to grant these loans. The FCID is conducting investigations into these frauds and defaults. The video footage of Ranjan Ramanayake’s exposure is hereunder