President Maithripala Sirisena is to appoint a Presidential Commission to investigate the attacks on journalists and media organizations which were carried out during Mahinda Rajapaksa’s rule. 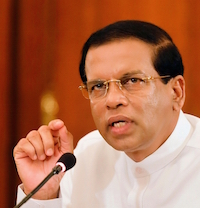 The Presidential Commission will be tasked with probing the attacks on several journalists including Poddala Jayantha, as well as the attacks on Sirasa TV and Lankaenews.

Meanwhile, speaking at the US Institute of Peace, Washington DC on Friday, Foreign Minister Mangala Samaraweera said that the investigation into the killing of Sunday Leader Editor Lasantha Wickrematunga was moving extremely well.

“But for obvious reasons, and until the suspects are rounded, the details are curtailed. But I assure you that the investigations of Lasantha Wickrematunga and Prageeth Ekneligoda are moving forward,” he added.

Samaraweera also went on to claim that there was ‘total and absolute’ freedom for the media to write as they wish in Sri Lanka since the change of government.

Incidentally, his statement about media freedom in the country comes just weeks after Prime Minister Ranil Wickremesinghe lashed out at a television channel and newspapers, where he said that if they don’t stop their nonsense he will take them on and also demanded a journalist to go home for writing an article asking him to give up his party leadership.

Incidentally, Field Marshal Sarath Fonseka, who is alleged to have been involved in several attacks against journalists was given a ministerial portfolio by the Sirisena-Wickremesinghe administration this week, raising questions about the independence and authenticity of such inquiries.