“A body of men holding themselves accountable to nobody ought not to be trusted by anybody.”  ~ Thomas Paine

The multiple misdeeds, alleged crimes ranging from abductions, assaults to even murder, acts of corruption and nepotism, providing wrong and deceitful information on the economy etc. belong, as already alleged, in the right domain – the Rajapaksa regime. These were all acts of commission. When one adds the acts of omission to this lot, the list rises nauseatingly high and the scope of investigation into them becomes excruciatingly tough. 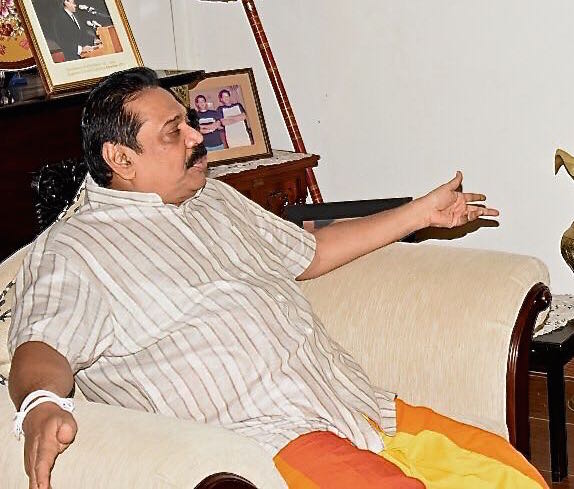 However, at the very outset, allow me to emphasize: ‘Finger on the trigger’ should not be assumed literally as one holding a gun against someone’s head. The writer uses the metaphor, not to sensationalize the various allegations that are being dangled against some prominent members of the ruling cabal of the last regime, but merely as a figure of speech. The real question that the writer is asking is: Who was really and wholly responsible and accountable? Where did the proverbial buck stop?

Yet again, it is, as I wrote in my earlier columns, redundant to keep beating the same drum as the Rajapaksa regime was defeated in the January-2105 Presidential Elections and that defeat has passed down to history. But keeping them as part of history and not allowing the average citizen to be intimidated, abused and violated by the same perpetrators is as important as protecting what was gained.

For quite some time, allegations have been flying and the average citizen every now and then made a very legitimate inquiry as to why nobody is getting punished for the alleged misdeeds; they expressed utter frustration at the snail’s pace at which the so-called investigations were being dragged on; wild rumors made their usual rounds in drawing rooms inside homes, crowded bars in Colombo clubs and even inside three-wheelers which the average citizen uses for his or her daily regular/irregular commuting. That frustration reached a peak and may have died a natural death as they always do, when a sense of resignation dawns and day-to-day workloads overtake indulgences in unnecessary yet interesting pastimes.

But there is no circumventing the fact that the members of the former First Family were deeply entrenched in almost all the alleged misdeeds; their names came up as the first culprits of corruption, not so much as smalltime dealers of the trade of wheeler-dealing, but as major players of some mega deals, sometimes involving foreign governments. The deals were alleged to have been consummated not to the benefit of the country or its citizenry; engineering estimates of infrastructure projects were way over the engineer’s estimates so that the contract price was artificially bloated and the extra millions were siphoned out to illegitimate stakeholders. Not once, nor twice but multiple times this exercise was repeated and there was no way in which one could even guesstimate what the actual costs were and what really went into the pockets of the powers that be.

While this massive swindling was going on, the so-called Cabinet of Ministers kept their eyes and ears closed and a policy of ‘don’t ask don’t tell’ was carried out to its absolute brim. Nobody had the guts to ask as to whose finger was on the trigger.

When journalists were dragged out of their homes, mercilessly assaulted and violated and sometimes even killed, those who were close to the ruling cabal kept their usually cantankerous demeanor out of the fray and gave every indication to the curious and legitimately agitated that it was not their business to query. The shame does fairly and squarely fall on them. They are as much stained as those who literally committed these heinous crimes. It was Martin Luther King Jr. who said that those who stand by without protesting against assaults on a people solely because of the color of their skin are committing no less a crime than who really commit the crime.

No person seems to know where Prageeth Ekneligoda’s mortal remains can be found. His wife is being passed from pillar to post; she may have trekked the entire length and breadth of this country and found no credible answer, not from the Police nor from the ruling cabal who are suspected of abducting him and ultimately killing him. The stories that were released, especially what was told to the press by the then Attorney General, for the consumption of a gullible public are laughable. A wife and children are left to the fancies of cynical political calculus.

All these misdeeds the previous regime has been alleged to have committed could be broadly categorized as follows:

Let us deal with them one by one.

The entire Family, barring none, is responsible and should be accountable for the commission of corrupt practices and making bribes and ‘santosams’ a necessary tool in the business of getting anything done in the government sector. The inquires initiated by the Financial Crimes Investigation Division (FCID) have been focused mainly on the previous ruling Family- former President and First Lady, children, brothers, except perhaps the former Speaker. When corruption is traced to the top of the hierarchical ladder, when the process starts and flows downwards, it is natural that the top has to look the other way. Can these allegations regarding these same unholy practices adopted with vigor by those who occupy the lower ranks go unnoticed? Once the top is rotten, that rot seeps down with nauseating speed and goes to the root. The rotten roots now seem to have defiled the very soil that initially gave birth to a not-so-corrupt tree. The finger belongs to the ruling cabal- the Family.

When the First Family is engaged in a vigorous campaign of enriching its own kith and kin, when it avails itself of the complete array of top jobs, lucrative contracts, attractive foreign travels, super-luxury vehicles and bungalows, and all the pomp and pageantry that follows such exclusive privileges, those who follow the leader are eventually enticed to repeat the same. They too are encouraged to fatten the fortunes of their respective families and their kith and kin. The finger on the trigger is exclusively owned by the First Family.

Abuse of the judiciary, effecting constitutional changes and abuse of parliamentary majority power

The blindly loyal officials, political appointees and those members of the Family who engaged in the practice of gross violations of human rights, when the former Chief Justice was publicly ridiculed, when the hero of the war-victory, Filed marshal Sarath Fonseka was unlawfully detained and later found guilty by a court martial, such inhumane acts cannot go unpunished. When the 18th Amendment to our constitution saw easy passage in Parliament, in order to add six more years of uncultured indulgence in avarice, lust and greed, one cannot condone such extravagances. Assault on the country’s decency and conscience was obvious and any dissent was brutally curbed. When the people in Rathupaswela took to the streets asking for clean water, the answer was teargas, water cannons and bullets. In Katunayake, another protestor was killed by a bullet delivered from the guns of the security forces. But no arm of the governing mechanism could reach the perpetrators.

This time the finger on the trigger belonged to the one/ones of the Family who gave the order and those insensitive security forces and henchmen who carried out those orders.

On this of course, given the cruelty of the acts and legal nuances involved, I will hold my thoughts. The jury is still out on those who have been alleged to have given orders to carry out all murders, abductions and violations. I am positive that our legal system would ultimately find those who committed these dreadful and shocking acts of murder, abduction and rape.

What gave these political hooligans right and space to commit all these misdeeds? What motivated them and who protected them? These questions will remain unanswered for a while but the present Government simply cannot play politics with this dynamic of social disease. Whatever the gravity of the ailment, however deep it runs in our social fabric, unless and until we tell ourselves enough is enough, we would have wasted our effort to bring in a new government, new President and a new Prime Minister.

One can quite legitimately argue that the whole country watched and allowed this diatribe to go on. Those who silently stayed without being even a voice in the wilderness too had to bear this unholy cross. But thanks to Maithripala Sirisena, the current President who told himself and the country that enough is enough, we are breathing fresh air today. Richard Bach, the brilliant writer who gave us ‘Jonathan Livingston Seagull’ also told us thus: “The mark of your ignorance is the depth of your belief in injustice and tragedy. What the caterpillar calls the end of the world, the Master calls the butterfly”.

It is becoming increasing incumbent upon the present rulers to accelerate the process of exposing those who were responsible for an untold number of national felonies. These narcissists must be exposed to the full and then, and only then the people would be satisfied that they in fact did achieve something tangible on the 8th January 2015.