Sri Lanka is in the middle of a raging controversy at the UN over the world body’s suspension of the media credentials of a US journalist, He has been advocating the rights of the Tamils in his daily blog. V. Rudrakumar, described as the prime minister of the transnational government of Tamil Eelam, has signed a letter, along with six Tamil expatriate organisations asking the UN to restore Lee’s credentials.

Following an incident where he tried to record a closed-door meeting of the UN Correspondents’ Association, Lee’s credentials as a resident correspondent were withdrawn and he was told to vacate his office in the UN building. But he has been issued a restricted non-resident media pass.

The letter, which is also signed by the US Tamil Political Action Council, the Ilankai Tamil Sangam USA, the Tamil Forum, New Jersey, the National Council of Canadian Tamils, People for Equality and Relief in Lanka and the World Thamil Organisation, has asked the UN to reconsider the decision to revoke Lee’s credentials.

“The coming months will be crucial for Sri Lanka at the UN as the government of Sri Lanka must take steps to implement the UNHRC resolution HRC/30/1 for truth, reconciliation and transitional justice. We are concerned that ICP’s inability to report on UN’s support for this process will be significantly limited with a temporary non-resident pass granted to Mr. Lee,” the letter says.
The letter also describes ICP as a “key source of information for the victims in Sri Lanka in understanding how their affairs figure at the United Nations.” The letter has been addressed to the Under-Secretary-General for Public Information Cristina Gallach, with a copy to Secretary-General Ban Ki-moon. 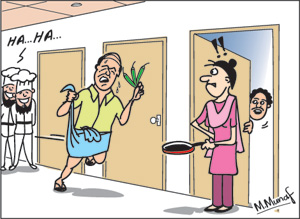 Diplomatic bulls with a cooking goose
Weeks ahead of the August parliamentary elections, there was a hue and cry about the workings of the Ministry of Foreign Affairs under the previous administration.  So much so, leaders of the ruling United National Front Government made solemn pledges to create a professional service and post qualified persons on overseas assignments. We were solemnly told that appointments, both local and foreign, would be based on a “scientific basis”. Alas, they have made an art of that science alright. Here is a story of the yawning gap between saying something and doing it.

The UNF Government nominated an envoy to serve in a troubled Asian country. He is an Eastern province businessman who set up his trade in Polonnaruwa in the North Central Province. The man wanted to take his brother-in-law also to the country before he left on his posting. He encountered some difficulty. So he did what even the host country tribesmen would not do. He appointed his brother-in-law (the wife’s brother) as his cook. Not that the man knew the culinary art. He was as ignorant in making rice and curry as he was in preparing Qabli Pulao or Kebabs.

The envoy made his “cook” the first one, perhaps in the world, to be received formally by the leader of that country. It happened when the envoy named him as one of those who will be in his entourage when he presents his credentials. Naturally, the leader shook his hands.

In view of the troubled conditions, most diplomatic missions that cannot afford private security companies have their offices in a hotel complex. Sri Lankans say that our envoy was seen clad in his sarong and slippers on the ground floor of the hotel casting away diplomatic niceties.

As a junior officer said, the envoy’s wife cooked meals in the hotel room whilst the official “cook” looked on, probably ‘supervised’ or maybe he was the official food taster for the ambassador. An embarrassing moment arose when the envoy came in his sarong and slippers to the hotel kitchen and asked for three green chillies. They gave them free to him.
Talk of dip-lunacy.

Multimillion-rupee Whitewash caught on camera
Did a doctor promoting miracle cures during the previous administration broker a multimillion rupee deal to install surveillance cameras in important installations?The Presidential Commission of Inquiry into acts of fraud, corruption and abuse of power, state resources and privilege has sent this case for a probe by the Commission to Investigate Allegations of Bribery or Corruption (CIABOC).

The Presidential Commission has told the CIABOC that an anonymous petition, on the face of it, merits an investigation by it. This is because the mandate of the Commission does not extend to the period when the CCTV (Closed Circuit Television) equipment was purchased. Whilst the Commission’s mandate is to probe matters after 2010, the surveillance equipment had been bought in 2009.

The petition claims that a staggering Rs. 2,125 million has been spent on installing the equipment at Janadipathi Mandiraya, Temple Trees and the Bandaranaike Memorial International Conference Hall (BMICH).

The anonymous petition alleges that besides the doctor, a senior Police official, a state officer and a person described as a ‘third party’ have received kickbacks.

Grassroots diplomacy does not produce result
Colombo based high commissioners, ambassadors, top diplomats and their deputies were on a joint tour.
Arranged by the Presidential Secretariat in conjunction with the Ministry of Foreign Affairs, destination one was the Polonnaruwa District. Here they were on a conducted tour of the President’s own district.

Destination two was a visit to the Jaffna peninsula. Among the places of interest they visited were refugee camps and project sites. Obviously the two joint organisers were unaware of what was to come.

The envoys ended up with a load of requests. That included assistance to repair water tanks, build extensions and even funds.
Government leaders were naturally embarrassed. If the visit to the peninsula was to showcase a success story, the message was different. An irate official remarked that in the past, the troops who were deployed in the area attended to minor repairs and restoration work. With the troops being confined to barracks now, there was no one to attend to this work.

World Cup victory show: Big wigs run out
Sri Lankans love to live in the past, and yesterday some of our famous cricketers went back in time to the glory days of when they won the 50 over World Cup; it was to celebrate the 20th anniversary of that victory.

Never mind the fact that the National team is struggling right now as the under-dogs at the ongoing T20 World Cup. The Colombo Cricket Club was honoured by the presence of the President, no less, for the 20th anniversary yesterday. The Prime Minister was also invited, but he excused himself because of some official engagment in Ampara. Of course, the captain of the 1996 side, now Minister Arjuna Ranatunga, was the Man of the Match.

Alas, neither the Sports Minister nor the newly elected Cricket Board president were even invited. Now surely, that’s not cricket.
Invited or not, the Minister however turned up; showed his face and left in a jiffy. What pandu they play in the politics of cricket?

Frantic search for  Ravi in Delhi
Weeks earlier, Finance Minister Ravi Karunanayake attended an International Monetary Fund (IMF) sponsored event in New Delhi.
He took the opportunity to make a courtesy call on Indian President Pranab Mukherjee.
When he returned to Colombo and his staff distributed photographs of the meeting, questions began to circulate over a third person present. In the photograph, a youth in denim trousers and tee-shirt was seated next to Mr Karunanayake. Speculation centred on the possibility of the person being a Sri Lankan.

However, it has now come to light that the youth was none other than Indrajit Mukherjee, the second son of the Indian President who is employed in the corporate sector in New Delhi. Meanwhile, the Indian Finance Ministry had been on a frantic search for the Sri Lankan Minister who had sought a bi-lateral tete-a-tete with his Indian counterpart after the IMF meeting. His contact points were unknown. No one knows if the two ministers met eventually, and there was no photograph issued to testify to the meeting. Unless, of course, it was behind closed doors.