[TamilNet, Sunday, 03 April 2016, 23:37 GMT]
In addition thousands of acres of agricultural lands that have been seized from Eezham Tamils by the Sinhalese in Kuchchave’li DS division in Trincomalee, the occupying military of genocidal SL State continues to keep around 500 acres of private and public lands. The SL military is refusing to release these lands, even for the purpose of a housing scheme for government employees, Tamil civil sources in Trincomalee told TamilNet. Pul-moaddai (meaning grassy pond), situated at a sandbar on the side of the Eastern Province of the North-East border, is not only a must location from the genocidal point of view, but is also a place of significant economic importance because of the ilmanite deposits found there beneath the white sand dunes.

The SL State is carrying out demographic genocide at the strategic locations in the country of Eezham Tamils with the backing of New Deli and Washington that groom the Sinhala military.

Just a few days ago, on 29 March, the US Navy and the Navy of genocidal Sri Lanka staged an official ‘one-to-one’ direct discussions as part of the ‘Pacific Partnership’. The SL Navy was highlighting it as ‘first-ever instance’ in Sinhala language to the public.

During the genocidal war, the military of the New Delhi Establishment had a station at Pul-moaddai ostensibly for the purpose of medical assistance, but actually to coordinate ‘monitoring’.

Despite repeated calls from the Eastern Provincial Council, the Colombo government, which claims ‘good governance’ is not prepared to instruct its occupying military to release the seized lands, the civil official said.

Similarly, more than 100 acres of lands remain seized at 14th Mile Post and at Arisi-malai, the civil sources further said.

The notorious Special Task Force (STF) is also refusing to vacate from 20 acres of lands at Thoa’naa-mu’rippu.

The SL military alone is using at least 500 acres of lands in the division, the civil officials said adding that they were unable to locate public lands for civil governance purposes in Pulmoaddaai. 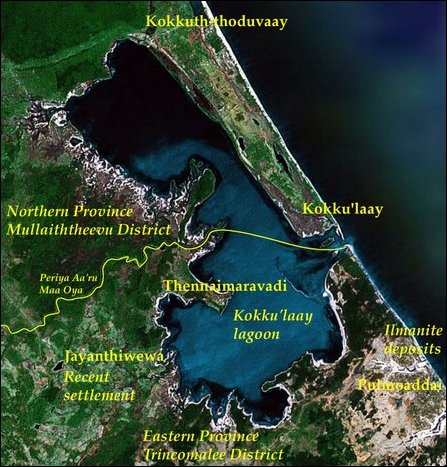