Dheepan has both collected the Palm d’Or at Cannes and caused controversy among Tamils. This is particularly so among Tamil writers given that the leading actor is a well-known writer in Tamil. From the point of view of the Tamil literary circle, there are many truths that need to be told about this movie. With that aim and perspective this review is written to shed light on few points – so look away now if you expect an ‘objective view’.

In a way the real story is about an opportunist but clever director and one extraordinary artist. Shoba Sakthi (Antonythasan Jesuthasan) plays the leading role as an ex-LTTE militant who continues to the fight to ‘protect’ – this time an adopted family. But in real life Shoba is no ordinary artist. His short stories have defined modern Tamil literature and he is one of the most highly praised short story writers of our time. Even those like us, who oppose some of Shoba’s political views, have enormous respect for his artistic talent. But Dheepan is the sort of a story, I am sure Shoba himself would consider, average.

From the off, the film is packed with mistakes. There are mistakes of both fact and storyline. The story of the main character appears to be set in 1989, and then merges into the events of 2009 without any characters aging. The ambiguity found in the directors’ style may help to hide these facts from some audiences. However, it also fails miserably in terms of the casting of other actors – the translator, the female lead, etc. 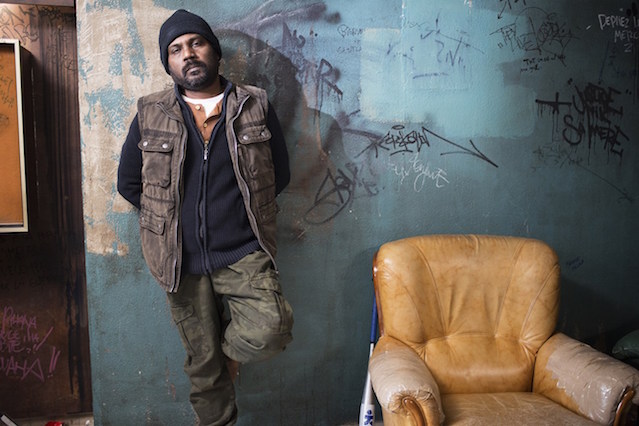 Of course, it is not just a story of a Tamil family, but an attempt to depict the ‘universal’ life of an immigrant fleeing war and what they face in France. And it’s also a love story. Violence in the immigrant community in the Paris suburbs is inherently connected to state oppression, racism, lack of services, joblessness, etc, etc – none of which features in Dheepan. Almost every aspect of the state and the ‘native French’ characters are portrayed ‘naively’. Not that the French people are anti-immigrant, but the uncritical portrayal in the film successfully hides key factors that contribute to the alienation experienced by immigrants.

This is a simple story that aims to express and assuage the middle class guilt about the current mistreatment of immigrants. It seeks to entertain with the satisfaction of a ‘heroic’ immigrant who shows super-human ability and continues to defend what he ‘loves’. Apart from the killings, all the characters are on their ‘best behaviour’. Ending with the main, troubled character driving a taxi in London – which doesn’t fit in with the ‘quality scripting’ in whatever way you look at it. It could be Jacques Audiard’s dream – but no Tamils or any immigrants will generally dream of or realise becoming a London cabbie. It takes years to master the ‘knowledge’ of all the routes. That is if they have managed to save enough money to go through the training and buy a taxi. Audiard’s embarrassment could have been avoided if the character had driven a minicab – one of the typical immigrant jobs. It shows the story teller’s lack of connection with and feel for his subject.

The director, however, cannot escape by blaming it on the viewer’s sophistication – translation problems, bad pronunciation, etc. Audiard cannot be forgiven because he is being ‘nice’ to the plight of the subaltern in comparison to that of his contemporaries. This is a sort of ‘lesser evil’ approach in art. And there is another fact that puts Audiard to shame. The artist he worked with – Shoba – is very capable of spotting these mistakes and could have helped to elevate the story to a better level, if he had been listened to or consulted. None of the Shoba’s short stories contain this level of inaccuracies and depthlessness.

The reason that this movie stands out for the western audience is the contribution that Shoba brought to the screen in terms of the tiny details in parts of the screenplay that deliver an element of authenticity and understanding which are elsewhere conspicuous by their absence.

Winning Cannes, of course, adds to the shadowy politics that have existed for a long time – about of these sorts of awards. However if any merit to be given to the movie or most credit should go to Shoba. The award system lends itself to mythologizing the roles of actor and director, helping to sell the product.

The sad story we see on the screen is that of an extraordinary artist desperate to get a break, who is willing to dumb down his artistic ability for the sake of recognition, who tolerates and goes along with the glitterati treating him like just another man who ‘played his own stories’ and carries along with various lies and rumours about his ‘fighting days in the LTTE’ and so on.

It is this sad story that breaks our hearts. Shoba is paraded in the media as someone who was ‘quickly rushed through the acting training’. We are told that is the ‘genius’ of the direction that brought the story to life, etc. This capable artist who had no access to the art and film industry – or the funding – is now forced to live off the crumbs of fame that are left over from Audiard and Cannes. But for them it’s just a ‘character study’. But the truth is, this character is just emerging – we haven’t seen enough.