“There is no den in the wide world to hide a rogue. Commit a crime and the earth is made of glass. Commit a crime, and it seems as if a coat of snow fell on the ground, such as reveals in the woods the track of every partridge, and fox, and squirrel.” ~Ralph Waldo Emerson

They call themselves the Joint Opposition. They are a twice-defeated, once at the Presidential and then at the parliamentary elections, lot of parliamentarians and two or three-time Ministers, who ransacked the country’s economy and its invaluable assets of youth and school children. Instead of taking these avaricious political parasites one by one and decimating them to pieces, the writer would prefer to deposit them into one bunch and tear the fabric apart so that the thread that holds all of them would give way. 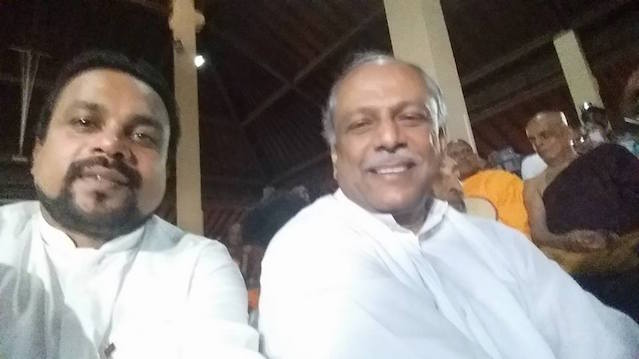 A majority of those who identify themselves as major players in this irreverent ‘tent’ are facing very grave charges of corruption, nepotism and political mayhem; they have been alleged to have abused their political power to enrich themselves and their kith and kin; some have even been alleged to have committed criminal deeds such as possessing multiple passports; names of a few have been mentioned in murder charges. Whatever may be proven in a court of law, they surly have desecrated every grain of soil they claim to worship. They are a stain on the nation’s past and present. Whatever they were capable of, they indeed have proven to be very able sinners.

Armed with a ‘self-righteousness’ shield, they opined that the defeat of the Liberation Tigers of Tamil Elam (LTTE) was absolutely owing to them and them alone. Hundreds of thousands of ordinary soldiers, corporals, lieutenants, captains, majors and colonels of the Army, and first responders and other fighting units of the Navy, Air Force and Police forces were completely ignored and forgotten. Even the then Army Commander, General Sarath Fonseka was discarded as non-consequential (his subsequent incarceration is another story altogether). That self-righteousness obsessed the first family and the resultant arrogance and vanity shielded them and played a pivotal role as armor to hide behind and resort to all sorts of illegitimate, undemocratic and illegal activities. Opposition to this wild behavior was brutally suppressed; whether one comes from the fourth estate or a rural village, dissent of any degree could not be tolerated by the members of the first family. While violating every precept of fair governance, they became immune to the slightest of criticism and public judgment.

When one takes oneself out of the realm of being judged by the people at large, the obvious signals are glaring and vivid. The armor of self-righteousness protects them, so they thought. An alarming sense of vanity, a reckless sense of indestructibility sets in. Impermanence of political power evades their mindset. In their own small psychological domain, they treat themselves as omnipotent. That sensation of omnipotence starts its destructible process until it gives way to a process by which the subject persons begin reacting instead of generating his or her own chain of events. Eventually they either succumb to the forces that confront them or choose to fight them, of course quite imprudently. Self-righteousness has eaten into the being of each individual of the First Family and the subject Family begins to believe their own lies and half-truths as the gospel.

But the First Family could not have done this on their own. They needed cohorts and henchmen; they needed fellow believers and blind loyalists and above all else, they needed collaborators. Those who stand behind the First Family today are those collaborators. They not only benefited from the wicked alliance they had with the Family in running the country’s affairs as if they owned the land and its people, they resorted to the same methods and means of socio-political ladder-climbing. The loot was shared and the muscle power was provided by the henchmen of these henchmen of the Family. A vicious circle of Family rule was established and the protection was provided by the cohabitants of the First Family. They were the cui bono for they stood to gain from the ever-fattening girth of the Family.

Against each and every member of those parliamentarians who identify themselves with the past regime that suffered an ignoble defeat in January 2015 Presidential Elections, there looms a charge of corruption, nepotism, loot, hooliganism or vandalism. They have a vested interest in the sustenance of the First Family’s rule. They benefitted from it, they looted with them, they violated human decency along with them and now they stand behind them, providing protection and refuge. Being grateful is indeed a noble trait, but being accountable for the commission of human indecencies and follies is nobler. Allegations against them are extremely egregious and most of them are awaiting the outcome of various investigations.

Bringing back the Rajapaksas is in their own interest. And it is imperative that they resort to this historical human virtue, that in order to cover up their own crooked demeanor and deeds, they have no alternative but safeguard the top crooks who coached them the craft. Proverbial birds of the feather have flocked together. Their droppings are visible to the naked eye. But the leader of the flock is singing a ‘sweeter’ tune. The excessive meat they consumed during their heyday is being taxed now from two different perspectives: Firstly, their earnings have come to a halt as they are no more in occupation of those exalted positions and secondly, their ill-gotten riches are being stretched to the hilt as they are forced to spend them for their own defense and other organizational activities.

Wheels of justice might take time to turn, but turn they will. But the people are getting impatient and irritable, to say the least. Political leadership of the day is alleged to be dragging their feet. For whatever reason, I have no clue. The new Inspector General of Police (IGP) might have the answer. However, whether it’s the investigators themselves or the politicos in power, whoever controls the wheels of investigation, transparency of the process cannot be compromised. So they are actually being tested. Let us see if they pass the test.

However, reenactment of the Shirani Bandaranayke case as was done by and during the previous regime is not acceptable; nor should any official or unofficial instructions to the investigating parties be issued by the politicos in power. Utopian expectations might be sunk; those who are hell-bent on revenge might be disappointed and the not-so- crazy ordinary folks might not even take note of, yet the pressure must be brought upon all who came to power on a platform preaching good governance, transparency and accountability. As the saying goes, no regime in history has been able to fool all the people all the time.

Impermanency of power, whether political or otherwise, is absolute. As Heraclitus, the pre-Socratic Greek philosopher, said long years ago: “Nothing endures but change”. What is absolute is ‘change’. And those who do not have the wisdom to understand this simple but eternal truth eventually become unfortunate victims of that ‘change’. Those who ruled this land of ours during the last twelve years did not seem to have had time to ponder these teachings the value of which they profess to be safeguarding. Playing politics with the people’s emotions and beliefs is dangerous. In the very short run those who practice these brutal intrigues might look to be succeeding. The wealth and pleasures they accumulate in that short spell of time may last a couple generations, yet political pressures do not give any advance notice; there are no symptoms of an impending collapse from power and if such symptoms do materialize, the diagnosis may be misread or totally wrong.

Due diligence, firstly on the part of the public at large and secondly by those who have the ability and desire to use the pen, is of critically significant. Doing nothing amounts to aiding and abetting the wrong-doers. People will remember those who fought for them but they will never forget those who evaded the fight. When one is in politics, one gets entrenched in all the muck and debris of the game; when alluring-power beckons one to an easier and more pleasurable way to make money and seek other worldly desires, all controls and self-discipline go out the window. Indulgence in self-gratification is the prime motive that turns the wheels of life for these corrupt politicians. Ambition bordering on irrational and unquenchable thirst to stay in power until death has defined the path of politics and no ordinary ruler has been able to resist it; nor has any dictator been able to weaken the grip power holds on them. Vagaries of political power have been exceptionally corrupting; victims of that power have been uncommonly vulnerable and the lure of extra perks is ever so inviting. A very few Sri Lankan politicians have been able to defy these odds. But a genuine attempt by the present lot will be as refreshing and soothing as the winds on a hot summer afternoon.