An important witness in a crucial FCID case, Sarath Dissanayake, the driver of former Presidential Chief of Staff Gamini Senarath today lodged a complained with the Human Rights Commission in fear of his life, after officials of the Colombo Crimes Division(CCD) allegedly ‘abducted’ him last Thursday and assaulted him severely. 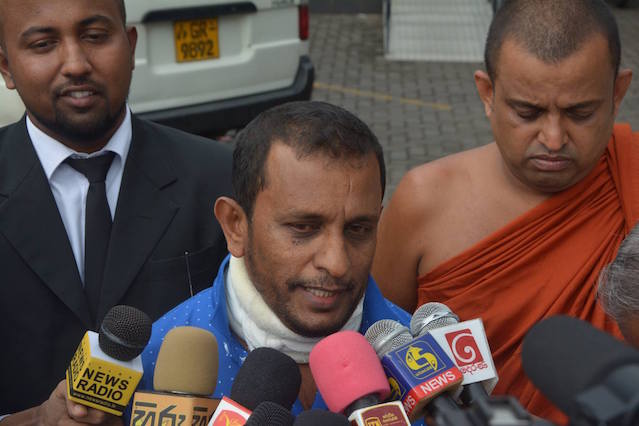 Dissanayake, who is an important witness in several FCID cases in relation to monetary fraud carried out during the previous regime, claimed that the CCD officials had insisted that he takes the blame for the alleged frauds amounting to billions of rupees, instead of naming the real culprits behind the fraud.

“This is the first time in history that an important witness in a financial crimes case is being attacked by the police,” Rajith Keerthi Tennakoon, Executive Director of the Center for Human Rights said.

He said that after Dissanayake approached him and members of the Centre, steps were taken to lodge a complaint with the Human Rights Commission. “The Anti-Corruption Front lodged a complaint on 20th January 2015 against financial fraud. But to date there is no investigation, and now even the lives of witnesses are in danger,” he said.

He went on to add that despite the change in Government on January 8, there is not much of a difference. “Even then we had to protect people, and even today we have to do the same. It appears that only the governments have changed, but people continue to live in fear,” Tennakoon added.

Meanwhile, the lawyer representing Dissanayake told media that a group of men dressed in t-shirts and shorts, and covering their face had knocked on the door of Dissanayake’s home in Piliyandala at around 9 in the night and had assaulted him, and then arrested him and his son and taken them both in the most illegal manner to the CCD office in Dematagoda. “Not a single person was in uniform and even after he was taken to the CCD he was severely beaten by the officials,” the lawyer said.

Dissanayake reportedly had cashed cheques to the tune of over 12400 million rupees alone while working for Senarath from December 2014 to January 7, 2015.