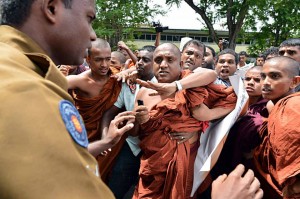 The convener of the militant Buddhist monk brigade Ravana Balaya Iththakande Saddhatissahad been given three vehicles a month amounting to almost Rs 2 million a year, whilst prominent Irida Lankadeepa journalist Prasanna Sanjeewa Thennakoon of the Wijeya Group’s vehicle cost was over Rs 800,000. These figures only for 2014.

These facts were revealed by Minister of Telecommunications and Digital InfrastructureHarin Fernando when the no confidence motion against Finance Minister Ravi Karunanayake was been debated in parliament yesterday. 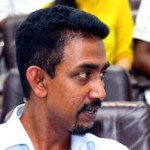 It is yet to be established as to on what basis these vehicles were rented for both monk Iththakande Saddhatissa and Wijeya Group journalist Thennakoon, as they have no direct involvement with the Urban Development Ministry.

This revelation is contrary to the earlier audit report where it was stated that the militant monk Iththakande Saddhatissa was given only one vehicle.

“This reveation is only from the former Minister Weerawansa’s UDA Ministry. We don’t know how many more other monks and journalists benefited through the other ministries. These must be investigated by the Yahapalanaya government too” said an anti corruption activist.