Minister of Megapolis and Western Development Champika Ranawaka has questioned as to why law enforcement authorities have failed to take action against the culprits who assaulted the students at the Jaffna University’s Science Faculty on Saturday. 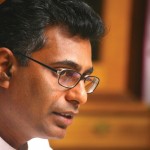 “When seniors at the Kelaniya University ordered their juniors to wear dresses and come to the university, they were arrested and imprisoned because of ragging, but how come no action has been taken against the culprits who assaulted the Sinhala students,” Ranawaka questioned.

He said that the Tamil students are not facing any hindrance in conducting their studies or cultural events at any of the universities in the country, so how come the Sinhala students don’t have the freedom to organize a cultural event at the Jaffna University.

“Are they trying to say that the Jaffna University is only for Tamil students, does this mean that Sinhala and Muslim students can’t go and study there? There is a deeper meaning to this incident, this is not just an assault on students, this is outright racism,” he said.

“No one can deny anyone the freedom to engage in any cultural activity anywhere in this country. These racist and fascist elements must be defeated. If they want it to be an all Tamil university, then it should be shut down. Any child belonging to any community should have the freedom to go and study in any of the country’s national universities. These universities are running on the people’s money. We shouldn’t tolerate this,” Ranawaka said.

He also called on the Tamil political leaders, and Northern Chief Minister C. V. Wigneswaran in particular to condemn the incident. Ranawaka also said that space must not be given for new Prabhakaran’s to be born.

“We must nip this at the bud, we must defeat these elements. The law must apply to each and every culprit who were behind the assault,” he added.