The ethnic fault line in society was exposed in the clash between two groups of students at Jaffna University last week. The immediate cause of the dispute was a late request by Sinhalese students at the university to perform the traditional Sinhalese Kandyan dance at a ceremony to welcome incoming new students. This request was turned down by the organizers of the event. However, the following day when the event took place a Kandyan dancing troupe made its appearance which was resisted by the larger student body. The end result was a violent confrontation between two groups of students who divided on ethnic lines. This resulted in the temporary closure of the university, and the university administration, in an abundance of caution busing the Sinhalese students out of Jaffna. Both sides to the dispute had their cases to make. On the side of the organizers the previous practice had been to only have a traditional Tamil cultural procession as an opening item on the agenda. The request for a change had come only the day before the event when the programme for the event had already been finalized. On the other hand, the students who wanted the insertion of the Kandyan dance argued that a significant proportion of the incoming students were Sinhalese and in addition the Science Faculty which they were joining had a majority of Sinhalese students in it. This was a problem that might have had an outcome based on a win-win solution if the focus had been on meeting the needs of the two student groups rather than on the contrary positions they took, which alas had no meeting point. 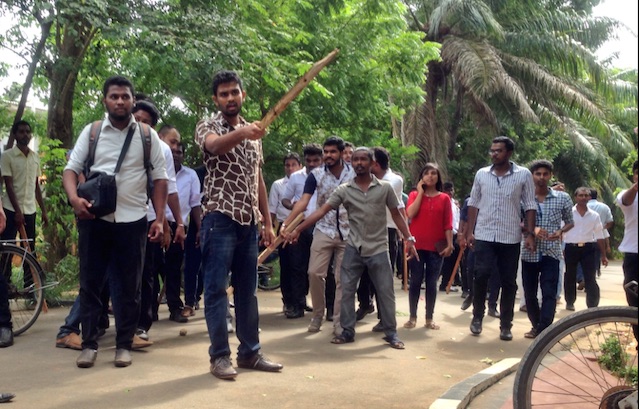 There is speculation that the conflict arose because some of the students wanted a conflict that could be politicized. Most universities in Sri Lanka are invariably hotbeds of extremist politics which are dominated by student unions which tend to be extremist in their orientation. Most of them are also affiliated to national political parties which their leaders might wish to be part of at the conclusion of the period of their university studies. However, the irony is that the majority of the larger student body tends to be moderate and focused on engaging in their studies without getting embroiled in political disputes. As might have been expected some of the political parties and their leaders seized upon the issue in a manner so as to highlight their continuing relevance.

On the positive side, and unlike in the past, immediate actions were taken by a number of actors and on a number of fronts to defuse the brewing crisis. The highest levels of government including the President and Prime Minister gave attention to the developments in order to ensure that there would be a resolution of the conflict. The decision of the Jaffna University authorities to close the university and to send back the Sinhalese students to their homes a safety measure was deemed by the government leaders as too extreme a step, which they countermanded. Instead increased attention was given to ensuring that adequate safety to the Sinhalese students, or any other student f or that matter, was available in Jaffna itself.

In addition, and unlike in the past, there were several statements that were immediately issued by Tamil political leaders and by university teachers from Jaffna that condemned the violence and urged calm. The power and influence of those who sought to calm the situation was much greater than those who might have wished to increase the tensions for their own purposes. As a result the clash between the two groups of students in Jaffna could not grow to communal proportions. The ability of all concerned to prevent the conflict from escalating is an indication of how inter-ethnic relations in the country are better than they have been in the past, and are on an improving trend. On the other hand, probing the roots of the conflict, the Northern Provincial Council issued a statement that identified the demographic pattern of the North and East after the war as being consciously changed and students from other provinces being admitted in large numbers into Jaffna University.

During the past Vesak festival I happened to be in Jaffna and travelled past the university. Its entrance and the park in front of the university buildings appeared to be a sea of lanterns and other Vesak decorations. I wondered whether other universities in other parts of the country, including those where Sinhalese were the dominant population, had Vesak celebrations on the scale that was being practiced in Jaffna University. It is unlikely that the students alone would have had either the economic resources or the physical capacity to put up those decorations on a large scale. In a context in which Tamil grievances have included the sense of their traditional areas of inhabitation being changed by state-sponsored colonization, it is necessary to adopt a more low key approach to highlighting Sinhalese cultural symbols in Tamil dominant areas.

A similar conflict sensitive approach needs to be adopted to modify the system of admission to universities in different parts of the country. On the one hand, it is necessary to keep in mind that the universities are part of a national system in which merit is the primary criterion for selection for university admission. On the other hand, the universities in Jaffna, Batticaloa (Eastern University) and Oluvil (South Eastern University) have been seen by the ethnic and religious minorities as flagships of the cultural ethos of the communities that are a majority in those areas. When the ratio within the student body gets totally out of proportion to the prevailing ethnic ratio in those areas, it creates tensions that can spill over from the universities into the large society. The clash in Jaffna was preceded in March this year by a clash between Tamil and Sinhalese university students in the Trincomalee campus of Eastern University over an incident of ragging.

In Jaffna it was reported that Sinhalese students in the Science Faculty amounted to 60 percent while overall in the university it is about 25 percent. In Eastern University in Batticaloa the situation is broadly similar with the Science Faculty having 76 percent, Commerce 84 percent, medicine 52 percent and agriculture 78 percent in terms of the Sinhalese students for the 2013/14 batch in which the overall Sinhalese presence is about 50 percent.

It may be necessary to restructure the university admissions which is currently based on a national merit-based policy or permit the provincial councils to set up regional universities that can give priority to local area students. There could also be an option of fee paying students who could come from the immediate geographical area which could increase the ethnic representation in the universities to approximate the area in which they are located. Most importantly, a relationship of trust and cooperation needs to permeate the student consciousness and the larger community level also. There is a need for a more concerted effort to be made for people-to-people engagement to develop greater understanding and sensitivity to the concerns of each ethnic and religious community.