Cat is out of the bag..! Rajapakses shed crocodile tears after orchestrating attack on Tennekoon following the killing of Lasantha

(Lanka-e-News – 28.Aug.2016, 6.15 AM) Former Rivira editor Upali Tennekoon and his wife Friday(26) identified the barbaric  scoundrel who seven years ago launched a most brutal attack on them, thereby identifying also the root cause of the cruel and murderous  attacks that were unrelentingly directed against the media during the entire era of the brutal ,corrupt and lawless Medamulana Rajapakse nefarious reign , and which attacks and murders were carefully shielded and suppressed by the same lawless nefarious reign.

This assailant is none other than the suspect in the cold blooded day light murder of Sunday Leader Editor Lasantha Wickremetunge. This ruthless ‘manimal’ is sergeant major Premananda Udalagama of the army intelligence division.

When the identification parade was conducted Friday (26) before the Gampaha acting magistrate Malith Herath , the Tennekoon couple identified this assailant without any difficulty whatsoever.

It is worthy of note that under the caption ‘We must save the Army boys’ -Gampaha notorious twilight judge attempting to rescue army criminals ……’ on the 24 th ,      Lanka e news reported the wicked  conspiracy hatched by Kaveendra the Gampaha chief magistrate to dilly dally with the identification parade with a view to save Udalagama . It was only after our report this conspiracy ebbed away , and the parade was held.

Tennekoon’s wife Dhammika Malkanthi stated , when her husband was being attacked , she fell at the feet of the suspect who was identified today , and worshipped him not to assault . Yet this brutal ‘manimal’ armed with clubs ruthlessly and unheedingly continued with the assault . This episode cannot be forgotten by her any day , not 7 years even   if 14 years have elapsed, she added.

The assault on Upali Tennekooon and his wife was launched on 2009-01-23 morning at Imbulgoda. When Tennekoon couple just got on to the road from their home  on the motorcycle  , this suspect Udalagama and his group have suddenly pounced on them and  attacked the glass of the motor cycle with rods , and had put the couple  down .Thereafter they had  fiercely attacked Tennekoon with clubs. When Malkanthi was trying to shield her husband , she too was attacked . When those in the vicinity started gathering hearing her screams , Udalagama and his group had fled away on their motor bikes.

What the  bestial rascal told the media after attacking Tennekoon

Tennekoons were attacked two weeks after the cold cruel murder of Lasantha in broad daylight. Lasantha was murdered on 2009-01-08 and Tennekoon was attacked on 2009-01-23. At that time Tennekoon and Rivira were staunch supporters of Mahinda Rajapakse government .

Following the attack on Tennekoon , Mahinda Rajapakse who was the president at that time as was customary met with the media chiefs at Temple trees on 27 th January 2009 . At that meeting Keheliya Rambukwella and Rajitha Senaratne were with him.

Mahinda Rajapakse speaking on the occasion shed crocodile tears of which he had never been short of . Mahinda said  the Rivira newspaper belongs to a relative of his , and that Institution carried on its affairs in a manner which did not harm the police or the forces, and its editor Tennekoon was extremely close to him. Hence the assault launched on Tennekoon is tantamount to  assaulting him( Mahinda) ,  Lanka e news reported then  what Mahinda said .  Leaving out Keheliya Rambukwella, today Rajitha and the other media chiefs would testify to this .

Now it is confirmed those responsible for both crimes   is the same  party .Sergeant Major  Udalagama of the army intelligence division has been  identified as the culprit by Tennekoons as well as by  the other group of the victim Lasantha at the two separate identification parades  . At that time the chief of the commanding forces was none other than Machiavellian Mahinda Rajapakse , and the defense secretary was his own younger brother Gotabaya Rajapakse . Hence, otherwise  than the contract of the Rajapakses , Udalagama the hired criminal  could not have had  another private contract to attack Tennekoon as well as  murder Lasantha. Surely Udalagama could not have harbored personal grudges against them or could have had his own private contract to carry out such crimes.

Rajapakses arranged the attack on Tennekoon two weeks after the cold blooded murder of Lasantha Wickremetunge  for one  simple reason: when the whole world was pointing an accusing finger at Rajapakses over Lasantha’s murder, it was aimed   to distort the true picture  and to counter the allegations mounted against the Rajapakses. They wanted to repudiate those accusations by saying,   “don’t you see ,even our own ‘people’ are falling victims to attacks,” and to paint the picture some group  unknown to Rajapakses are committing  these crimes.

Today , when the cat is out of the bag and it is crystal clear who was behind the attack launched on Tennekoon employing  a stooge of the Intelligence division , the hypocrisy , the brutality and bestiality of Rajapakses stand exposed. Need we furnish further proof to establish what cruel , bestial ‘manimals’ are these Rajapakses  who shed crocodile tears ?

In order to make the media coolies who are now bootlicking and kowtowing to the Rajapakses understand the difference between the media suppression and repression that prevailed during the then Rajapakse reign , and the media freedom under the present government of good governance , let us furnish more evidence…

It was on the same day Tennekoon was attacked , Lanka e news Editor Sandaruwan Senadheera was summoned to the 4 th floor of the CID and questioned for 6 hours. That was on 2009-01-23. It was a sequel to a complaint made to the CID by Gotabaya Rajapakse. It was planned to detain the editor for three months , but that at the last minute was changed.

On 2009-01-24 , that is the day following the attack launched on Tennekoon , and the  LeN editor was questioned for 6 hours ,  the Amnesty International issued a communiqué as follows :

”The Sri Lanka government in regard to protection and safety of the media is making only an insignificant contribution. The Government is directly responsible to bring the individuals who are committing murders and persecuting  journalists, before the law.

The officer of the CID special division yesterday interrogated Sandaruwan for 6 hours , and has requested the latter to come to the CID for further questioning next week. This interrogation is following the attack launched on Rivira Editor Tennnekoon and his wife , and gunning down of Sunday Leader Editor Lasantha Wickremetunge at the beginning of the same month.

Since the beginning of 2006 until now , 14 journalists had been murdered . Another group is being detained without cases being filed , while some others who were in the custody of the security divisions had gone missing or had been persecuted. Another about 20 journalists  who faced murder threats have fled the country.”

We are unable to continue LeN without your kind donation. 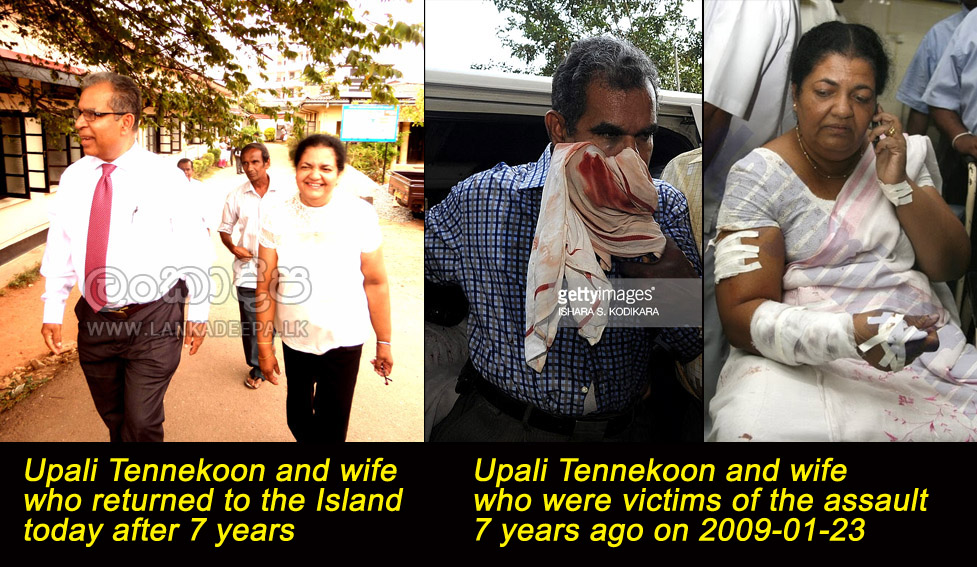 2 discussion on this news