By Our Political Editor
Economic and political issues continue to predominate the Government agenda. Uppermost among them is legislation to give legal effect to the Value Added Tax (VAT) which was raised from 11 to 15 % in March this year. Consultations are under way with the Attorney General’s Department to re-introduce the Bill in Parliament. It was on hold after two Supreme Court rulings – one saying that the way VAT was introduced was illegal. The other declared that the procedure adopted in introducing the Bill to Parliament without the declaration that it was approved by Cabinet was not proper.

The issue figured brieflyat Tuesday’s weekly ministerial meeting. A Ministerial source said the presentation of a fresh Bill in Parliament still depended on the key partners in the Government – the United National Party (UNP) and the Sri Lanka Freedom Party (SLFP) reaching finality on the contents. They argue it imposed severe hardships on the people. The SLFP segment is strongly opposed to the VAT being enforced in its present format and insists it should be changed. The ministers also had a lengthy discussion on the controversial coal tender. It came after Minister Tilak Siyambalapitiya presented a Cabinet Memorandum. It was agreed that the contents of the memo should be examined in close detail at the Cabinet Committee on Economic Matters (CCEM) before finality is reached.

At a recent meeting ministers examined the performance for the first half of 2016. They noted that the percentage of utilization of capital allocations during the first half of 2016 by most of the Ministers and other Spending Agencies was low. Since the Government has decided to fully implement the zero based budgeting methodology from next year, Ministers and Spending Agencies have been required to complete the projects implemented through capital allocations provided in the Budget 2016, this year itself. 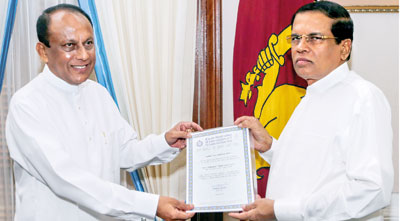 President Sirisena in his capacity as party leader, handing over the letter of appointment to Minister LakshmanYapa Abeywardena as the new district organiser for Matara

Ministers have now been advised to take note of this position and to have progress review meetings regularly. This is with the participation of Secretaries to Ministries, other relevant officials and stakeholders to ensure maximum utilisation of funds allocated this year for Capital Projects.

The Government is also mindful of the on-going projects. This month it granted approval to Chinese companies for the “Overlay to Runway and Associated Works of Bandaranaike International Airport (BIA).” The cost will be US $ 48,600,406.52 plus taxes.

The Airport and Aviation Services (Sri Lanka) Ltd., in terms of a decision by the Cabinet of Ministers, will award a contract and enter into a “Commercial Contract Agreement” for a joint venture with the China National Aero Technology International Engineering Group (CATIC) and Shanghai New Era Design and Reach Institute Company Ltd of the Civil Aviation Authority of China.”

Ministers have decided that Transport and Civil Aviation, Ministry Secretary should initiate action to include “appropriate provisions in the Contract Agreement” to reimburse the relevant taxes and levies to the said company for the services to be provided. The BIA will remain shut down during the day from January 5 next year for three months for work connected with the overlay. Hence, almost all flights will land or take off at night hours.
Highways and Higher Education Minister Lakshman Kiriella also sought ministerial approval to obtain a supplementary loan of US $ 14 million from the China Development Bank (CDB) or any other funding agency. He has said this is for “variations in depth” of roads now under construction and recommendations made by a Special Procurements Committee that contractors were entitled for payments due to variation orders.

The China Development Bank (CDB) provided credit facilities amounting to US $ 500 million for the Priority Roads Project 2 (PRP 2) for the rehabilitation of sections of roads selected on a priority basis. Twenty two contracts were awarded with the approval of the Cabinet of Ministers. According to Mr Kiriella, the loan was to finance 90 % of the civil works contract and a remaining 10%
was to be financed by Government funds. He has told his ministerial colleagues that due to variation orders issued and additional work added to settle all the bills, the loan amount is not sufficient.

The original scope of work consisted of rehabilitation of 601.34 kilometres of road and the reconstruction of 44 bridges, whereas at the completion of the project 626.68 kilometres of roads had been rehabilitated and 73 bridges reconstructed. Kiriella said that roads had been widened to two lane width in some areas, and the additional facilities like foot-walks and drainage systems were provided in town areas outside the original plan.

Prime Minister Wickremesinghe won ministerial approval last Tuesday for a vote of aboutRs 166 million for the Secretariat Co-ordinating the Reconciliation Mechanism (SCRM), a body function under his purview. The Cabinet of Ministers on Tuesday gave approval for this secretariat to function for two years. Mano Tittawella is the Secretary General. The primary objective of the SCRM, he told his ministerial colleagues, is to serve as the co-ordinating body of all reconciliation mechanisms. It will facilitate the exchange of information among various policy makers and implementers. 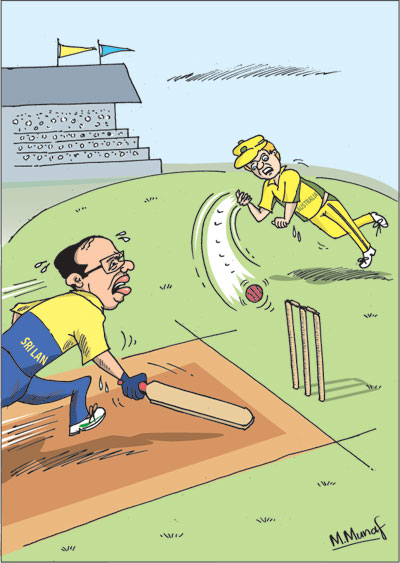 Explaining the rationale behind the move, Wickremesinghe added that Sri Lanka re-embarked on its reconciliation agenda with renewed enthusiasm following the change of Government on January 8,last year. The new Government he noted, in both its electoral and international pledges promised to uphold the right of people via revisiting the post conflict agenda as well as promoting reconciliation. A, A, Dayananda has been named the head of the Secretariat and has been selected on a two year contract for an all-inclusive monthly allowance of Rs 175,000. Other State officials are to be seconded for service from other Ministries and departments.

On the political front, the ‘Joint Opposition’ is now mulling over a number of measures after some of the MahindaRajapaksa loyalists were removed from their posts as organisers both at district and electoral levels. Former President Rajapaksa reacted to the sacking. He told the Sunday Times “many of our organisers asked me what to do about the upcoming annual convention of the SLFP on September 4. I asked them to go back and meet their balamandalasand consult them.” He said they had reported back to him that they did not want to attend the event.

They are unhappy the way the party is disintegrating with the leadership “surrendering everything to the UNP.” Asked for his response on the sacking of party organisers and President Sirisena’s threat that he would expose their secrets if they formed a new party, Rajapaksa declared “everyone has secrets,” What is this “secret” they are talking of, he asked. Commenting on media reports in Australia linking President Sirisena, when he was Minister of Agriculture under his Presidency, to a purported scam, he said “that is dittadammavedaneeyakamma.” Sirisena has denied any involvement in the alleged scam and an announcement from the Presidential Secretariat said he had asked the Attorney General to take action.

Rajapaksa said he would give a studied response to the prevailing situation in the party (SLFP) once he returned from a visit to Malaysia. He leaves on Wednesday. Rajapaksa added that “everyone was now talking about the absence of SLFP ministers in the Cabinet except for one.” It has never happened to the SLFP at anytime before, he said.

Rajapaksa’s remarks came as a Committee named by him to examine matters after the SLFP leadership suspended his loyalists who were both district and electoral level organizers met again last Thursday at the Nelumpokuna Road in Battaramulla. They decided to form a political party under Mahinda Rajapaksa’s leadership. It is not immediately clear whether they would use the SLFP name with an additional title.

The Committee is headed by Basil Rajapaksa and compries Dullas Allahapperuma, Pavithra Wanniaratchchi, Rohitha Abeygunawardena, G.L.Peiris and Mahinda Yapa Abeywardena. The decision came after a lengthy discussion of the situation within the party and Balamandalaya’s loyal to Mahinda Rajapaksa deciding to boycott the annual sessions of the party on September 4.

The Committee has decided that they will have consultations with other opposition political parties to from a “Common Front.” It will function whilst the “Joint Opposition” continues to play its own role in Parliament.

A formidable section is in favour of making a formal announcement on the formation of the party on September 4. There are also moves to demand that their group be treated as a separate entity in Parliament. Being the largest group, they contend, they should be recognized as the main opposition.

Another matter under discussion is the recent passage of the Office for the Missing Persons Act. The Government has declared that it would now entertain amendments from the JanathaVimukthiPeramuna (JVP). These amendments were not moved ahead of the Bill being passed into law due to commotion in the House. When amendments are moved, one suggestion has been for them to go to the Supreme Court using that as a platform to challenge the new law. Small group meetings are being planned in different areas to brief the people on what the ‘Joint Opposition’ calls the dangers from the Office for the Missing Persons Act.

President Sirisena who heads the Sri Lanka Freedom Party has been alive to the developments in the pro Rajapaksa faction, particularly the different measures being adopted. One such instance, reported in these columns last week, is the resignation of organisers, both district and electoral, after some were suspended. He has taken a break from his regular chores to conduct meetings with his party’s high command fuelling speculation there may be surprises at the party’s annual sessions. Among those who have been involved in a string of discussions at his Paget Road residence were one time President Chandrika Bandaranaike Kumaratunga, SLFP General Secretary DumindaDissanayake, and UPFA General Secretary MahindaAmaraweera.

There is little doubt that rivalry between the two factions within the SLFP would exacerbate, particularly with Rajapaksa loyalists deciding to boycott their annual sessions. Crowds will not be an issue at the SLFP convention in Kurunegala. Arrangements are under way by organisers to have crowds transported in buses from different parts of the country. The issue, however, is clearly the parting of the ways. If rival faction members choose to say they are going it alone in Parliament, further separation of the party will become inevitable. Even sacking those dissidents would entail a legal process, enough time for them to consolidate. Just a week away from their annual convention, there is little doubt that the SLFP is in deep crisis.