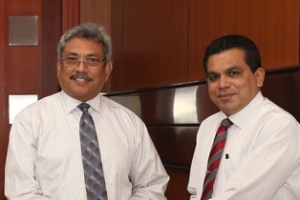 They were arrested after they arrived at the Commission to record a statement.

Last week, the Commission filed a case at the Colombo Magistrate Court against former Defence Secretary Gotabaya Rajapaksa and Avante Garde Chairman Nissanka Senadhipathi on charges of corruption under the Bribery Act. As per the charges by the Bribery Commission, eight suspects including Senadhipathi, Fernando and former Defence Secretary Gotabaya Rajapaksa have been charged with allowing Avante Garde to maintain a floating armoury, thereby resulting in them making an unlawful profit of Rs. 11. 4 billion.