Maithripala Sirisena has come up with his new version of “Thana Patiya and Madu Waligaya”. He has exposed his true intentions OF STAYING IN POWER with his now infamous speech at “Sathviru Heritage” function held at the Sri Lanka Foundation Institute, organized to transfer ownership of houses and properties to the security divisions. What has made him change overnight? Does he want his second term or is there a threat of a coup by Gota and his merry men, or a decent enough kickback offered by the Sri Lankan Viktor Bout, the Senadipathi of Avante Garde fame. He has found fault with independent commissions acting independently. 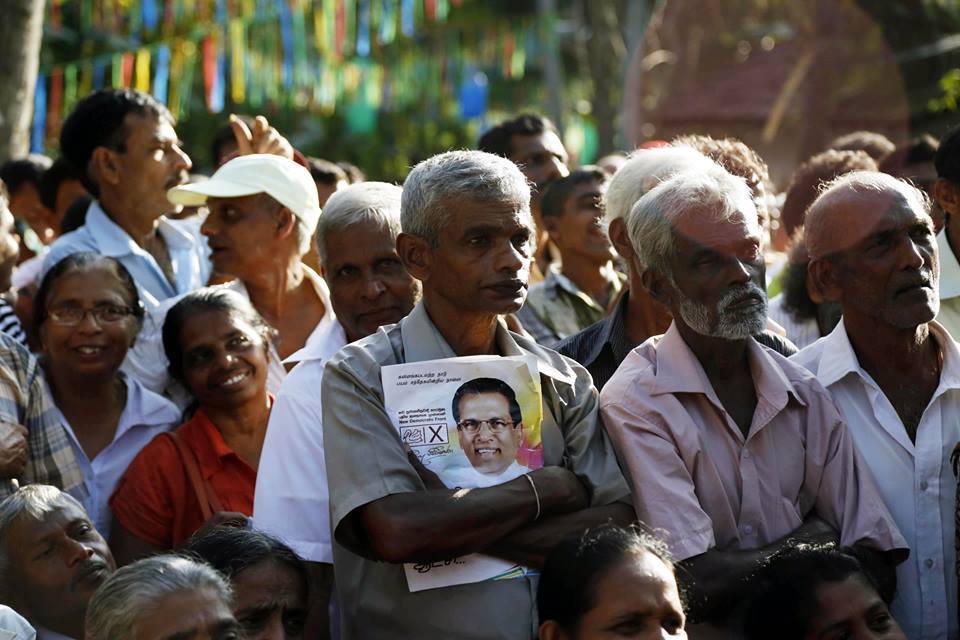 It is pertinent to recall the speech made by our globally acclaimed head of Good Governance in Sri Lanka, President Maithripala Sirisena’s at the Anti Corruption summit in London on the 12th of May 2016.

“I thank Hon. Mr. David Cameron, Prime Minister for inviting me to attend this Anti-Corruption Summit in London. I consider this summit a significant step to combine our collective efforts to fight corruption that is wide spread all over the world.

Corruption is one of the factors that promote political violence and other forms of human rights abuses. Sri Lanka went through such a stage during the previous administration. The people reacted strongly against corruption by changing the corrupt administration by the power of the ballet in January 2015 at the Presidential election and again at the Parliamentary election in the August 2016.

The people acting democratically got rid of the corrupt leaders and their supporters. The current national unity government consists of the two major political parties in the parliament under my leadership and the other led by Prime Minister Hon. Ranil Wickramasinghe. We were elected to office on the policy platform of democracy, good governance and rule of law. Therefore, we consider our prime duty to root out of corruption from the country. We have already taken significant measures for this purpose. I am happy to inform this forum that with the introduction of the 19th amendment to the constitution I handed over most of the executive powers to the Parliament except those powers Supreme Court decided cannot be transferred. However, even under this limited situation as a demonstration of my commitment to transparency, accountability and the rule of law and my firm determination to route out corruption I established an anti-corruption secretariat, a special presidential commission to investigate. I also appointed a commission to investigate allegations of bribery and corruption. The Right to Information Act has been presented to the Parliament and the National Audit Act will be presented to the Parliament shortly. All these institutions are working satisfactorily. A special division within the police titled Financial Crimes Investigation Division (FCID) was established to expedite investigations on major financial crimes. They have been given all necessary facilities to carry out their duties. They have already commenced flings of several major financial charges. We note with appreciation the support and cooperation already extended to Sri Lanka by several countries including UK, USA , India and Switzerland as well as the World Bank to strengthen the investigative agencies regarding the stolen assets. We are in the process of seeking information and assistance to trace them . We are happy that summit proposes to establish an International Anti- Corruption Centre, all of us as leaders need to act collectively to strengthen our own law enforcement agencies to track the corrupt and recover the proceeds of corruption.

Sri Lanka is fully committed to such firm action. Thank You.”

The above noble words have been flushed down the toilet with his statement of 12th October 2016 where he questions the right of independent commissions to act independently. The tragedy is, Sri Lankan politicians will find it hard not to poke their fingers in to independent investigations when it hurts them, especially when their children run riot at nightclubs, and commit murder.

What has changed this once loved president who is beginning to expose his true self? The greed for power is evident with his abuse of presidential privileges and his ever-growing extravagance at the presidential secretariat. His frequent travel with large entourages is reminiscent of the Rajapaksa extravagance. The abuse of staff and filthy language used by the president at the presidential secretariat will not be accepted in the Mariyakade slums. Power corrupts, and what has changed this simple Grama Sevaka from Polonnaruwa? He is getting drunk with power and has become a quick learner to follow in the footsteps of the most corrupt Rajapaksas. First, it was the appointment of his own Brother Pallewatta Gamaralalage Kumarasinghe Sirisena to the high position of Chairman of Sri Lanka Telecom to pocket some millions a month in to his own bank accounts. Millions more have been moved in to the pockets of the Presidents “Chatu” and her husband in advertising contracts. In the shortest possible time, he is beginning to outdo what the Rajapaksas did over a decade of unprecedented corruption. Now, he fears that he would be brought before the financial investigation units, should he be pushed out of his presidency after his first term. He announced upon his election in January 2015 that he would not seek a second term. He may now be even fearing an impeachment.

He has also exposed himself of being the person who has been guarding the interests of the Rajapaksa family and their loot by derailing the investigation process into corruption, the Thajudeen and Lasantha murders and other financial irregularities that has cost the country over 80 billion. He has already forgotten that the UNP elected him to the high office without the support of even 20% of the SLFP vote. Now, he fears that his SLFP lot would be placed 4th if the Local Government election is held with the UNP expected to lead, Mahinda Rajapaksa in second place, the JVP third and Sirisena’s SLFP in the fourth place.

He has dug his own grave by bringing in all the rogues from the former regime of Mahinda Rajapaksa in to Ranil Wickremesinghe’s cabinet so that the SLFP would not break up. His selfish tryst with the corrupt has brought the politics of Sri Lanka back to the wheeler dealing days of the Rajapaksa regime. The selfish Sirisena has sacrificed the people’s rainbow revolution.

It is time that Prime Minister takes the bull by the horn and takes Sirisena head on. The President has been shooting his mouth out of turn far too many times and has made the PM look a fool. The ever-gentlemanly Ranil has not opened his mouth in public. Its time that the UNP took the reins and brought Sirisena and his 40 thieves to justice or suffer the same fate of the 2002 UNP government.