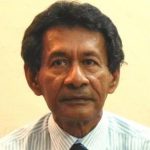 Just as pathetic as the recent repugnant public criticism of the Bribery Commission, CID and FCID by the President, is the stupidity of some Ministers who have been trying to vainly put a good face on a bad speech, as if the people of this country are fools who can’t understand spoken Sinhala and will believe anything they are told. Where millions have heard and watched the widely circulated video recordings of the President’s speech for themselves, the people are not deceived. People know exactly what he said and meant notwithstanding the distortions of politicians who would pull wool over their eyes. Indeed if nothing else the resignation of the Director General of the Bribery Commission is final proof that the President’s remarks were deeply offensive to such agencies.

There is of course nothing new in the tendency of Ministers to embellish the truth for the sake of damage control and tell us that everything is hunky-dory. One example from history is that of a current Minister who speaking at a public function two days ago is reported to have said that “the President had not found fault with the Commissions . . . had not included any remarks intended to weaken the functions of the independent commissions . . . but had only emphasised the importance of protecting the dignity of war heroes who saved the country from the clutches of terrorism”. So I suppose we are being asked to believe that the President was only being kind to the Commissions ! Interestingly in clause 397 (P.83 ) of the Human Rights Council OHCHR Report on Sri Lanka as an example of the previous regime repeatedly denying any responsibility for enforced disappearances, the report specifically mentions the name of this Minister who when he was a Minister in that regime had in 2007 (quote) “ claimed that the reports about people who disappeared were the result of the “propaganda strategy” by “a ruthless terrorist organization” which tried to ‘paint a bleak picture internationally to bring pressure on the government so that our resolve will be weakened’”. So much for his credibility today.

The reality is that the President’s ill conceived criticisms were a sad betrayal of the many good people who trusted him to uphold the rule of law and relentlessly bring criminals to justice without fear or favour whoever they might be. On the contrary the threatening tone, strong language, and content of his emotional speech reflected an abuse of power in seeking to demean, demoralise and put political pressure on these valued independent agencies investigating corruption and crime. Indeed his outburst was reminiscent of the arrogant contempt for independent bodies we had come to expect from the previous Rajapaksa regime in which ( lest we forget ) this President sat as a Minister for about 9 long years during its worst excesses.

Far from criticising the brave hard working officers of the Bribery Commission, CID and FCID the President should be praising encouraging and honouring them for persevering with a complex – even dangerous – job under difficult conditions. His attempt to seemingly put the brakes on the work of these institutions and slow them down runs contrary to public impatience that investigations should be pursued even more rigorously with more wrongdoers being brought to justice more speedily. Perhaps his remarks were provoked by anxious fears that going after senior figures in the military establishment might be politically unpopular making life harder for him. But that is his problem to solve. Such considerations must never detract from the imperative to bring wrongdoers to justice without fear or favour.

The President seems ultra sensitive to the feelings of high ranking security forces personnel being investigated as if gratitude to them for winning the war should make us tread more lightly in dealing with their offenses. But he has forgotten the cardinal principle that all men and women are equal under the law irrespective of rank, position, titles, status, medals, honours and past record of service to the nation however distinguished. Indeed it is possible to argue that misdemeanors by the security forces at any time should be investigated more urgently and punished more severely because of the exceptionally high standard of discipline and morality expected of those whose statutory duty it is to protect innocent people and defend the nation. In this connection the President’s proud boast about disarming the UNHRC, neutralizing its concerns about war crimes and circumventing the need for foreign adjudicators in any investigation – sounded puerile and unprincipled. It is as if his patriotic duty was cleverly outwitting the UNHRC – not uncovering the truth whatever that may be and dispensing justice.

Sadly the President’s criticisms of the Bribery Commission, CID, and FCID at the “Sathviru Sanhinda” function on October 12th were a monumental blunder. His credibility is in shatters opening doubts about his commitment to the purity of public life. He has deeply hurt, confused, and upset his own supporters. He has undermined the independence of respectable investigative agencies and demoralised good officers who are fighting valiantly to bring those guilty of crime corruption and cover up to justice. Sadly he may have compromised the good name and respect he has personally built up as President both locally and abroad. Finally he has energized the demonic enemies of the government who are gloating over the chaos and confusion created by his comments, and are in a position to taunt those who yearn for truth, justice and good governance.

In this situation whether the President’s ill conceived intervention was provoked by naivety, fear, ignorance, political cunning, or something else need not concern us. Whatever that may be it is hoped that President Sirisena would have the humility and good sense to do that which may help redeem the unfortunate situation created by his deplorable criticisms namely :

(a) Openly retract his criticisms of the Bribery Commission, CID and FCID

(d) Reaffirm his unequivocal commitment to strictly upholding the rule of law and speedily bringing those guilty of crime and corruption to justice whoever they might be.