‘Sinhala Police, gunning down Tamil students in Jaffna, is not different from genocidal military’

[TamilNet, Friday, 21 October 2016, 17:27 GMT]
Two Tamil students of the Art Faculty of the University of Jaffna were cold-bloodedly gunned down by Sinhala ‘policemen’ at Kokkuvil, Jaffna, on Thursday night. Both the students died due to gunshot injuries, medical sources at Jaffna hospital said contradicting the cover-up of Colombo. The latest crime committed by the Sinhala Police carrying automatic rifles in the occupied Tamil homeland is a serious security threat to the nation of Eezham Tamils. Sinhala police is not different to the genocidal military as far as the nation of Eezham Tamils are concerned. It was the violent acts by the Sinhala Police in Jaffna that triggered Tamil militant response in the late 70s, Jaffna University student leaders told TamilNet condemning Colombo and its international collaborators, who have failed to deliver justice to the crimes committed against the nation of Eezham Tamils in the past.

Two students, 24-year-old Sulaxan Sukantharajah, from Kantharoadai in Jaffna and 23-year-old Gajan Nadarajah, who hails from Ki’linochchi, were gunned down around 11:30 p.m. on Thursday at Ku’lap-piddi in Kokkuvil, which is situated a few kilometres north of Jaffna city.

The two students were riding in a motorbike towards their hostel when the brutal incident took place. 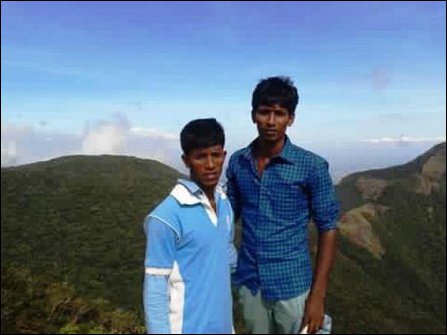 The students slain by Sinhala police at Kokkuvil in Jaffna

The site of crime, according to SL Police.

The SL police first delayed the news and attempted to cover up the killings Friday morning describing that the students had died in a motorbike accident. No one was allowed to enter the area of the incident. However, the neighbours in the area alerted the student community saying that they heard more than three gunshots Thursday night. Later, the Sinhala police started to admit that it’s constables had fired after the students failed to stop their motorbike at a police barrier. Even this claim is yet to be independently verified.

Sulaxan was shot three times and died on the spot with injuries to his chest, neck and spine while Gajan, whose corpse was handed over to the family Friday, died after sustaining wounds when the motorbike crashed. However, informed medical sources Friday night said Gajan also had a gunshot injury and the SL police had attempted to cover it up to look like as he died from crash injuries.

The entire Tamil student community is shocked by the brutal act of the Sinhala police. Colombo government, through its public relations offices, issued statements that the SL President had taken immediate action to investigate the crime and that five policemen have been suspended from duty and placed under investigations. But, there has been no credible and transparent facts to prove these claims, the student leaders in Jaffna said.

The appeasement coming from the international actors, mainly from the USA, was the prime reason for genocidal Sri Lanka continuing its militarization in the occupied country of Eezham Tamils, the Tamil students further said.

While the entire Tamil world was demanding immediate de-militarization of the occupied North-East in the island, the USA brought the so-called ‘consensus’ resolution joining hands with genocidal State of Sri Lanka at the UN Human Rights Council. “This act has not only emboldened the Sinhala rulers in the island, but every Sinhala person carrying weapons in their hands while serving the interests of the genocidal State,” a senior student leader said calling on the global Tamils to course-correct the global powers without getting deceived to their so-called ‘soft-diplomacy’.

The SL State and the Sinhalese will only listen to ‘hard-diplomacy’ coming from the international community, the student leaders, who met to assess their response to the crime, told TamilNet Friday evening.

The policemen behind the crime belong to Chunnaakam Police, which was also responsible for the slaying of a Tamil youth for taking part in a memorial meeting observed during the Tamil Heores week in November 2011.

The same police unit has also been threatening a Tamil family in Kokkuvil on 05th October. After a police visit, a gunshot was fired at the house to threaten the family.