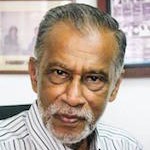 Racist politics cost $200 billion, death and destruction: Yet monster of racism begins to raise its ugly head and the country, many fear, is heading towards yet another disaster

Two hundred billion US Dollar is a colossal sum of money especially for a tiny country like Sri Lanka though blessed with the best of natural wealth and a literate population. Converted even at the rate of Rs 145 it would be around 29,000 billion rupees.

Had this national wealth been utilised to develop and modernise the country by improving education and health care facilities, develop infrastructure, launch industrial and commercial ventures, create jobs, eliminate poverty and raise living standard this island today would have become “Paradise” in all respects.

It would have also been a shining example to the entire third world as it was during the time of our independence in February 1948.

Unfortunately this large sum of money was wasted on fighting an unnecessary ethnic war which was the direct consequence of destructive racist politics of all shades of mainstream political parties.

India’s former National Security Adviser and Foreign Secretary, Shivshankar Menon had disclosed in his book “Choices: Inside the Making of India’s Foreign Policy” that the estimated cost of this three decade old war was around US$ 200 billion. This estimate does not include the “opportunity cost” to Sri Lanka which was once the fastest growing and the most open economy in South Asia.

The final stages of the war had created a little over 300,000 refugees or Internally Displaced Persons (IDPs). The war had also left 1.6 million land mines in the Northern and Eastern Provinces.

But the real casualty of the war was Sri Lanka’s composite society, something that the LTTE and Sinhala chauvinism are “equally responsible for”, stated Menon who had given complete details about the loss and destruction to the country covering almost every possible area.

The LTTE was militarily defeated in May 2009.

Deaths and destruction would certainly make any one to shed the cancer of chauvinism and racism, learn from the past mistakes and seek means to reconcile the devastated communities to move ahead for a better future for all.

Unfortunately for the country and its suffering minorities Mahinda Rajapaksa government abandoned the wounded and battered Tamils. To the shock of everyone he turned his attention against the island’s helpless and voiceless Muslims who also suffered immense during the war.

In fact this is what the chauvinists always claimed -“first we will deal with the Tamils and then take of the Muslims”.

Thus in the hour of glory Rajapaksa government unleashed unprecedented violence against the devastated Muslims for no valid reason. While the world is moving ahead under the global economic changes sweeping all corners of the world, here in the island few hundreds of Sinhala racist began to take the country back to Dark Age.

Rajapaksa government stooped to such low that it even allowed the BBS to invite to a red carpet welcome usually extended to heads of state, Myanmar’s convicted criminal Ashin Wirathu, butcher of Muslims, to declare war on Islam and Muslims.

During Rajapaksa’s corrupt, criminalized and commercialized autocratic regime, law and order virtually collapsed, economy was in doldrums, people lived in fear and on the whole there was an atmosphere of fear.

It was under such circumstance that President Maithripala Sirisena won the 8 January 2015 presidential elections and defeated the dreaded Mahinda Rajapaksa.

There was great hope among people of all communities in the country as President Sirisena came with the slogan of restoring law and order, ensure freedom ,move towards communal harmony and clean up the country of crime and corruption.

Thus overnight the situation changed. There was fresh hope everywhere. With the carnage fresh in the minds people, quite rightly, expected that they could look forward to a peaceful and better future.

However it didn’t take long for everyone to realise the shocking reality.

Within two years today we are back to square one with President Sirisena and Prime Minister Ranil Wickremesinghe refusing to fulfil their promises. Those accused of large scale corruption and crimes are free and, instead of bringing them to book, the government seems protecting and guarding them.
Most people are fed up.

On top of all comes the vicious and violent campaign against Islam and Muslims spearheaded by the very same BBS General Secretary Galagoda aatte Gnanasara Thero. He remained subdued after the new government came to power only to raise his ugly racist head again to poison Sinhalese minds against Muslims to create a July 83 type anti Muslim violence to suit his local and foreign masters’ agenda.

Under normal circumstance, where there is rule of law, he would be in custody for his hate campaign including his role in the Aluthgama-Dharga Town and Berwala attacks on Muslims.

The tragedy is that the government refuses to take action against his extremely dangerous and destructive path and his lawless activities. Instead he is protected and the Justice Minister Wijeyadasa Rajapakshe himself says that the government cannot arrest him. The country is shocked that Minister Wijeyadasa started speaking BBS language antagonizing the minorities especially Muslims

It was under such political environment he participated at a meeting of heads of religious leaders summoned by president Sirisena.
People are confused. Their hopes are dashed. They do not know where to turn to.

This anti-Muslim campaign has all the ingredients to turn the island into a killing field from which it may unlikely to recover for decades in view of the existing local and global political environment.

The often raised question is who are these racists? From where did they emerge? Who is financing them? Why no legal action against them? Isn’t it time that the government step in and save the country from yet another potential communal carnage? So far all appeals from the Muslim community and the mainstream Sinhalese community to stop this hooliganism have fallen in the deaf ears.

Today these racist rabble rousers are law unto themselves. They openly violate laws, harass and humiliate Muslims claiming that the government has agreed to their agenda.

In this climate of hate and fear, Muslims living under siege. They feel that they were abandoned by the government and betrayed by their own politicians. Their appeal to the government to contain this ethno religious fascism seems to falling on deaf ears. Muslims’ now appeal to Muslim parliamentarians to leave the government and stop humiliating the community.

Judging from developments since the end of the war in May 2009, one could conclude that no lesson was learnt and, many fear, that the country is heading towards yet another disaster.