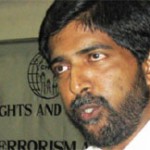 On January 20, the Court of Appeal dismissed an appeal against the verdict delivered by the Colombo High Court filed by the victim’s wife Shashikala Raviraj on grounds that the plaintiffs were not present in court when the case was taken up for consideration.

However today, when the counsel of Raviraj’s family, M. A. Sumanthiran made submissions to the Court of Appeal, the bench after considering the submissions decided to reinstate the appeal.

In December, the Colombo High Court acquitted all five suspects including three former intelligence officers of the Sri Lanka Navy. The decision was received with vehement opposition with even Ministers in the government condemning the court decision and also questioning the independence of the country’s judiciary.

Raviraj was shot dead in November 2006 in Colombo.