[TamilNet, Friday, 17 February 2017, 23:13 GMT]
The occupying military of genocidal Sri Lanka has put up notice boards threatening the protesting families and the people visiting Keappaa-pulavu not to enter the lands that have been seized from the uprooted families. “This land belongs to the Air Force. Unwarranted entry is prohibited. Those entering unwarranted will be targeted by gunfire,” say the warnings that have been put up inside the lands of uprooted people on Friday. In the meantime, SL Air force personnel have been shooting photos using professional DSLR cameras threatening the visitors expressing solidarity with the protesters. Tamil politicians, except those from the ITAK collaborating with the SL regime, have started to stay overnight with the protesting families as military threats have started to escalate. The families have been staying in front of the SL military base with their children for continuously for 18 days. 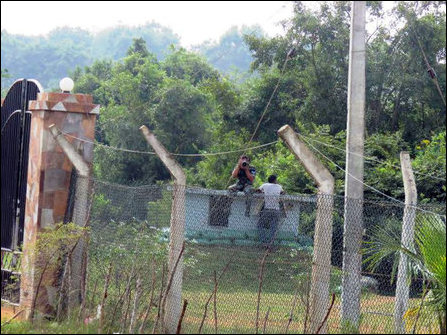 SL soldiers at Keappaa-pulavu were using cellphones and video cameras until Friday. Now, they have deployed surveillance personnel with professional DSLR cameras, say families waging protest outside the main entrance to the SL Air Force military base at Keappaa-pulavu 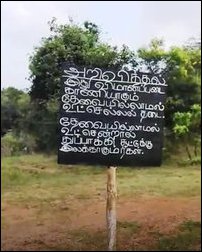 The warning put up by the SL Air Force inside the lands of Keappaa-pulavu people. Note the broken Tamil at the end of the warning.

In the meantime, religious dignitaries from South, including a group of Buddhist monks, have visited Keappaa-pulavu to witness the struggle being waged by Keappaa-pulavu and Pilak-kudiyiruppu families on Friday.

The Bishop of Jaffna, Rt Rev Dr Justin B. Gnanapragasam, has issued a statement urging immediate action to resolve the demands of the families engaged in the continuous protest on Friday.

The demands of the people could be met if there is proper will at the part of the government, Bishop Gnanapragasam said adding that the matter will be taken up at the Bishop’s Conference on 22 February.

The protesting families at Keappaa-pulavu said the ITAK politicians, particularly M.A. Sumanthiran, have been urging them to abandon their protest and instead consider a visit to Colombo to talk with the government. The families have responded by demanding SL government leaders to come and talk to them at Keappaa-pulavu. “We are not prepared to get deceived once again,” said

Perhaps, the ITAK leaders and their mentors have forgotten how the people of Keappaa-pulavu expressed their anger against the ‘agenda-setters’ who betrayed Eezham Tamils at the Human Rights Council in Geneva by not demanding de-militarisation of the Tamil homeland and a proper political settlement to the genocide-affected nation of Eezham Tamils, said political observers in Vanni.

Four years ago, on 31st January 2013, the people of Keappaa-pulavau showed their resolve by closing themselves inside their huts and refusing to come out when the Parliamentary Under Secretary of State of the UK Foreign and Commonwealth Office, Alistair Burt MP, accompanied by the occupying Sinhala military, wanted to ‘speak’ to the uprooted Eezham Tamils.

In the meantime, civil groups, rights and political activists across North-East have resolved 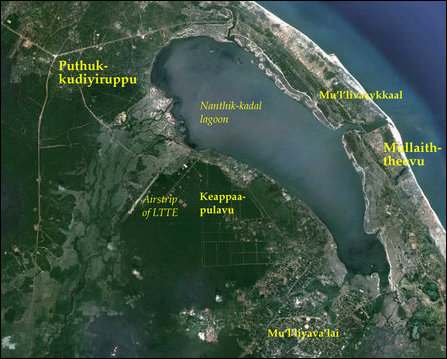 The protesters have also reiterated that no political party or group is behind the initiation of their struggle.

The protesting women have clearly articulated how they were being deceived each time they staged a protest in the past and how the solutions provided by the SL State, such as the ‘model village’ provided to them by the SL military deprived them of a decent life and livelihood.

Some of the video and audio interviews and footage recorded recently by TamilNet are provided below to illustrate the demands and the resolve of the Keappaa-pulavu people, who tell their own story.

These interviews also document the role of women in articulating the demands.