In a dramatic turn of events the investigation into the abduction of Keith Noyahr, the Criminal Investigation Department has found that the abductors had made phone calls to Gotabaya Rajapaksa just after the abduction. 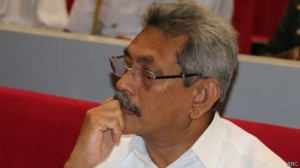 Former secretary to the MOD – Gotabaya

Using the newly imported equipment the CID has managed to trace the call log details of the abductors’ and Gotabaya Rajapaksa.

Keith Noyahr was abducted and mercilessly assaulted in 2008. He fled the country with his family and out of sheer fear did not even make a statement to the Police. The abductors blindfolded him and carried him to the store house situated within a large land in Dompe. His hands and feet were tied and then strung on to a pole akin to hauling a dead carcass. Keith Noyahr was stripped, his belongings including his wedding ring taken, the abductors continued to assault wanting to know who his informants were. The true journalist that he was, even though bleeding profusely and in immense pain, never did Noyahr betray his sources.

The Dompe land and the house including the store was visited by Major Bulathwatte regularly as he had an intimate relationship with a lady living there. When Keith Noyahr was abducted it was the CEO of The Nation Krishantha Cooray who ran helter skelter to trace him. Krishantha Cooray contacted other Media houses, Embassies, and NGOs, who in turn sprung into action.

Senior DIG Anura Senanayake too was contacted and a team from the Nation including Cooray went along the telephone path which led to Dompe. For some unknown reason this team turned back from Dompe and abandoned the search. Retired DIG Senanayake could answer as to why this was done. CEO Krishantha Cooray then contacted Karu Jayasuriya for help. Help did Karu Jayasuriya. He called Mahinda Rajapaksa !!!! Keith Noyahr was released a few hours later.

When Keith was held in the storehouse in Dompe, the lights were turned off and he was blindfolded. Several hours after continuous assault, he had heard a telephone ring and a voice answer in English. “Yes sir, Yes Sir”. A few minutes later the same voice had approached him and asked him to wash himself and dress up. The tone of the voice of abductors were conciliatory after the telephone call. He was brought back in a circuitous route and released. Wedding ring returned, purse not.

This abduction and assault was never investigated. The common perception was that the abduction was done at the behest of the then Army Commander Sarath Fonseka.

One must recall that in 2008 up to the time the war was ended former President Mahinda Rajapaksa, Gotabaya Rajapaksa and Gen Sarath Fonseka were on the same page. Squeezing buddies. It was Gotabaya Rajapaksa who took pole position to safeguard not only the former Army Commander but all the military and allied forces men even when there was mounting evidence of abductions and other criminal acts. Remember who said that Gen Fonseka was the best Army Commander in the World?

Military Intelligence head Hendawitharne and his immediate subordinate Amal Karunatilleke too were in the habit of reporting to the then Secretary of Defence Gotabaya, directly. Telephone records show the trace of reporting from the time Keith Noyahr was abducted to the time he was released and thereafter.

“The CID which renewed investigations into the many murders, abductions and assaults which occurred during the Rajapaksa regime, seem to be drawing first blood. Apart from abductions and disappearances of civilians for extorting large amounts of money, the hunting of journalists who had alternate views to that of Mahinda Rajapaksa’s regime had damaged the image of the island nation.” a well informed source to Colombo Telegraph.

According to the Foreign Ministry sources, increase in tourism and foreign direct investments being of utmost importance this year, success in investigations into murder and abductions of journalists too will be of equal importance to achieve the first requirements mentioned above.

A senior Government official, who did not wish to be named, pointed out that tourists do not visit a country that does not respect the rule of law nor where voice of dissent is stifled. Neither would foreign direct investments pour into a country where accountability is absent. 2018 will be a make or break year for Sri Lanka financially, when a major portion of the huge borrowings of the Mahinda Rajapaksa regime will be up for repayment. “Remember Sri Lanka thus far has not reneged on her foreign debt on due dates. Never.” he said.

“It is laudable that President Sirisena nor Prime Minister Wickremesinghe, has blocked the investigations of the CID. There is a powerful message in their silence. Mahinda Rajapaksa and his coterie in the Joint Opposition has from time to time tried to whip up extremist and racist feelings whenever a military officer was questioned or remanded over a criminal offense. A section of the Buddhist clergy too have been misled by these sentiments. THEY SHOULD READ Major General Kamal Gunaratne‘s book ROAD TO NANDIKADAL ( Pg 55) where the decorated officer writes how ashamed he was of military men resorting to criminal acts. The Major General has indeed made several references to acts of criminality by military men and the need to bring them before the law in order to preserve the good name of the Military and of Officers and Gentlemen. His position is absolutely right but is quite the opposite of former President Mahinda Rajapaksa, Gotabaya Rajapaksa et al. In the eyes of the Rajapaksa’s the entire military be they deviant or not are War heroes. Why? It is obvious.” a defence analyst told Colombo Telegraph.

“Painstaking detective work resulted in the CID finding out the details of the Noyahr assault. As Major General Kamal Gunaratne said in his book, it would be best if the military shed the rogue elements sooner than later so that the true war heroes could be celebrated and revered. The present Yahapalanaya government of President Sirisena and Prime Minister Wickremesinghe should know that all their grandiose plans for Sri Lanka will come to naught if the patriotism card is used by Mahinda, Gota and others to thwart constitutional reforms and development. The country did believe that there was criminality and corruption during the Rajapaksa era and they must be held accountable. Put away if found guilty. THERE IS NO OTHER WAY.

“The Keith Noyahr investigation is but the tip of the iceberg. Await more.” the defence analyst said.

Five army officers, including a Major have been suspended by the Army for their alleged involvement in the abduction and assault of former deputy editor of The Nation Keith Noyahr. 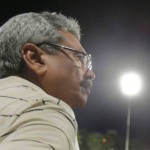 The five army personnel who were arrested by the CID over the weekend are currently in remand custody, as ordered by the Mount Lavinia Magistrate.

Noyahr, a senior journalist was abducted in 2008 near his residence and was severely beaten but was released the next day. The incident happened just days after Noyahr wrote an article critical of Sarath Fonseka in his weekly military column published in The Nation. Fonseka now serves as senior minister in the present government.

However, in a new twist, it appears that the blame is now being put on former defence secretary Gotabaya Rajapaksa, for being the person who orchestrated the incident.

Soon after his abduction and subsequent release, Noyahr who sustained serious injuries, left the country with his family.