Chandrika’s call for party reform echoes what masses want from all parties: ‘Break free from rogues and come clean’
Mother knows best! The Matriarch of the SLFP, the twice elected former President Chandrika Bandaranaike Kumaranatunge struck a blow for all right thinking members of the party her father SWRD founded when she declared last week that the SLFP must break free from joint opposition crooks and murderers and go it alone with a new set of above board faces. 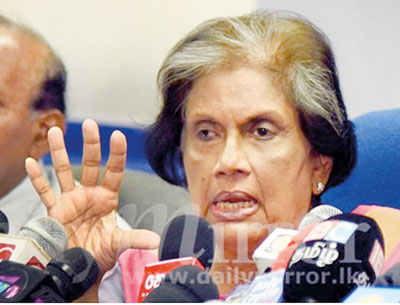 CHANDRIKA: ‘SLFP vote base will increase if we throw out the corrupt MR faction’

“All the crooks and murderers are with Mahinda Rajapaksa, “ she told a group of foreign correspondents in no uncertain terms last week. “The SLFP can increase its vote base, if it makes a clean break with his group of MPs. Their campaign is aimed at scuttling the criminal investigations against them and not out of love for the future of the country.”

This call – even though it comes belated – must win a round of applause not only from SLFP members but also from the UNP supporters, from all those who clamoured for clean government and voted for the Maithri – Ranil combination in the belief that their ballot would lift this nation from corruption’s gutter.

After a pre election campaign heavy with charges of mega corruption leveled against the Rajapaksa regime and loaded with pledges to crackdown and bring to justice all those who had plundered the national coffers, the election of Sirisena to the presidency seemed not to have raised the nation above the sewers.

On January 9th 2015, the newly elected president had two roads facing him. The high road to cleanse the nation of the evil that had engulfed it. Or the low road of political expediency. He chose the low road. He simply had no choice.

Though he had won the presidency, his hands were tied by the composition of the parliament he inherited. Almost all the SLFP members were beholden to Rajapaksa. And the former president had their files too as he had announced during the campaign conveying a sinister threat to expose any pole-vaulter to the Maithri camp. In order to obtain the two third majority Sirisena needed to enact the 19th amendment to the constitution, he needed the support of the very men and women he had condemned as corrupt whilst he was the joint opposition presidential candidate. But in the first few post presidential election months, he was their prisoner. To the people’s horror, instead of isolating them, he was forced to take some of them to his side and make them even cabinet ministers. He had no alternative. But a great majority, most of them who had passed beyond redemption, chose to stay put in the Rajapaksa camp.

If the President’s decisions to make some unsavoury characters government ministers was understandable in the first dawn of Yahapalanaya, what was indeed perplexing for the public to fathom was his decision, as president of the SLFP, to grant nominations to the whole Rajapaksa brood of corrupt members to contest the election under the SLFP ticket; and, instead of a stay at Welikada, offer them the opportunity to gain a seat in Parliament, along with the attendant perks and privileges, including the licence to make a cool Rs 25 million profit overnight if they wished to sell their duty free car permit.

If Sirisena had given them nominations to prevent the UNP from gaining a landslide victory at the elections and thus control parliament and reduce him to a puppet president, the hung parliament that resulted have proved his calculations were spot on. But if he had also done so in the expectation that he would win the hearts of Rajapaksa loyalists, his gambit has not paid off but has condemned him further to suffer the slings and arrows they persistently hurl from their regained MP pedestals, thanks to the outrageous fortune the ingrates received, courtesy Sirisena. For the last two years the Sirisena government has been beleaguered by their assault; and presidential energies have been wantonly wasted on warding off their attacks rather than utilized and focused upon to heed the pressing call of the masses for a better future.

So much for expediency. Compelling political reasons and force of circumstances often dictate leaders, with an eye on self preservation, to follow that narrow short term course. But the presence of murderers and rogues, drug dealers and ethanol importers on the honourable list of SLFP members is but a blot on the party that has been the traditional heavy weight on one side of Lanka’s two party political see-saw. It’s an embarrassment to those right thinking members of the SLFP and an affront to the people that a major political party once wedded to democracy and newly betrothed to just governance should carry with it to the next election and thereafter, a whole gunny bag of rotten durians and hold it up as its proud public offering for the nation’s delectation.

Chandrika’s call to arms against the corrupt in the SLFP is timely. No doubt, in the early days of the Yahapalana government, she would have watched with mounting horror the reappearance of past ogres in the party fold – the very same monsters of corruption the masses probably had thought they had seen the last of – but realised she could do naught but hold her peace till the opportunity presented itself to speak out.

It is welcome that she has done so now, even at this late hour. It is creditable of her, as the sole active patron of the party, to have the gumption to declare that the party must even now break free of rogues and murderers and start anew to win back its lost credibility, especially when many in the SLFP are bound to pooh-pooh her view and say it will be a sure recipe for a massive defeat at the next elections. But will it be so?
Those who cling to such a notion, apart from their blind faith in the invincibility of Rajapaksa and the propagated myth of his much vaunted popularity in the country, are also playing the conjecture game, are they not? Their opinion that the SLFP will suffer a defeat if the Rajapaksa clan is booted out is no better or worse than Chandrika’s view that the party will increase its vote base if the party rids itself of the corrupt elements. For none can read the mind of the floating voter on whose decision, governments are elected or booted.

And what if the SLFP should suffer a massive defeat if it takes Chandrika’s advice and throws out the rotten apples?
For far too long, it has been the scandal of our times that the nation’s House of Representatives has been ridden with the corrupt, freely striding up its well, brazenly sitting on its benches, audaciously speaking out, as Chandrika said, ‘not out of love for the future of the country but only with the aim of scuttling the criminal investigations against them’, believing that attack is the best form of defense. It’s a national disgrace to have a people’s assembly filled not with honourable members but with those facing mega corruption charges and presently under criminal investigation.

Whatever should befall the SLFP, wouldn’t the nation as a whole be better off as a result of the SLFP cleansing itself of the sin for having entertained evil in its midst for so long? If that’s the price to pay to get the nation back on track, so be it.

But it should not be limited only to the Rajapaksa faction but against all, wherever they are found. After years of being tainted as the most corrupt main stream party, it is time the SLFP did some soul searching and rebranded itself by embracing the ethos of its founding father. In the last few years, the party has been used as a vehicle for the unscrupulous to gain power and with power won, gain a licence to indulge in corruption on an unprecedented scale. And it applies also to the UNP to root out the few incorrigibles found on their own oak tree, busy building their own nests.

Chandrika’s statement that the SLFP must break free from crooks becomes extremely relevant not merely in the context of her party but for the future of this country’s entire body politic. At a time when a new constitution is mooted and the speculation is that the executive presidency will be abolished or its powers greatly reduced and the supremacy of Parliament will be restored, it becomes even more incumbent of all political parties to ensure that in the forthcoming elections in 2020 that nominations are only given to men and women who are worthy of the honour to represent the people; and not to those who are notorious for their thuggery and corruption.

It may be said that the present parliamentarians with a history of corruption well known to the people were elected by the people. True. But did the people really have any choice in the matter? If the electorate is presented with a set of rogues put forward by either by the SLFP or the UNP as candidates and the people have no option but to vote for one of them, is it fair to blame the people or the political leaders who gave nominations to the rogues?

It should be noted that however great and pristine a constitution is, only clean candidates at the hustings will produce clean members of parliament which, in turn, will ensure clean government.

On March 12th 2015 all parties signed the PAFFREL 8 point criteria to be observed in giving nominations to candidates. The parities pledged, amongst others, not to grant nominations to those who are engaging or had engaged in the past in trades such as alcohol, drugs, bookies, casinos and prostitution that are detrimental to the wellbeing of the country, to those alleged of bribery or corruption, or to those who have abused power or caused destruction to the environment. Two months before the general election, President Sirisena signed the document on June 19th. All very well. But take a look around the Parliament chamber today. See for yourself whether the parties have followed the criteria they so grandiosely signed in a highly publicized show at the BMICH and pledged to follow.

Except for the absence of Duminda De Silva who was denied nomination despite Mahinda Rajapaksa’s heavy canvassing for him to be included in the SLFP list of candidates, and a few new faces, the present parliament is almost an exact replica of the old.

With President Sirisena of the SLFP and Prime Minister Ranil Wicremesinghe of the UNP – two men well respected and honoured and well known for their moral rectitude – it’s not too late for Lanka to forge a new clean political culture. It will be up to them to ensure that the candidates nominated to represent their respective political parties are of the necessary moral calibre. Lanka can no more afford to give into the dictates of political expediency and suffer its consequences.

For Lanka’s sake, give clean government a chance.