It had all started off so well.

As he delivered his first and last Spring Budget, it became rapidly clear that Philip Hammond had swapped his usual funereal tone for an upbeat tempo.

Often eyed suspiciously by Brexiteer ministers for his Remainer scepticism about the sunlit uplands of quitting the EU, the Chancellor had sought to combine his safe-as-houses demeanour with a bit of gusto.

Ditching the nervousness that highlighted his Autumn Statement, and perhaps taking his cue from the PM laughing like a drain in PMQs, Hammond instead leavened the statistics with jokes.

Jokes about his own longevity in the job. Jokes about Jeremy Corbyn being stuck down a black hole (top trivia alert: Stephen Hawking and Hammond went to the same Oxford college). Jokes about Labour knowing all about ‘driverless vehicles’.

‘Spreadsheet Phil’ had suddenly transformed himself into ‘Stand-Up Phil’.  The undertaker was the gag-maker. The heavyweight was trying his hand at light-touch Parliamentary performance. 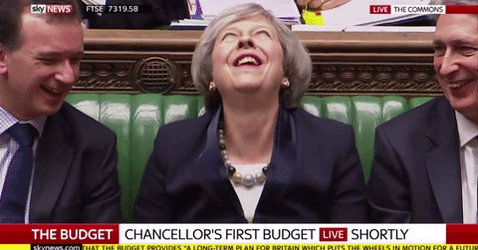 I’m told that some of the quips came from Treasury Chief Secretary David Gauke, whose wit and brain are as sharp as his boss’s. “Dry as the Gobi desert, both of them,” is how one colleague puts it. The Gauke had been uncorked and the Chancellor looked almost tipsy.

But as the titters turned into guffaws in the Commons chamber, it was Hammond’s passage about putting up National Insurance for the self-employed that caught the imagination of the audience outside.

Twitter lit up like a Christmas tree with images of the Tory 2015 general election manifesto and its ‘tax lock’ promise not to put up VAT, national insurance or income tax.

Aware that trouble was brewing, aides could see the social media ridicule in their officials’ box in the Press Gallery, but could do little about it.

As the cheers died down and Hammond sat down, Treasury officials began the usual post-match ‘huddle’ with journalists to explain the Budget. Yet it was obvious they had no real answers to fend off the charge that the manifesto pledge had been breached and breached almost blithely. 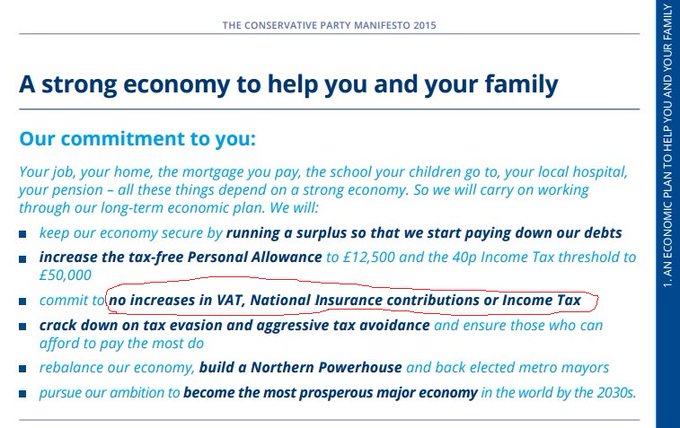 Looks like a 2015 Tory manifesto pledge has just been broken by #2017. https://www.bond.org.uk/data/files/Blog/ConservativeManifesto2015.pdf …

Worse still, it was clear that not much thought had been given at all to the ‘optics’ of how the NI rise would appear to all those just-about-managing, ordinary-working-families that Theresa May paid homage to on the steps of No.10.

“We will commit to no increases in VAT, national insurance contributions or income tax,” the Tory promise-sheet had declared.

Reporters almost felt sorry for the Chancellor’s political press aide as she tried an opening gambit on why the NI rise was in fact perfectly in tune with that manifesto.

When I asked why there was no asterisk or footnote pointing out the pledge didn’t apply to Class 4 NICs, she replied: “The manifesto is not the place for that kind of detail”.

Bizarrely, the spokeswoman appeared to suggest that the voters should have realised that the National Insurance Contributions (Rate Ceilings Act) 2015 – which was published after the 2015 election – justified the U-turn.

As the relentless questioning continued, a canary down the coal mine that the night’s news would be dominated by the row, the Treasury aide even attempted this brave line: “This Government has kept its manifesto promises.” The ensuing laughter among the media proved that it wasn’t just Corbyn who was having a tough time.

To be fair to the Labour leader, and contrary to some reports, he did actually pick up on the tax hike in his Budget response. “We have long argued for a clampdown on bogus self-employment but today the Chancellor seems to have put the burden on self-employed workers instead,” he said.

But he didn’t ram home the ‘Spite Van Man’ narrative that was picked up by the Lib Dems (who couldn’t resist the ‘OmNICshambles’ attack line) and the SNP.

In fact Stewart Hosie, the SNP’s ‘Shadow Chancellor’, was on top form. He declared ‘the party of aspiration’ was now ‘taxing those who are self-employed, putting in active, real, hard disincentives to starting businesses, to employing people, to stepping out on one’s own’.

As the B-word didn’t pass Hammond’s lips, Hosie added that “Brexit was the word that dare not speak its name”.

It’s not as if MPs hadn’t been warned about the NI plans. The Sun, the red-topped badge of pride for the White Van vanguard, had the scoop on Saturday that National Insurance was set to ‘clobber’ even the hard-pressed workers in May’s own constituency. Even Tory MP Jacob Rees-Mogg had “slammed it as a new pasty-tax”.

Yet just as George Osborne famously swanned about on Obama’s White House lawn days before his own Omnishambles Budget of 2012, the Treasury seemed too convinced of its own infallibility to realise a political problem loomed.

Its civil servants love ironing out ‘untidy’ tax differences, especially when ministers call them an issue of ‘unfairness’, but tax rates are even more tricky than Greggs’ hot snacks.

Hammond and May could be forgiven for thinking this whole issue was one big hospital pass handed to them by Osborne and Cameron.

The former PM’s speechwriter Ameet Gill admitted on Radio 4 last year that the very idea of a ‘tax lock’ was dreamed up by No.10 and No.11 “because we had a hole in the [media] grid and we need to fill it”.

Still, the fact that the PM and Chancellor failed to spot that this would blow up on Budget day perhaps proves that they’re sometimes more alike than they’re given credit for.

Both pride themselves on asking for every detail of every policy and poring over it. And both sometimes miss the wood for the trees. May, like many of her predecessors in No10, may now feel even more emboldened to challenge the smooth Treasury reassurances about its orthodoxies in future.

May and Hammond will hope that this row blows over and that it’s the product of a hungry media starved of excitement on Budget day and bored by pre-briefed leaks.

As Osborne’s former aide Rupert Harrison reminded us all, the pasty tax faded in time – though not without concessions. Harrison also made the astute point that this was not a giveaway Budget, a pretty sure guide that there will be no snap election.

On Wednesday night, at the meeting of the backbench 1922 Committee, Hammond was asked by three Tory MPs about the NI rise. John Redwood (an arch Leaver) and Andrew Tyrie (an arch Remainer) were united in their unease.

And the most telling question was from James Cleverly, who wanted his very own national reassurance contribution from the Chancellor. The backbencher said MPs were prepared to go out and defend this NI rise, but only if the Treasury didn’t subsequently ditch it when the media heat got too hot.

That was too often the Osborne way. Hammond told him he had no intention of backing down, as the overall principle was about fairness between employed and self-employed.

MPs went away more reassured. But the jokes, and all the japes of the Commons chamber earlier, weren’t quite as funny any more